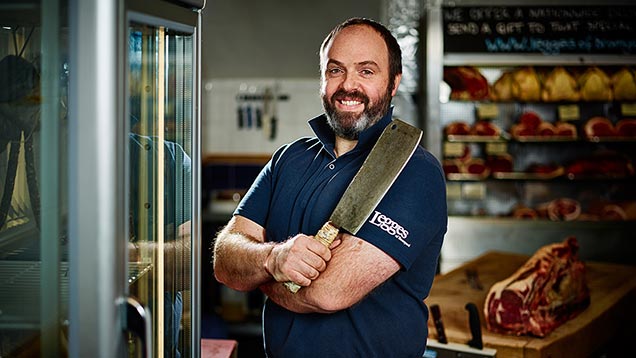 Anthony Legge was actively farming throughout his school years, with his own livestock to look after from a young age.

He recalls being far more interested in what was happening in the agricultural world than what was going up on the blackboard.

“I’d get back and Dad would ask ‘what did you learn today?’ and I’d tell him who was doing the chain-harrowing or the combining – but I couldn’t remember much of what had happened in my lessons.”

He was the fourth generation of farmer to be born at Shortwood Farm, Pencombe, cutting his teeth on 65ha of mixed livestock and dairy.

When his father advised him to get another trade under his belt before joining the family business, a 15-year-old Anthony took a work experience placement at a butcher’s shop in his nearest town of Bromyard.

To make a 1lb pie, we use ingredients sourced 100% from Herefordshire, cooked in a hot water crust pastry and served as part of a perfect ploughman’s lunch.

Combine all of the above ingredients in a bowl.

Fill pastry case with mix and place a pastry lid on top.

Cook in a moderate oven (180C) for one hour and then fill top of the pie with gelatine through a small hole in the top of the pastry.

Leave to cool for 2-3 hours and serve with pickles.

At the end of the school term, he started there full-time, learning traditional butchery as an apprentice and eventually becoming fully trained.

After a few years, Anthony moved over to practise butchery in a supermarket, and it was this change that inspired his dream, providing him with the vital skills in getting the retail side of a butchery right.

It wasn’t until six years later, in 2000, that the moment for Anthony to branch out on his own arrived. “When the chap I’d been working with was retiring, I was offered the opportunity to take his shop as my own.

“The combination of retail and butchery came together, and I knew I just had to take the plunge.”

Legges was at the heart of the rural community it was serving, providing an alternative to supermarkets that had been dominating the food industry.

In February 2001, the outbreak of foot-and-mouth disease created a nationwide dialogue on the traceability of British meat.

Not only did the pandemic send the farming community into chaos, it raised key questions in the media about the management of livestock movement.

“Foot-and-mouth was massive,” recalls Anthony. “It was absolutely devastating for a lot of people.

“Everybody saw those terrible pyres and all those animals being burned.

“Straight away after that, people started saying: ‘Why is this livestock being delivered up and down the country from various meat buyers in various markets? Why is everybody trying to get a cheap deal on this cattle?’”

With the majority of Anthony’s meat supply coming from within a five-mile radius of the shop, when the public started asking questions, Legges was perfectly placed to answer.

“On the news, they were showing how these cattle were carted all over the country, only to come back to probably where it originated.

“People started to realise on a mass scale that buying from your local butcher means an animal has made one journey, to one abattoir, and on to one shop.”

Although Herefordshire was declared free of the disease in November 2001, it took many farmers years to get back on their feet. Many were forced to diversify to sustain their farms. Those acts of perseverance still shape the Legges shelves to this day.

“We now stock about 50 different suppliers of local beers, ciders, cheeses, breads and vegetables, to name a few. That awful time was the catalyst for change for many local people here.”

When it comes to diversification in 2015, Anthony is all for it. “As a farmer you have a wealth of knowledge you don’t perhaps give yourself credit for.

“Lots of farmers are incredibly practical – they can adapt to different situations, are good at knuckling down and working hard to get the job done. Those are the skills you need.”

A typical day for Anthony starts at 5.30am, where he will do the same “hedgerow farming” he has since childhood, but it is when Anthony arrives on site that he transforms from farmer to businessman.

“I get to the shop about 6.30am and it’s all go from there – cooking for the hot sandwiches, responding to emails and social media. I take pride in getting the shop window just right, so the team works on that as soon as they arrive until we open at 7.30am.”

Anthony has found his niche with his 100% Herefordshire pies, which take inspiration from vibrant local characters.

The kitchens attached to the shop are the creative hub of the business, where new pies are crafted, different sausage flavours trialled, and his team encouraged to create new products based on customer feedback and seasonal availability.

It is this freedom that Anthony values most in the business: “Being able to create a new sausage flavour – sometimes it works, sometimes it doesn’t – just trying it out is great fun.”

His day is divided between speaking to customers, staff and suppliers, where he takes his opportunity to catch up with local farmers.

“I hear how the lambing is going, the weight prices of the cattle, the problems of rearing outdoor pigs in terribly muddy conditions and such like. It really would be impossible to feel left out.”

When asked if farmers make good butchers, Anthony states they are without a doubt the best. “Without that knowledge of the livestock, you’d be no better than a supermarket really.

This way means you understand the different types of meat throughout the year – where and when the lambs are in their prime, the condition the cattle put on through the summer months.

“Butchers only provide the last bit of the journey of that animal, the real hard work is done out on the farm – we just cut it and present it to the customer.”

Although the public are consciously eating less meat, Anthony doesn’t see a sell-by date on the boom of independent British butchers. Businesses, he says, have to evolve alongside consumer habits.

“If this new generation of butcher has come through victorious after competing against what supermarkets and major retailers are offering, they will be well situated to handle the next chapter in butchery.

“The best quality livestock in the world is being reared in this country; all we need to do is source it and get it out there.

“If you combine that with all the other artisan producers in Britain, you realise that the food industry has got a lot to be excited about.”