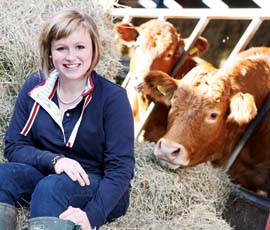 20-year-old Harriet Wilson is going into her second year at Harper Adams, where she is studying for a BSc in Agri-Food Marketing with Business. Back home she manages her own herd of British Blue cattle on the family’s 300-acre farm in Haughton, Stafford.

My ideal Friday night does not usually involve being covered in disinfectant and holding a very heavy womb in my hands.

But in this particular situation the calf wanted to come backwards out of this show cow and with only one vet available I stepped in to lend a hand… or two. Although the cow suffered minimal pain, it was all a bit too much for me and I had to rush outside.

I must admit that I was concerned about what I was going to talk about in this month’s column, but after writing it all down I realised that I had, in fact, travelled the country a lot (no change there).

My first trip was to the ABP Food Group plant in Ellesmere. I was lucky enough to be chosen as a scholar in 2010 and this covers my four years of study at Harper Adams. I receive lots of guidance from them and have another work experience placement lined up at Easter – they’re really committed to supporting young people in the industry.

The following night I attended Asda and ABP’s annual BeefLink producer group meeting. Jim Viggars opened the meeting with a review of Asda’s performance during 2011 and discussed future events that will attract tourism to the UK during 2012; meaning a higher demand for meat. We also listened to speakers from The British Seed Houses and KW feeds on grassland management and alternative feeds.

Somewhat more out of my comfort zone, I undertook my first London driving experience to visit the McDonald’s head office in East Finchley. I got there in one piece, but to my horror I went down to lunch to find a fully operational McDonald’s restaurant in the canteen. This is probably going to be my biggest test of willpower in my life to date. I can’t eat a burger and fries every weekday for a year – it’ll play havoc with my figure!

On a more serious note, the office is lovely, I will be working with some fantastic people and I am really looking forward to starting in July.

The Cattle Breeders Conference was another highlight, which myself and fellow young breeder Rhys Millichap were sponsored to attend by the British Blue Society. My favourite speaker of the day had to be the beef and sheep farmer Charley Walker, who had the audience’s full attention when he explained his three guiding principles: Nature, Nurture and, erm, Nudity. By Nudity he was referring to the breed of sheep that lose their wool (not young farmers), no shearing suited his low-input system and meant less labour costs and reduced risk of flystrike.

My duties as a YFC county officer have also continued to clutter my diary with our county quiz, bowling competition, the Willy Wonka Ball and a huge social night to recruit new members. We have now got stuck into the Spring Social Calendar at Harper Adams, which is more eventful and quirkier than ever.

To celebrate Burns Night this year, a Ceilidh band joined us in the bar and put students through their paces. The bar was full to the brim for our next visitor; the fantastic Jaguar Skills. His DJ set was amazing and being press officer I was able to climb up on stage with him to take photos. My next photo opportunity – the male and female strippers night – was less pleasant. I’ll say no more.

Following on from that frightening experience; Steve Ward of Newport Sports took centre stage in the bar whilst the students watched him bravely have his locks chopped off in a bid to raise £1,500 for charity.

One of the charities – the Harper Adams Development Trust – was chosen in memory of student Tom Haseley who passed away recently. I was fortunate to become friends with Tom on our first night back at Harper in October. Tom was a final year student with a great personality and because of his fun-loving attitude to life, he had a huge circle of friends at Harper and will be greatly missed by all.