About £12,000 for a second hand Astra and £9,000 for an old Landrover – these are just two of the astronomical quotes given to Farmers Weekly readers by their insurers.

We also heard about quotes for 1.1 litre compact cars topping £4,000. We heard about premiums rising by as much as £500 year-on-year despite driving the same car with more road experience and a completely clean accident history. And we were told about young drivers who switched to smaller-engined cars in lower insurance groups only to find their premiums going up by hundreds of pounds.

It’s not just hearsay – your stories are backed up by the latest industry figures. According to a study conducted by the AA, the average premium for an annual comprehensive car insurance policy has risen by more than 40% over the past 12 months. For drivers between the ages of 17 and 22 it stands at an even more eye-watering 64%.

Spotting the upwards pattern is easy, but identifying the reasons behind it is less clear cut. Assuming Britain’s drivers haven’t become more reckless overnight, why is it getting so much more expensive to drive?

One of the biggest culprits is the rise in fraudulent motor claims. In the UK, bogus motor insurance claims worth over £1.1m are exposed each day. When you learn that a typical whiplash injury for a single individual can add £4,000 to the cost of a claim you start to realise where the price hikes are coming from.

Another problem is uninsured drivers. The Motor Insurers Bureau puts the cost of uninsured drivers in the UK at more than £500m every year, which it estimates adds £30 to every honest motorist’s annual premium.

What do you think of high insurance premiums? Share your thoughts and see what others are saying on our forums.

And finally, age. While youth might more commonly seen as an advantage, there’s no escaping the statistics relating to young drivers. One in five are involved in a crash during their first year on the road, and if you’re male the numbers look even worse. Male drivers under the age of 21 are 10 times more likely to have a car accident than male drivers aged 35 or over, and the resulting injury claims are a major cause of premium increases.

“We insurers must do what we can to keep costs under control, however, the problem also reflects the growth of a compensation culture, where we are encouraged to find someone to blame for every accident; and with that blame comes potential financial gain.

“Not only has this increased the amount of fraud, but it has changed the way we think about accidents. Twenty years ago accidents were often seen as simply bad luck. Nowadays, an accident is seen as an opportunity to gain compensation, and a whole industry has sprung up to handle those claims. In the end, the cost of the compensation culture is paid for by everyone through higher premiums, and we must ask ourselves: Are we, as a society, happy about that?”

Farmers, farm workers and rural dwellers are probably less happy about it than most. Aside from burning a big hole in your wallet, soaring insurance costs can have a real impact on day-to-day life in Britain’s countryside. Private car ownership is often the only option in isolated areas, where residents don’t have the convenience of public transport on every corner. If you can’t afford the premiums, life can come screeching to a halt.

“Living in rural areas is already an expensive business,” says Jill Grieve, head of communications at the Countryside Alliance, “but with fuel and insurance prices continually rising it is especially tough for youngsters who want the independence a car can bring, but cannot afford to buy, fuel, maintain or insure a vehicle.

“We have heard from younger members who are reliant on their parents for lifts because they just cannot afford their own car. The countryside has an ageing population and youngsters who want to live and work in the countryside face so many barriers. Insurance companies should be more alive to the ‘rite of passage’ element of car ownership, especially for the young in rural areas who want independence, but are priced out of the market.”

Having four wheels becomes even more critical when you need that car to earn a living, not just to visit your mates in the next village. Seventeen-year-old Dave McLean who lives in the Scottish Borders pays £1,700 to insure his 1.1 Peugeot 206, which he uses to travel the two miles to work every day. He has also been lambing at another farm in his holidays, which is about four miles away, so for him “not having a car isn’t an option.”

To add to the problem, many farm workers require bigger and more powerful vehicles to tow trailers and livestock boxes – vehicles that command even higher insurance premiums. When 18-year-old Sebastien Belgeonne from Somerset was quoted just over £2000 for a 1.1 Peugeot 106, he realised his hopes of getting a Land Rover to tow a cattle box were out of the window.

“Not being from a farming family I couldn’t put the car on the farm insurance and the cheapest quote I got for a Land Rover was £8,500. The prices for insurance are astronomical, and make life hard when you have to drive to the farm four times a day as well as drive calves about and make runs to the suppliers.”

The most staggering insurance quotes tend to be given to young men like Sebastien, who, statistically, are more of a risky prospect for insurers.

But new legislation coming into effect in December next year means it will be illegal for insurers to offer different prices to men and women. Levelling the insurance playing field will be good news for men who could see their premiums falling, but less so for women whose costs are likely to soar to compensate.

It could be tempting to get a bit creative with the information you give to insurance companies to keep your quote affordable, but be warned says Simon Douglas, director of AA Insurance – it could backfire.

“The record rises in fuel costs coupled with spiralling car insurance premiums is making driving unaffordable for many, especially for cash-strapped young drivers. This is leading to more people withholding information when taking out a policy or exaggerating personal injury claims to try to reduce their costs. But this simply piles on costs for insurers and results in yet higher premiums for honest motorists.” 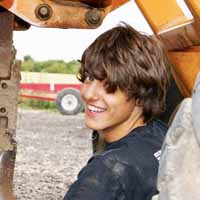 Eighteen-year-old Adam Horsfield lives with his parents in Great Wilbraham in Cambridgeshire where his dad manages a 400ha arable farm growing wheat, peas, chick peas and sugar beet. He has been studying for his A-Levels for the past two years and works on the farm during school holidays.

Adam passed his driving test in July 2010 and currently drives a 1996 Vauxhall Corsa which is insured for £1,700. His policy is based on driving with a GPS tracker device. If he moves the car between 11pm and 5am (peak accident time) he is automatically billed an extra £60.

“I use the car for everything,” Adam told Farmers Weekly. “The nearest village is two miles away, the nearest bus stop is five miles away and the college where I’m doing my A-Levels is a 20-mile round trip. If I couldn’t afford to run a car, I’d be reliant on my parents to take me everywhere. I wouldn’t be able to go and visit my family in North Lincolnshire on my own, I wouldn’t be able to get to college and I wouldn’t have a social life. There’s not much more than a Post Office in the nearest village, and there are only two bus services a day at the bus stop. Plus, as chairman of my local Young Farmers, having my own independent transport is important.”

Earlier this month Adam was quoted more than £9,000 by Aviva to insure a 1984 Land Rover 90 – more than nine times the car’s estimated value.

“I could probably stretch to around £2,000-2,500, but only because of the job I have on the farm, which pays fairly well. It might just be the case that this particular company doesn’t want to insure young drivers, but I was still quite amazed. I understand that young drivers are a bigger risk, but insurers operate on a basis of ‘innocent until proven guilty’. At least the tracker system gives you the opportunity to prove you’re a responsible driver.”

While trackers can be cost-effective for some, Tim Price from NFU Mutual advises farm workers to approach these policies with a level of caution.

“Often, they restrict what times you can use the car, which could cause a problem if you’re working late, in the middle of calving for example. It doesn’t work for everyone,” he says.

I just got my renewal price through. I’m 20 and driving a 1.2 Clio. Despite now having three years’ no claims, they’ve put my premium up by £100 for the year. Go figure. Cheryl Suzanne Williams

I have just passed my driving test, I bought a 1litre VW polo and the cheapest insurance I can get is £3,400. It’s ridiculous seeing as I have been driving a moped and tractors on the road for well over a year – surely they should take this into account. Jack Sherborn

My friend has recently passed her test, and her quote with a tracker was just over half that without. Michael Neaverson

Currently looking to insure my younger brother in a small R-reg farm car. Have had quotes up to £6k. Richard Oliver

To insure my Land Rover Defender they wanted £5,500. They suggested I buy a smaller car. Now you tell me how I’m meant to tow a livestock trailer with a tiny little car. Freddie Wood

HOW TO BRING YOUR QUOTE BACK DOWN TO EARTH

Every vehicle is ranked into an insurance group from 1-50, determined by the price of the vehicle, the performance of the vehicle (acceleration and top speed), the price of parts, the cost of repairs and security. Quiz your dealer and keep these criteria in mind when buying your car.

Adding features like fins and spoilers is likely to mean a higher car insurance bill.

If you run several vehicles it can be cheaper to add another driver to a farm or fleet policy, rather than taking out a new one.

This alternative insurance system involves fitting a GPS tracking device to your car. The device sends the details of your journeys by satellite to your insurance company and at the end of each month you will receive a bill. The less time you spend on the roads, especially high-risk roads during peak accident times, the lower your bill at the end of the month (see case study).

Insurers and brokers offer discounts on car insurance to newly qualified drivers who have completed the Driving Standards Agency’s Pass Plus course, which includes modules in night driving, motorway driving and driving out of town.

If you’re driving a vintage model you might be able to save money by insuring it with a specialist classic car insurer.

Some insurers will offer a lower quote if your car is kept in a locked garage overnight, while additional security devices like alarm and immobiliser systems can also attract lower premiums. Sometimes newer models will actually be cheaper to insure than older models if they have better safety features.