Whether you are religious or not, there remains a lot of truth in the old adage of “a problem shared is a problem halved”.

But talking through problems is not always easy, especially when working in relative isolation or, perhaps more awkwardly, the problem involves the very people you live, work and socialise with on a daily basis.

It is an issue that is more common on close-knit family farms where there may be fewer outside people to draw on for help and support in the event of a dispute, financial or other issue, than on larger businesses with more employees and outside advisers.

“Small family farms tend to be where I spend more of my time,” says the Reverend Janet Nicholls, an agricultural chaplain for the Diocese of Chelmsford.

“Coming from a farming family myself, I am very aware of the pressures families are under.

“When you live, work and socialise together, big issues in any one of these areas can quickly affect all three.

“With fewer people working on farms, isolation is an increasing issue, so being able to talk to someone is becoming much more relevant.

“Having a person that will listen non-judgementally is often what people want, but sometimes it also helps to just share a laugh.”

As an ordained priest in the Church of England and rural adviser to the Diocese of Chelmsford, Rev Nicholls has her Christian faith at the heart of her work, but insists the chaplaincy support is available to all, regardless of their beliefs.

“Many of the calls I receive begin with ‘I’m not religious but…’,” she says.

“My role and that of other agricultural chaplains around the country is mostly about providing pastoral care and support to rural people, not preaching to them.”

Rev Nicholls says her chaplaincy support is flexible and varied. 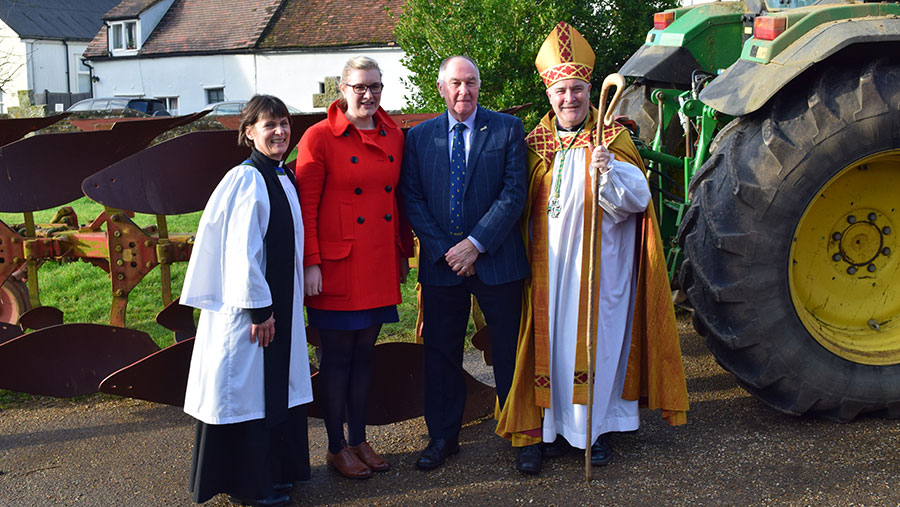 “Some people value the faith dimension.

“This has included blessing a new combine harvester at the start of harvest and praying with farmers around the kitchen table.

Having a person that will listen non-judgementally is often what people want, but sometimes it also helps to just share a laugh Reverend Janet Nicholls

“Others simply appreciate sharing their concerns with someone they can trust and who understands the unique demands of farming.”

Younger and middle-aged farmers tend to be more willing to pick up the phone and ask for help than older farmers, whereas use of the Facebook page is spread across a whole range of ages, she notes.

Despite some modest improvement in farm profitability recently, financial worries remain top of the list of concerns, especially on traditional family farms that have not diversified and are more reliant on pure farming income, says Rev Nicholls.

Financial difficulties often get hidden from society behind the façade of a supposed “big house” in the country and in many cases people find it hard to admit when there’s a problem, she says.

Anxiety around the future for UK farm subsidies post-Brexit has fuelled financial concerns in recent months and may prompt big changes to some farm businesses in the future, but Rev Nicholls says the issue is very complex and in some cases has been divisive.

“I’ve seen a real mix of views towards Brexit even within individual families.

“It’s likely to require a complete rethink for some farms, but at the moment it’s the uncertainty that is proving difficult to live with.

“Farmers seem to appreciate the opportunity to share their opinions with a chaplain, knowing that it is a ‘safe space’ to air their views.

“They know I listen to their specific concern rather than responding from either a leave or remain stance.”

Depression, sometimes but not exclusively linked to isolation, is another recurring issue among farmers, but is something that more people seem willing to talk about than in the past, says Rev Nicholls.

Admitting there is a problem is the first step in tackling depression.

If asked for further advice, she usually encourages people to talk to their GP.

Rev Nicholls supports initiatives such as the Fit for Farming manual published by Haynes and the Men’s Health Forum which provides a guide to help farmers manage their physical and mental health, and links to services that can help.

Relationship breakdown and divorce is another big issue that can cause great stress and anxiety and may result in long-lasting splits in farming families if issues cannot be resolved.

“It’s often in these sorts of cases that people really appreciate having somebody impartial to talk to.

“Farming families can be under tremendous pressure when living and working together, so sometimes it’s important to take a step back and make the time to enjoy different things together as a family,” she adds.

While the role of agricultural chaplain is primarily to listen to concerns rather than provide specific advice or help, Rev Nicholls and other chaplains work closely with a number of organisations, such as the Farming Community Network, Royal Agricultural Benevolent Institution, Arthur Rank Centre and NFU, to provide additional support if needed.

She is also involved with local Young Farmers’ Clubs, the Rural Community Council of Essex, a regional crime prevention panel, and is on the strategic board of the Essex Rural Partnership, where different organisations address rural issues in the county.

There is a national Agricultural Chaplains Association and Rev Nicholls invites anyone who would like to access the support of a chaplain to get in touch with their local diocese or The Arthur Rank Centre (see ‘Support contacts’, above).

With a background in education before joining the church, Rev Nicholls remains keen to address the lack of understanding among the general public about where food comes from and the importance of agriculture.

“I see a big disconnect between food and farming; people just don’t understand it in the way they used to,” she says. 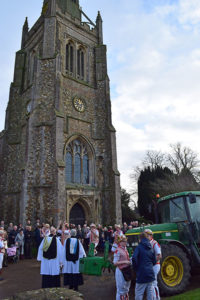 “During the Brexit negotiations, it seems especially important that people understand the basics of food production in the UK to ensure the public are motivated to support British agriculture.”

From attending agricultural shows and Open Farm Sunday events to organising agricultural church festivals of Plough Sunday, rogation, Lammas and harvest, she takes every opportunity to remind people young and old about where their food comes from.

This was a key theme addressed to the 200 people at a recent Plough Sunday event held in Thaxted Church in north Essex on 8 January.

The traditional celebration traces its roots back to medieval times when many English villages had a communal plough that was stored in the church over winter and brought out when workers returned to the land after the Christmas break.

As the nature of farming has changed so the service has evolved to become more of a contemporary celebration of the work that farmers do, although some of the traditions, such as blessing the plough, the soil and agricultural workers remain, along with regional customs such as Morris dancing.

“It’s great to see so many rural people come together at what is quite a gloomy time of year and is a real opportunity to support our farmers and show how highly we value their work,” says Rev Nicholls.