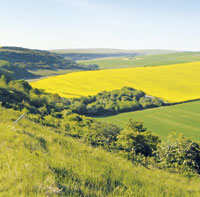 Two different arable farming prospects have come to the market, but both are priced to sell and would suit farmers or outside buyers looking to make their investment pay its way.

Rathfinny Farm, between Lewes and Eastbourne in East Sussex, is one of the largest farms on the South Downs to be sold in modern times, according to agent Handleys. It runs to 594 acres of mainly south-facing chalk downland with silty drifts.

The farmhouse is a three-bedroom, single-storey dwelling with views over the English Channel. A four-bedroom dwelling is also included in the sale.

“A number of farmers will be keen to have a go,” said Ted Handley of Handleys, Mayfield. “Nothing like this has been available in the area for a considerable period of time.

“But it will also appeal for those with a chunk of money to invest Ð there are plenty of people looking at land as a safe haven.”

Potential purchasers can either stump up the £3.5m asking price, or could purchase shares in the limited liability company that owns Rathfinny Farm. “That could save a lot of money that would otherwise go in stamp duty,” said Mr Handley. (Handleys 01435 873 999)

Unlike Rathfinny, whose land rises by about 100m from its southern edge towards the top of the downs, Bunkers Hill Farm at Laughton in Lincolnshire lies just above sea level.

And, rather than free-draining chalky soils, the land consists of 768 acres of predominantly grade 1 warp soils. Recently the farm had a reputation for being wet and it struggled to live up to its soil classification, said Stephen Hall of Savills.

“Anyone who still thinks this needs to take another look,” he added. “The current owners have spent a lot of time and money maintaining and improving the current system, getting the farm back to where it should be. I’d say four-fifths of the land is now grade 1.”

The land is lotted two ways – at 504 acres and 260 acres – but is open to negotiation. There is also a substantial range of modern buildings, including about 4000t of grain storage. “And there is enough irrigation to support root cropping in a sensible rotation,” said Mr Hall.

A pair of two-bedroom, semi-detached cottages on short-term lets is available separately.