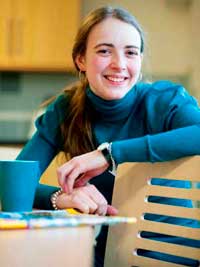 I can now proudly say I’ve been sheep gathering off a Lake District fell for the first time.

Certain farmers might be justified in saying I didn’t do so much “gathering sheep” as I did catching my breath. In my defence, I’m a soft lowland-farming student and they didn’t set off up that fell side for a leisurely stroll.

We were gathering sheep off the Eskdale side of Scafell in the South-Western Lake District. If you watch Countryfile, you might recognise that the valley was recently filmed for a feature on hound trailing across the fells.

It felt more like July than April, without a breath of wind on even the most exposed areas. Despite that, there were still deep pockets of snow near the top that cooled you down just to look at them. Through the worst of the snow early this year, people in the valley even had their heating oil freeze.

I think you’re supposed to feel small and a sense of insignificance in this world when faced with such a huge view of mountains, valleys, tarns, lakes and sea. But when you’re looking down on everything from such a windless platform, you can’t help feeling the opposite.

Bizarrely, we found a tuna sandwich up there (which the dogs didn’t think all that much of) and one of the farmers, Tom, told me about a man who sold tea on the top of Scafell across one holiday season. He lugged water up there on an early morning, set up camp and charged a pound per cup – selling out every day.

Thankfully coming down was easier than climbing up had been and seeing the small flocks merge into larger ones and head down the main path was quite a sight.

At the end, with pains in my legs and the most desperate craving for a pint I’ve ever experienced, Tom said it was the most relaxed gathering he’s done.

I have Dave and Marie at Wha House, Eskdale, to thank for that experience. To remember it by, until next time, they’ve given me a shepherd’s crook made with the horn of one of their own tups. It’s been handmade by a farmer in neighbouring Langdale who gives the proceeds from their sale to the air ambulance.

I know some people will be sick of hearing about sheep and mountains now, so I’m going to refocus on East Yorkshire. Recent livestock-related experiences there have been linked to cattle and poultry.

We’ve had a couple of lessons in cattle foot-trimming. The first one was a vet-run workshop and involved practising on a foot which had been salvaged from an abattoir and tied to a metal post at the typical height for trimming.

Because it had been soaked in formalin for several hours for biosecurity reasons, it was rock hard.

Having no live cow meant a floppy foot that was hard to do anything with. But, it didn’t kick and there was no excrement to go down your neck.

The second lesson involved live cows, with all the pros and cons that entails, but I have to say I preferred it.

As for poultry, I’ve gone and bought my first two chickens encouraged by college friend, James (who’s an aspiring poultry farmer) and after seeing my first large-scale chicken farm. My two chicks are certainly “small fry” in comparison, but they’re paving the way towards more ambitious plans.

At college we’re now into exam revision and the final run of assignments. To name a few: Integrated Crop Management, Opportunities for Young Farmers – related to potential government policy changes, Comparison of high-tech and relatively low-tech tractor models, and Entrepreneurial opportunities related to climate change. After we’ve finished this academic year, it may take a while for this computer to regain any novelty factor.

But summer is beckoning with harvest to look forward to, and some slightly less dramatic sheep gathering for shearing, foot-trimming and other routine treatments.

My own lambs are growing fast and I need to come to a final decision as to what their fates will be. Sell all the lambs? Keep the females? This farming lark never lets up!

Lizzie Jennings, 21, is in the second year of a two-year foundation degree course in Agriculture at Bishop Burton College in Yorkshire