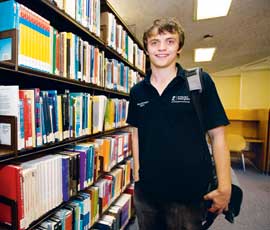 The faulty fire alarm in my flat is much like the Radio 2 DJ Vanessa Feltz. Both were clearly installed in their current positions by someone who should have known better and both of them start working at around 5am every single morning.

In fact, the only difference I can think of is that the sound of Vanessa’s voice doesn’t make you hurriedly evacuate the building in your pyjamas and queue up in a dark, wet car park.

Tired I may be, but at least my dissertation is handed in and exams are officially over. The teaching of my course was wrapped up in glorious sunshine with a visit to Blankney Estates near Lincoln, a large farm growing a huge range of crops. They are one of the world’s largest producers of chlorophyll from grass for use as a natural green food colouring and it was really interesting to see both a novel process and a great example of a farm adding value to what it produces.

With only a presentation and potential spoken exam to go, it’s probably about time to think about results day and the inaugural Summer Ball that follows. If there’s one job in particular that I’m not looking forward to starting before then though, it’s helping to move the contents of the Students Union storerooms.

You might think that such a task would not take too much time and effort, but unfortunately you’d be wrong. The trouble is that if any of these half-a-dozen hidden rooms have been tidied and sorted since about 1995, they certainly don’t look any better for it. Stepping inside some of them is like playing Jenga – one wrong move and the whole lot could come down.

Items that I have definitely encountered at some time in the last three years, and know to still be in these rooms, include a pantomime horse, a vending machine and a full-size papier-mâché rear end of an elephant (don’t ask). To give you an idea of just how much stuff there is hidden under 30 years of dusty brochures and broken printers, I no longer know where any of these items are any more.

The reason behind the big move is that the building containing our offices is due for demolition this summer. It’s a shame, because the Amenities Centre – as it is now unromantically called – started its illustrious life as a cheese- and butter-making facility before the Sutton Bonington campus became part of the University of Nottingham in the 1940s. It still maintains much of the original character.

As an aside, the campus’s prior incarnation – the Midland Agricultural and Dairy College – started on the site straight after the First World War, with the newly constructed and very grand main building commandeered as a prisoner of war camp for German officers until 1919. Some of them attempted an escape in 1917 by digging a tunnel under the barbed wire, hiding the spoil under the sloping floor of what is still a second-floor lecture room in the same format. Of the 20 or so officers that escaped, the furthest any of them got was about 10 miles.

With the campus increasing exponentially in size over the past few decades though, it’s now clear that the Amenities Centre is both unsuitable and in completely the wrong place. In its footprint will be built – among other things – a new dining hall, shop and a new bar to replace the current one.

Now I’m sure that most SB alumni will remember the old bar with a huge amount of fondness, just as I will. But if you’ve spent three years trying to organise events in it like I have, you will know that a H-shaped room with six unlockable entrances is not exactly ideal. On a particularly big night I once gave a bouncer the job of guarding two of these doors at the same time, and after 10 minutes he radioed me to say that he was “sweating like a newspaper editor trying to unblock a paper shredder”.

Well he didn’t exactly say that. What he did say was slightly more agricultural I suppose, used nearly the same format and involved a nun.

20-year-old Michael Neaverson is heading into his third year as an undergraduate Crop Science student at the University of Nottingham. Michael is from a farming family in South Lincolnshire and is involved in all aspects of the 600-acre business – wheat, barley, sugar beet, cress seed and marrowfats.

Read more of our College Calendar writers’ columns on our dedicated page.