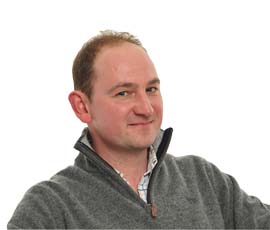 “Hang on, this isn’t going to work. There’s only three of you on the left side.”

Once I quite liked going to conferences. I spent my early years on a small farm in the middle of nowhere and so it was a chance to meet people and to hear about the wider world. I’m not so fussed about all that any more. I no longer get star-struck when I see NFU president Peter Kendall. I don’t need to wear a name badge or look at a Powerpoint presentation to know that burning fossil fuels is bad. I don’t stand wide-eyed and open-mouthed at the suggestion that farmers collaborating or adding value to their products is a good idea. Most of all, I don’t want to queue up anymore to drink a horrible coffee from one of those flasks with a pushy lever on the top.

These days, I’m happy to read the gossip on Twitter and get on with some farming. The big picture is all very well but I spent years listening about global food shortages then came home to an empty fridge when the shops were shut.

Everybody says the same old stuff at conferences, anyway. They only change the record every five years. A decade ago you couldn’t throw a bread roll at a conference without hitting someone who was telling that story about how many tonnes of barley we would need if everyone in China drank a bottle of beer. I don’t know what that tired cliche did for the sales of Tsingtao, but it sent me heading for the bottle.

If you go to a conference these days, everyone rattles on about the global population reaching nine billion by 2050. What’s the effect of this revelation? Does everyone run for the door to start growing more food? Of course not. They organise another conference to discuss it a bit more.

The nine billion population has been discussed so exhaustively that it’s now a target not a prediction. It has become a coathook for agribusinessmen to hang their point upon. My five-year-old godson could tell you that population growth follows increased food supply and not the other way around – maybe I shouldn’t discuss agricultural economics with him so much.

I didn’t even go to the Oxford Farming Conference this year. It’s a great city, I love the debate and they serve Danish pastries in the press room. Even this didn’t lure me away. My year’s mapped out – I’ll spend every spare penny on renewable energy, water storage and input efficiency and I’ll add value to our products. That’s all I need to think about in 2012.

For stimulation I’m going to Thailand to a yoga and cookery school instead. It’s like Oxford but with more pampering, a less draughty room and without the fire alarms going off at 6.30am. I considered going skiing, but I’m too busy to break bones; breaking wind I can just about fit into my schedule. I’ll see you at Oxford 2013 instead.

What do you think about Oxford and other farming conferences? Have your say on our website forums.