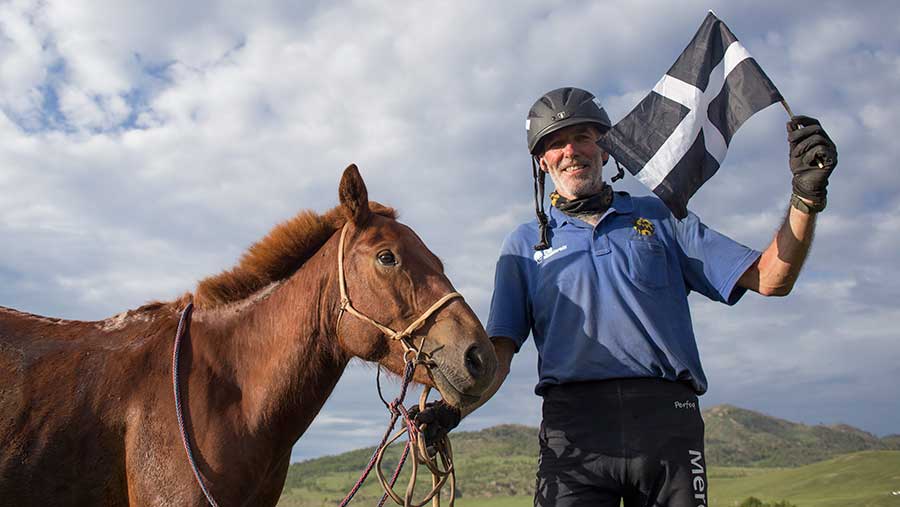 The Mongol Derby is the longest and toughest horse race in the world, spanning 1,000km of Mongolian wilderness.

The unmarked course is a re-creation of the postal system used under Genghis Khan’s empire – attracting only the most elite riders.

And if the sheer distance were not enough of a challenge, those brave enough to take part in it ride on semi-wild horses – changing horse every 40km – using only a basic GPS system to navigate their way over 10 days.

So in an event that comes with the disclaimer “Your chances of being seriously injured or dying as a result of taking part are high” – who would be crazy enough to sign up? Cornish dairy farmer Paul Richards, did.

“I came across the race by accident two years ago while I was looking for a hunting video on YouTube,” he says. “I am not very good at this technology stuff, so I was trying different search terms to find the video and the Mongol Derby kept popping up.”

Though the race grabbed Paul’s attention, he dismissed the concept of entering because of his age. “I am 59 and I remember thinking I would love to have a go if I was younger. I did some research, and saw a lot of previous riders were older than me – so I applied last September.”

Taking part in such an event takes months of preparation from both the riders and the organisers, bringing with it a pretty hefty entry fee of £10,700.

Luckily, half of this was sponsored by Cornish Mutual and potato group Mercian. “As well as trying to fund the entry fees, I also set myself the challenge of raising £10,000 for Children’s Hospice South West,” adds Paul. “I’ve got two children, one grandchild and one on the way – I cannot imagine anything worse than losing a child.”

Paul began training in January this year and sought the help of a personal trainer twice a week, as well as walking and riding at every opportunity.

“In January, I was 96kg and had to get down to 80kg to be able to compete,” he explains. “I completely cut out carbohydrates and, though it was a struggle, I was relieved to weigh in at 78.7kg just before the race. Training also benefited my Type 2 diabetes – I have never been better.”

Paul’s love of horses and riding dates back to his childhood and has remained a strong theme throughout his adult life. “I rode until I was 12 and then started again at 30. I did a sponsored 40 mile ride a few years ago and I love to go hunting, but I had never done any endurance riding before.”

Having trained and prepared for six months, Paul set off for Mongolia on 28 July – spending a week in the country before beginning the race. “The climate is very similar to the UK,” he says. “But in terms of farming, the soil is terrible – I can only explain it as similar to what we would use for cow tracks.”

The week prior to the race was spent in navigation training, preparing kit and getting to know the other competitors – hailing from all over the globe – and the local people.

“I am the only dairy farmer from the UK to have ever competed, and was one of nine from the UK to race this year. The average age of riders was between 30 and 40 – with the youngest being 21 and the oldest 65.

“As well as getting to know the other competitors, a lot of time was spent with local Mongolian people, who are some of the most generous and caring you will come across – they would happily give you their last grain of rice.”

Riders were restricted to just 5kg of kit – meaning only a basic survival kit could be taken for the duration. “I had to leave half the things I brought with me, taking only the bare essentials,” says Paul. “This included rehydration tablets and a head torch as well as a toothbrush, toothpaste and wet wipes, which were my only form of washing over the 12 days.”

After months of training and two days at the base camp, the race finally began on 9 August. “I was so nervous, I could not even eat,” recalls Paul. “I was overwhelmed by all the support I had received from my family and friends in the build-up and I really wanted to do well.”

Riding until 8.30pm that evening, Paul finished the first day in fifth position, however, on day three the race was suspended due to severe conditions. “The weather was absolutely appalling and we weren’t allowed to ride all morning as some riders had got hypothermia,” says Paul. “I was tired and worried I wasn’t going to finish.”

As well as difficult weather, the biggest challenge for Paul was being away from his family for so long. “It was my wife Carol’s birthday while I was away. The cameramen made a deal with me that – providing they could film me, I could have a satellite call to speak to her. It was very emotional.”

To overcome the struggle of being miles from home, Paul found support and encouragement in other riders. “Six other riders and I became known as The Magnificent Seven,” he says. “There was myself, another rider from the UK, two from Australia and three from the USA – we rode together and agreed we were all going to finish together.”

Reaching horse station 13 on day five marked the midway point and a huge milestone for Paul. “While 13 is an unlucky number for some, it was here that I realised I was going to complete the Derby,” he adds. “It went from very wet to very hot and wild dogs and wolves were an issue – but I’d got this far.” 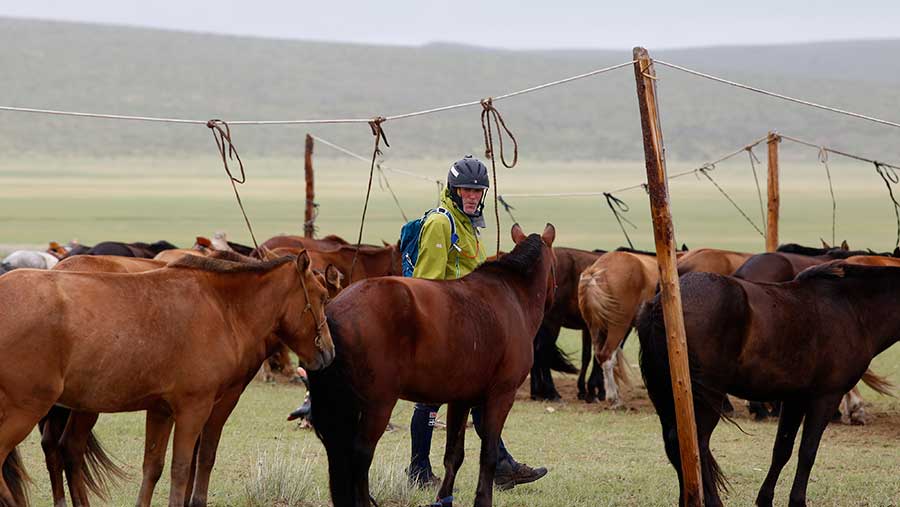 Given that the horses were semi-wild, choosing the right one was key. “At each station, there was a line of fresh horses and it was up to you to pick your own horse. I learnt along the way how to select the best ones: not too fat, strong muscles at the shoulder and one that didn’t flinch when you walked up to it.”

Welfare is a core part of the event – particularly horse welfare – with riders being allowed just four veterinary penalties before being disqualified.

“There is a big respect for horses in Mongolia. From the statues to currency – everything is about horses.

“We had to change horse at every horse station,” explains Paul. “They had to be returned with no visible sores or rubs, and a heart rate of less than 56bpm. The last 6km before the horse station I would slow the horse right down and for the last kilometer I would often just get off and walk on foot with the horse. I jointly won the award for having no vet penalties, which I am very proud of.

As well as riding in a totally new country, Paul also had to embrace the Mongolian culture and adhere to certain traditions. “We stayed in gers every night – which are similar to a yurt,” he explains. “There were rules about which direction you entered the ger and where you put your hat – so I had to remember all that too.

“The food was also very different. Our diets during the race consisted mainly of mutton and noodles with rice, raisins and black tea for breakfast – I didn’t see a green vegetable once.”

On average, Paul rode 114km a day on three horses. However, day eight saw him complete his longest single distance and enabled him to complete the race ahead of schedule.

“I rode 151km in one day on four different horses – the equivalent distance from my farm to Whiddon Down,” he explains. “Out of the 42 that started, 30 finished the race and I finished in 19th place, though that didn’t matter – it was just finishing that counted.”

A thousand kilometers from the starting point, Paul crossed the finishing line at 6.00pm on 14 August – nine days after beginning the race and physically and mentally exhausted.

“The first thing I did was have a cold beer, a Mars bar and a shower,” he says. “After 12 days in the same clothes and no showers, it was the best feeling in the world.”

After a further 26 hours of travelling, Paul finally arrived home to Splattenridden Farm, Cornwall, and in true Cornish style headed straight for a pasty. “I got home at about 10.30pm and all I wanted was one of my mum’s pasties,” he laughs.

So what is next for the man that has completed one of world’s toughest challenges?

“After a couple of days off, it was straight into calving for me. We have a 350-cow autumn calving herd – as well as arable and waste businesses – and calving started on 1 September, so there is plenty going on. However, it has taken me a little while to get back into normal life – I feel emotionally and mentally drained,” he adds.

“While I am glad I took part, I would never do it again. I thought it was going to be tough and it was – a complete rollercoaster of emotions.

“Competing in the Mongol Derby has been a life-changing experience and I am amazed and very thankful for all the support I have received. For anyone thinking about doing it – just go for it. I am going to continue to ride, and look forward to my next challenge.”

Paul set out with the aim of raising £10,000 for the charity Children’s Hospice South West, but has already raised well over this. “I feel very fulfilled and have received a lot of very generous donations – the more money I can raise, the better,” he says. Those who would still like to donate can do so by visiting Paul’s Virgin Money giving page.