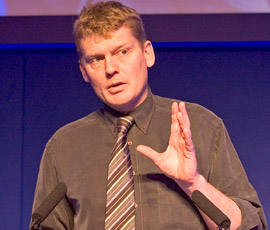 Broadcaster Tom Heap has been promoted to investigative reporter on the BBC’s Countryfile.

Tom will be replacing John Craven who will remain on Countryfile, but has decided to do less in order to “pursue other interests”.

He announced the news at the end of a farming conference that he chaired at Syngenta’s Jealott’s Hill offices in Bracknell, Berkshire.

“From April, I will be taking over from John Craven doing the investigative part of Countryfile, a programme which attracts between six and nine million viewers every Sunday,” he said.

“It reaches a broad range of people – not just the farming and foodies out there.”

Tom already covers agriculture for Countryfile, as well as Radio 4’s Costing the Earth. He is a regular Panorama reporter, specialising on energy and environment.

A BBC spokesman said: “John will remain a core member of the Countryfile team while stepping back from his current role as investigative reporter. Instead, he will be focusing on delivering authored features about the countryside.

“Tom, who has been a member of the team for several years, will be taking over all the investigations.”

Both presenters will continue to work alongside the main presenters Julia Bradbury and Matt Baker with Adam Henson continuing to report on farming, and supported by Ellie Harrison and our team of reporters – Jules Hudson, Katie Knapman and James Wong.”

The spokesman added: “We are delighted Tom will be extending his role on Countryfile. His wealth of experience in rural affairs, science and the environment coupled with his investigative journalism background makes him the ideal choice.”