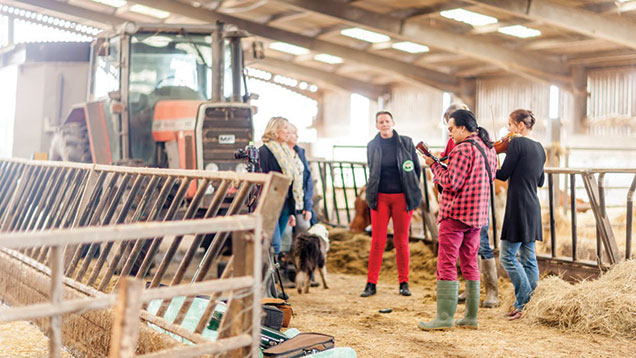 Once they were rat-infested, near-derelict barns in the corner of the farmyard which no one knew what to do with.

Originally built in the early 1800s to dry hops, the kilns had long outlived their original purpose on Briddlesford Lodge Farm near Wootton, Isle of Wight.

But today the two distinctive brick and curved-roofed buildings have a new lease of life as the Briddlesford Hop Kilns Heritage Centre.

See also: Farmers supplying top retailers reveal how they do it

Opened in November last year, it is hosting its third exhibition, The Farmer’s Clock, by island-based artist Joanne Hummel-Newell.

The materials used in the refurbishment – both the steel-framed and Corten angle iron extension and the interiors featuring green oak sleepers and rough-cast concrete – underscore the building’s agricultural history.

In short, it fits into the Griffin family’s diversified but still fully working dairy farm well.

Where once the farm’s diesel tank stood, today floats a colourful paper installation called Hay, which was designed to reflect the farm’s natural rhythm, the yearly cycles governed by nature and the fragile and unpredictable relationship of the farmer with nature.

With even the slightest movement in the air, the grass-like strips appear to be blowing in the wind as they would in the field.

“The life of a farmer is, unlike any other, he is governed by nature, by the moon and by the seasons,” Joanne says.

“These are the themes important to the finished work.”

Each part of the exhibition reflects Joanne’s close observation of – and respect for – the daily life of the farm during her four-month residency.

Piled on the floor around the gallery are Bales – large, multi-coloured, woollen bundles, her homage to the farm’s silage bales.

A stop-frame animation film, The Farmer’s Clock, shows the painstaking wrapping of layers of wool to create the “bales”, reflecting the devotion and constant hardwork required of the farming family: each bale represents a year, each layer a month, each wrap a day.

“On my first few visits to the farm, the dominant thought in my mind was the farming family themselves,” Joanne says.

“There is the ‘wow’ factor when you walk in, something spiritual.”
Judi Griffin

“You sensed a passion and hard work ethos which had the tangible qualities of something passed down through generations.”

The overall effect is “delightful”, says Judi Griffin, the driving force behind the Hop Kilns’ restoration and one of the curators of the Heritage Centre.

“There is the ‘wow’ factor when you walk in, something spiritual.”

These are not the usual agricultural terms of reference and Judi is the first to admit that she has been “dragged out of her comfort zone” in responding to the work of the artists offered a residency on the farm.

“I understood our first artist who was a woodsman,” she says. “But with Joanne I thought: ‘Gosh, I need to get my head around this.’”

A bit of sophistication

While the Griffins wouldn’t claim to be artistic, they find the process of selecting and hosting artists an interesting one.

“It’s great to get a different slant on farming, inject a bit of sophistication,” says Judi’s son Paul, the farm manager.

“We don’t always understand each other – they are artists and we are farmers – but to a certain extent their art does change our perspective and make us appreciate the aesthetics of what we see around us, even the shape of the silage bales.”

But Paul emphasises that it is important that the learning is a two way process.

The gallery was designed to showcase temporary artworks that generate discussion and debate about farming.

But the family maintains a veto on anything that might be controversial.

“We don’t always understand each other – they are artists and we are farmers – but to a certain extent their art does change our perspective and make us appreciate the aesthetics of what we see around us, even the shape of the silage bales.”
Paul Griffin

“We spend a lot of time and effort promoting food and farming,” Paul says firmly.

The artists need to get an insight into the farm and the family to make it relevant,” he adds.

“The successful ones spend a lot of time interacting with us.”

The first artist to exhibit at the Briddlesford Hop Kilns Heritage Centre, Tim Johnson, also immersed himself in the farm.

Embroidered black baler twine mapped out fields and pathways, twilled cane picked up patterns from an old winnowing fan in the Heritage Centre’s collection and ash twigs reference the hedgerows, hurdles and coppicing traditions of the island.

Paul particularly like the hanging made of baler twine: “Is it art or is it craft?” he asks. “I think it’s art because it’s creative.”

It is perhaps no surprise that the family’s favourite exhibit is the film made by photographer Julian Winslow, showing images of the farm set to music played by the Griffin family, with Paul on guitar and his sisters Katherine and Louise playing violin and singing.

Julian stretched and slowed the music to create an atmospheric soundtrack for the Heritage Centre.

As well as a source of artistic inspiration and endeavour, the farm is a hive of commercial activity.

It has a shop and café and hosts many events from school trips to conferences, altogether attracting some 50,000 visitors each year.

But farming remains centre stage. The Griffins have worked the land since 1923 and today’s prize-winning, 140-head dairy herd are all descended from the original 15 Guernseys walked across the downs from Adgestone, near Sandown, to Briddlesford Lodge by Charles Griffin.

And it is very much a family affair.

Judi and her husband Richard, Charles Griffin’s grandson, remain in the main house.

Richard looks after the calves and the farm paperwork, while Judi runs the B&B and grows rhubarb and courgettes for the farm shop, which is managed by daughter, Louise.

Son Paul is the farm manager and his wife Chris runs the Bluebell Café and conference centre.

Their nephew Christy has taken on a farm apprenticeship, while their daughter Lauren designed the bluebell fabric for the café tablecloths and cushions.

“The whole enterprise depends on the dairy,” Judi says.

But with milk prices plummeting, 10 years ago the Griffins converted a former milking shed into a shop selling their milk and a wide range of quality local produce.

Then came the café, in a converted hayloft serving local food, the speciality of the house being rose veal from the male dairy calves.

“As a dairy farm there’s no spare cash. It’s a struggle to pay the bills.”

Cash-strapped or not, they aimed high, from employing award-winning Isle of Wight architect Lincoln Miles to design both Bluebell’s Café and the Heritage Centre, to sourcing high quality produce.

“The shop is known as the local Fortnum & Mason,” Judi laughs.

Turning the hop kilns into an agricultural museum was always an idea in the back of Judi’s mind.

“I used to send my grandchildren in to the barns to find old tools and we’d clean them up at the kitchen table,” she recalls.

But when she started looking for HLS capital works funding three years ago she drew a blank.

Directed by a friend knowledgeable in the arts to the Heritage Lottery Fund (HLF) she struck lucky, as the fund had begun to realise that historic buildings in private ownership needed to be preserved.

The HLF coughed up £95,000 and the Arts Council provided funding for the artists’ residencies.

However the project still needed a large financial commitment from the family.

“We’re not a massive farm. But it was the right decision. Business rates are punitive, but the Heritage Centre enhances the farm and attracts interest.”

She may have injected some artistic sophistication into the farm, but Judi’s role as farmer/curator remains a hands-on one.

She is planning exhibitions for the autumn and into next year just as the farm reaches its peak visitor business.

“I’ve got a lot of work to do on the history of hops and beer making,” she says, hot-footing from helping to clean out the cattle sheds as another school visit arrives.

“And I must remember to untangle the threads of Hay after the children have left.”

The Farmer’s Clock runs at the The Briddlesford Hop Kilns Heritage Centre to 14 September 2015. Open daily 10am to 5pm (free entry).