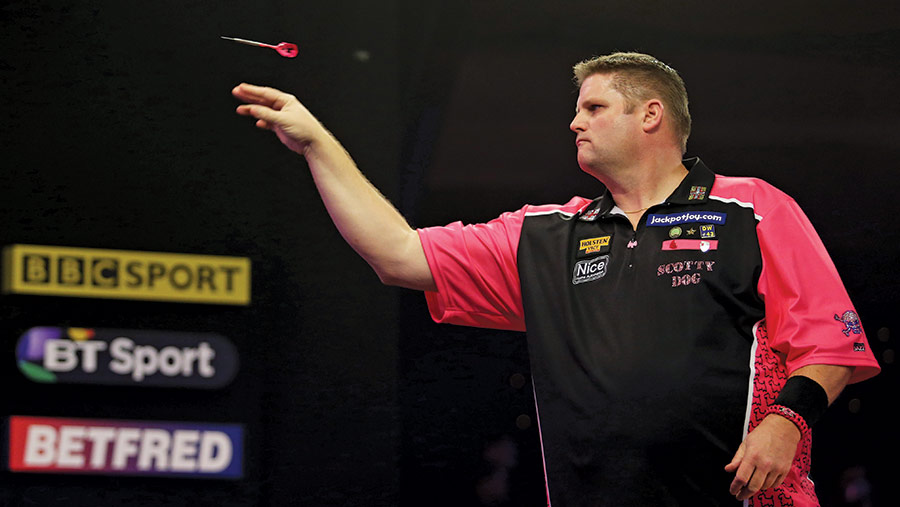 Scott Mitchell, one of the country’s most talented and popular darts players, is as likely to be found on the family farm as he is at the oche.

“Scotty Dog”, as he is known on the circuit, reached the quarter-finals of this year’s British Darts Organisation World Championship last Friday (8 January).

It marked the end of an amazing year as reigning champion, after the 44-year-old Dorset farmer’s son won the title at Lakeside in Surrey in 2015.

Back then, he had just stood on the stage, stunned. “I was thinking like a farmer when I won,” he recalls. “All I could think was: ‘What have I done?’

Scott’s down-to-earth approach set the tone for his championship year. He says his wife Sharon and children Kate and Sam have had to take up the slack on the family’s 30ha beef farm in Ripley, Dorset, while he has been off, as he jokes, “being a superstar”, but in fact his feet have never left the ground.

In-between a hectic schedule of tournaments – not least captaining the winning England men’s team in the World Cup in October – he has travelled the length and breadth of the country, from John o’ Groats to Plymouth, taking the BDO cup to as many clubs and pubs as possible.

He is one of the most popular darts aces ever among aficionados (he was voted BDO Player of the Year in August 2015) and those who wouldn’t know an arrow from an oche.

An estimated four million people watched the 2015 BDO final live on BBC2 and the then-new champion knew exactly how they felt. “I was the fan who became the world champion,” Scott says. “The people who watch make us.”

Life since winning the World Cup

In his “topsy-turvy” year, Scott never forgot his own roots. He spent some of his £100,000 prize money on a new tractor for his dad, Jeff, and the handover was filmed for BBC Countryfile and aired to 9.5 million viewers.

Radio 4’s Farming Today also dropped by the farm to interview the whole family as they tested their cows for TB, but off-camera Scott found time for his day job as a landscape gardener, digging drainage ditches by hand for the parish council, and to help with routine farm jobs.

“Split some logs for Dad. Bought a couple more calves for the farm,” reads his blog from 29 January 2015.

Scott certainly hasn’t forgotten the organisation that got him into playing darts in the first place and taught him many of the skills that enable him to battle match nerves – his local Young Farmers club.

Back in 1986, a fellow member of the Avon Valley Young Farmers persuaded the then 16-year-old Scott to make up the numbers in a local darts team.

Even more importantly, the YFC movement taught him to play to win and gave him the confidence to perform in front of other people, he says. “I was club chairman,” he recalls. “Giving a vote of thanks to a room with 20 people requires the same mindset as playing darts in front of 2,000.”

He sent a video message to the Young Farmers AGM, and took the BDO cup to a local YFC vintage tractor rally in May. He was also made president of Avon Valley YFC. “I was almost prouder than being world champion – even if I am too young to be a president.”

Perhaps most important of all, it was through Avon Valley YFC that Scott met his wife Sharon. Farm and family are at the heart of his world. He has plenty of outside interests: as a young man he was a keen footballer and motocross driver and is now a keen supporter of Bournemouth FC and motorcycle speedway team Poole Pirates.

But family is most important to him and being away so much isn’t always easy. A life of celeb selfies, sitting on the BBC South Today’s sofa, and taking calls from Chris Evans may sound exciting, but “it’s not as glamorous as you think,” he says.

For Scott, it was much more exciting when, last year, the local Piddle Brewery named a beer after him. He was also delighted that the brewers’ grain (the barley residue left after the brewing process) is fed back to the cattle on his farm.

Brought up to take on what was then a 121ha dairy farm, Scott and his brother Ryan were devastated when in 2001, foot-and-mouth struck, cutting off the farm’s lifeline in one fell swoop.

“The cattle markets closed, so we couldn’t sell our calves and we couldn’t afford to keep them,” Scott explains. “Dad had to let me and my brother go. I was shattered. I couldn’t even drive by the farm.”

But the landlord suggested Scott become a gardener, so he began a second career running his own landscape gardening and maintenance company. It allowed him more time for his darts hobby – and now the “hobby” is feeding back into the farm.

“11 January 2015 was a turning point in my family’s life,” Scott says. “Being darts champion has made it easier to make decisions.”

First, there was the tractor purchase and then, when he realised his 17-year-old son Sam had never reared a calf, Scott decided to buy him two from a neighbouring farm. Now they have 30-40 calves, reared alongside a 15-year-old “soppy cow”, the last in the line of his father’s original herd bought in 1958.

The whole family is involved and Sam is following in his father’s footsteps as a member of Avon Valley Young Farmers’ Club – and as a darts player.

“It’s a normal farm, nothing special,” Scott says. “But it is my childhood. Just being all back together, doing what we do a couple of times a year, is magic in my eyes.”

After ending his 2016 BDO run, Scott blogged: “I’m looking forward to getting back to work next week and finding a bit of normality in life again.”

But “normality” might never be quite the same again. Scott is already fully booked for charity functions and exhibition matches until April and in demand as a darts commentator. And then there are those calves to feed…