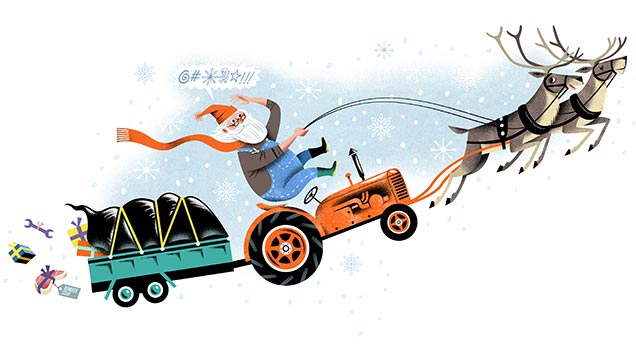 Santa Claus has a lot in common with farmers. He’s resourceful, hard-working and has a long list of jobs to get through. Imagine what would happen, though, if Santa Claus was a farmer…

Farmer Claus is up early. Santa’s always up early (delivering presents to every child in the world is no small task), but this year the man in question has got another job to do first – feed the sheep.

Yes, 2014’s Santa is Gerald and he’s got 400 ewes. It seemed like a good idea back in September, pitching for Christmas work. The livestock job’s going belly-up (often literally as well as metaphorically) and everyone’s always banging on about diversification, so he applied. He figured he had the beard, the paunch and the bobble-hat, so he procured a makeshift red cape (actually a pair of Case-IH overalls) and, bingo, he got the gig.

The first task is loading the sleigh. Uppermost in his mind are all the images he’s seen over the years of badly-loaded, top-heavy, unstable – frankly unsafe – sleighs. So he improvises and initially opts for a 40ft flatbed trailer, all neatly loaded with his telehandler. He’s used to shifting Hesstons so a few pressies are no problem. Aware he’s got to navigate lots of small lanes, he ditches this and goes for Plan B: a smaller tractor and trailer.

He manages to drop one particularly heavy parcel on his foot. Cue the sort of expletives you won’t hear on The Sound of Music or The Wizard of Oz. In fact, Mrs Claus (in this case, her real name is Margaret) heard his utterances from 100 yards away.

Never mind the “must-have” presents, the ones that kids have been lobbying for with pester-power for months. More practical gifts, that’s what Gerald has always preferred. So hard-wearing workgear torches, spanner sets and penknives are what he typically gives out (and that’s just the girls).

He didn’t, it has to be said, employ a huge amount of sophistication when it came to the wrapping. In fact, Sellotape and bows were totally dispensed with, in favour of baler twine. And as for the wrapping paper, well, he figured bale wrap would be close enough.

He’s well aware that Santa traditionally gives coal to the bad children, but that’s off the agenda this year. Coal is far too pricey to give away so he chooses instead surplus items from around the farm such as the calendars that reps gave him and worn-out cultivator tines.

A few gifts got a bit bent and broken in the process of loading the sleigh but, ho-hum, none of the ones that ended up on-board will budge, lashed down as they are with a bit of rope. Then off he goes…

The first problem is the local A-road. It might be December and the middle of the night, but a big tailback of traffic soon builds up behind him. So much for the season of goodwill – one motorist gives him a very un-Christmas-like gesture.

Conscious he’s got a lot to get through, he puts his foot down. Or, rather, he gets the reindeer to put their hooves down, wondering which section of the complicated and impenetrable legislation governing tractors and trailers on the road this particular vehicle would be covered by.

He’s got his trusty sat nav with him (he’s a farmer, he loves sat nav, like he loves all gadgets) and issues instructions to his little elf helpers. His little elf helpers aren’t, in fact, actually little or indeed elves. They’re strapping ag students, desperate for a bit of work in the Christmas break to help pay off their student loans. They helped Farmer Claus at lambing (back then he was just plain Gerald) and were keen to come back. “What will it involve?” they inquired. “Present carting,” they were told.

Obviously he’s got his crawling boards with him. It might be Christmas but he’s had HSE messages drummed into him so knows how to scramble across a roof.

He was pleasantly surprised by the first house-call. He squeezed down the chimney and, once inside, discovered he’d been left a mince pie and a little nip of something alcoholic (naturally, he necks this before informing the students). There were also some carrots (thankfully, British) for the reindeer (which are on loan to him from a local petting farm).

Conscious he’s had a little tipple, he makes one of the elves/students take over the driving and the elf/student decides it would be far quicker, easier and cheaper to take to the air (typical student, always know bloody best!).

Farmer Claus is no stranger to road trips, having delivered straw and calves all across the country. “I don’t mind doing Britain, but I’m not doing the rest of Europe,” he said at the interview. “I don’t approve of Europe.”

The only downside of taking to the air is a near-miss with The Snowman. Farmer Claus, full of whisky, instructs the elves/students to fly straight at the bugger. He’s never liked that Aled Jones.

He knows where he’s got to go. The kids had mostly all written to him beforehand. Sadly, some of the letters that came by email went into his spam folder with all the missives from the RPA. Quite a few kids had also come to see him in-person in his grotto – which was actually the workshop. Trooping in with mum and dad, a procession had explained what they’d like for Christmas and how good they’d been. He sat them on the oily car seat that the fitter typically slumped on when he was having his breakfast and reassured them that of course they’d get what they wanted (quietly thinking to himself: assuming what they want is hard-wearing workgear, torches, spanner sets or penknives).

There are a few mechanical problems with the sleigh at house Number 52, but nothing that he can’t fix with a hammer.

In one yard the sleigh triggers the Halogen lights. In another, it sets off the burglar alarm and the disgruntled owner runs out to see what’s happening. “I’ve been robbed twice this year, I can’t have any old one wander in here with a sleigh,” the disgruntled homeowner says.

Making one delivery, he spots through the bale wrap that it’s a remote-controlled car and decides to have a quick play. What harm can that do? It’s a bit like a test drive of a new tractor. He enjoys it so much it’s one present that he ultimately accidentally forgets to deliver.

More flying, more houses, more snow. He almost gets the sleigh stuck at one point, but he farms wet, heavy land so he’s used to handling machinery in all sorts of conditions. What he can’t avoid is the attention of a collie at one farm and ends up with a nasty nip on the sack.

Not that his own dog is any use in warding off the attention of the offending collie. His has slept non-stop on the sleigh, waking only once to wolf down a box of Roses and the tag that said “To Shirley”.

He’s all done by 9am – even those out-of-the-way houses that the post office won’t deliver to. He heads home, totting up the cash he’s made. Not bad. He’d checked the rates against the old AWB levels before he signed up. Treble time. Even better than the turkey plucking job he’d done one Christmas. He wonders whether he ought to declare it, but figures it’s cash in hand, it’s Christmas…

He gives the reindeer some food (one, he notices, has lost an ear-tag during the journey). They’ve worked well – although admittedly he had them on a high-protein finishing diet in the run-up to the big day, having taken advice from his nutritionist. It gives him the kernel of an idea. Maybe he should keep more, as the deer-meat sector is booming.

He has lunch (and another nip) and weighs up the merits of a reindeer-based diversification. His afternoon is disturbed by a call from an aggrieved parent who had discovered their son doing something unpalatable to a woodlouse with the penknife he’d been given. Typical, Gerald thinks, the customer is never happy. Whether it’s abattoirs or supermarkets, they always find something wrong with what he delivers them.

He fills out his timesheet for the day’s work – and learns there isn’t, in fact, an “e” on the end of Claus. He’d assumed there was because he’s so used to clauses in his grain contracts. He’s disturbed again by the dog vomiting chocolate on the carpet.

He falls asleep in front of the Queen’s speech. He won’t get long – he’s got those sheep to feed.