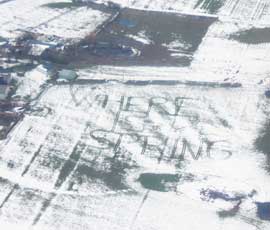 Beef farmer Nick Stokes asked the question puzzling every farmer this week: Where is spring?

The 57-year-old beef farmer, from Ellesmere, Shropshire, sketched the wording on an envelope in his office.

Over the Easter weekend, he jumped on his Massey Ferguson quad bike and spelled out the 40ft letters in the snow-covered field at Haughton Farm.

Then he got in his microlight and soared above his farm to take pictures of the giant letters, which he later sent to his local newspaper, the Shropshire Star.

“I’ve been farming all my life, but this is the latest spring I can recall,” said Mr Stokes, who farms 50 cattle.

“We had 8-9in of snow gather on the fields which has melted and left them very wet. It’s stopping me ploughing and we’ve not been able to sow the spring corn yet.”

The Met Office said this March was the coldest since 1962 with an average UK temperature of 2.5C. Forecasters say the cold spell could last until mid-April.