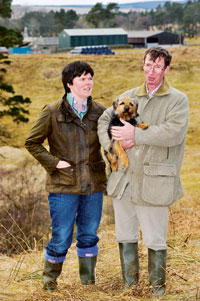 In the last few weeks we have finally emerged from our winter hibernation, and I think it’s done us the world of good.Our first trip out of the house was a concert at the Sage in Gateshead, by folk/rock legend Richard Thompson.

That means that Jake is a fan and I had never heard of him. At the last such concert (Jackson Browne) I found my mind wandered quite a lot, observing the rest of the audience and concluding that we were securely in the bottom quartile in terms of age. This time there was another baby-boomer audience, with lots of grey beards and ponytails and little hats woven by the indigenous peoples of somewhere exotic. But I have to admit it, Jake was right and I was ignorant. This was an excellent concert and we went home happy.

We followed up the Sage trip with a dance at an only slightly less prestigious musical venue in Hexham. After attending several similar events I have decided that the Tynedale Function Suite is a magical place. It casts a spell on musicians who play there. They are bewitched into believing that they are performing at Wembley Stadium and they crank up the volume accordingly.

On this occasion it was the turn of the Bluefaced Leicester Breeders Association to be thrown backwards by the blast. The good news is that if anyone was harbouring any gallstones, these are likely to have been pulverised by sonic waves over the course of the evening.We were there as guests, not members of the society, as we own a grand total of four Leicesters (at the last count). I checked with Jake on the breed characteristics before we went out, and he advised that they have two:

a) a Roman nose; and
b) they are prone to sudden death

On the basis of their social events, I would say that the Blackface breeders tend to be more excitable types. Jake says this is probably because the Leicester people need to have infinite patience to keep their sheep alive. This is quite an interesting theory. If true, it would imply that the “easy care” Swaledale breeders must be the most excitable of the lot.On our table, prior to the music obviously, there was much discussion of the president’s tie. It was the official society one – plain blue with the head of a Bluefaced Leicester in the middle. Someone commented that it was good because if you spilt gravy on it, it made it look like a crossing Leicester tup (I gather that’s very satirical in mule breeding circles).

I am more familiar with Jake’s Blackface Society tie – green with purple stripes – evoking hill and heather. It could have been quite nice but it seems to have been made of towelling, which is handy for mopping up spillages, I suppose. Jake says that his tie is an old-fashioned one and that the newer version is a lot more slick. How often that is true.On the subject of things magical, there has been a lot of fuss in the local press about selling off Forestry Commission assets, including the big one on our doorstep, Kielder Forest, described by our local MP as “enchanting”.

At the risk of seeming out of touch, I must say that I see no reason to be sentimental about Kielder Forest.Kielder is the largest man-made forest in Europe. It did not originate in the mists of ancient times, but was planted in the 1920s and 1930s. Furthermore, I will admit to having a deep-seated loathing of it. This dates back to my childhood, in the days when we would sometimes go out for a “Sunday run” in the car after lunch. Thinking back, my father rarely came on these outings. I think they may just have been a way of getting an aged relative out of the house.

On one of these trips we went to Kielder. It was one of the dullest afternoons in my life, and I say this as someone who spent four years as an auditor. I recall enduring a long journey on twisty roads, a quick view of the reservoir and then the forest drive through the trees. This comprised 13 miles of bumpy road, at a maximum speed of 20mph, where all you could see was row after row of Sitka Spruce. Beyond the first couple of rows, it was all dark. You literally could not see the forest for the trees. It’s a commercial forest – what would you expect?Oh yes, and the wildlife. I remember we stopped and went for a walk, only to be engulfed by swarms of blood sucking midges. This was the only wildlife we encountered.

So, do I find Kielder Forest enchanting? Only in a Brothers Grimm kind of way. DEFRA will no doubt be reassured to know that they have my complete support in disposing of Kielder Forest – at the right price, of course. As for my MP, and his rather bizarre description of Kielder as the “green lungs of the North East”, I can only advise, pet, you ought to get out more.