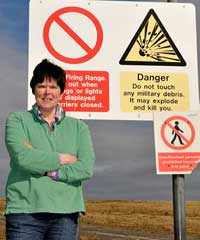 It is high summer and everyone (except us) is on holiday.

The army had a major exercise on Otterburn ranges for most of June and July – helicopters, heavy artillery, the lot – through until 2am most nights. Since then activity has been a lot less high-tech – in fact, the RAF marched past me as I was feeding Colin the calf the other night. Given the impending spending review this could be the shape of things to come.

Northumberland is full of visitors or, as Jake described them, “a lot of people milling about in Alnwick”. You can also spot the change in the clientèle at Wallington Farm Shop where I often go to buy meat.

Wallington is a National Trust country house and gardens, and the farm shop sells a lot of locally sourced food, including lamb and beef from the estate farms.

During the winter, Wallington seems to attract a lot of people of a certain age from Tyneside, kitted out in the latest waterproof hiking gear, with boots, walking poles and rucksacks (no doubt full of energy bars and Kendal Mint Cake).

I have often thought this marginally over the top for a stroll round the lawns and the formal gardens. Are they really meeting at some secret pensioners’ crack den in the woods? Probably not.

Now it’s the tourist season Wallington is full of people wandering around determinedly wearing cargo shorts, even though it is drizzling and you can see the mud oozing through the holes in their Crocs.

Jake doesn’t really do holidays. When we came back from our honeymoon he announced that he wouldn’t be flying again. That was 17 years ago and he hasn’t been on an aeroplane since.

In terms of leisure activities, the first half of our summer has been dominated by cricket. Archie plays for Alnmouth & Lesbury Under 11s and Northumberland Under 10s (yes, such a squad exists).

This has involved Friday night practices from April and various league and tournament matches since. The Friday night sessions are very sociable for the parents and a very pleasant way to wind down at the end of the week. Particularly if you sit in the clubhouse away from the high pitched shrieking of some of the players, mainly our son.

Jake has become an enthusiastic junior cricket follower, which is just as well as he has had to go to matches all over the north. This recently climaxed in a period of three days in which Archie kept wicket for 96 overs – quite a lot for a 10-year-old.

Both Jake and Archie are now suffering cricket withdrawal symptoms. However, they are now looking forward to an end-of-season “Fathers v Sons” match at Alnmouth. I just hope that they control the sledging and that nobody gets hurt.

Back on the farm, we’ve had a couple of traumatic events recently. First, a fox killed two of Archie’s hens. Leaving aside the unwarranted-violence-against-innocent-creatures angle, this was particularly upsetting as :

a) Henrietta and Dyno-hen were Archie’s favourites;

b) they represented 40% of his flock; and

c) they represented 50% of the productive flock.

We worked out a while ago that one of the flock was a non-layer, we just didn’t know which one it was. Suffice to say the non-layer has survived. The remaining hens are now only producing one egg a day and are confined to barracks.

A further blow last week was the sudden death of Jake’s second-string sheepdog, Tweet. He was running through some bracken and suddenly collapsed. By the time Jake got to him he was already dead. He seems to have had a heart attack.

Tweet came from a friend in the Borders as an under-employed sheepdog of indeterminate age. The fee was a bottle of whisky a year for his lifetime.

To be honest, he was one of the worst-performing sheepdogs I have ever witnessed. He seemed to have a problem distinguishing between left and right and he frequently seemed to just run round in circles. However, on the plus side, he was willing and good-natured and in Jake’s words, “he blocked a hole”.

The demise of Tweet has left the dog team a bit light, so Jake has had to start giving Sam, the young dog, some intensive training sessions in the paddock. The shouting coming from that field seems to be reducing each day, which I think is a good sign. Of course, it could just be that Jake is losing his voice.

Our next major task on the farm is hay-making, so could I just appeal for the return of the hot weather we seem to have lost following my previous column? When that’s done we can finally go on holiday like everyone else.