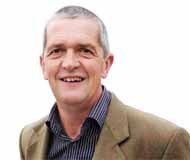 My farming career has given me a number of regrets, but destroying jobs is probably the foremost.

What I am truly ashamed of is that in the past I have even boasted about this as if it was something to be proud of.

When my grandfather died in the 1950s, my father was employing some 30 blokes on 800 acres. By the time Dad passed away a few years back, I had managed to get it down to two employees on 1,400 acres.

Throughout the ’80s and ’90s I had revelled in stretching fewer men over more acres. I thought I was lean and mean, but on reflection I was probably just mean. As for lean, my condition would be better described as anorexic. While I took a selfish satisfaction in improving labour to productivity ratios, I never stopped to ask myself what my contribution was to wider society. Where my grandfather was a cornerstone of the local village economy, my impact was more akin to the Black Death.

As for those large IACS and SPS cheques the taxpayer was generous enough to fund and send to me once a year, for some bizarre reason I thought it was much better to throw this easy money in the direction of other landowners to induce them into letting me farm more of their acres. It didn’t occur to me to use the money to create more jobs on the acres I already had. While I got a buzz from taking on more land, I could see no satisfaction from taking on more employees.

Although it would be quite wrong of me to try to share the blame, it could be pointed out that there were other farmers prepared to compete with me in this game of employing the least while offering the most for share farming arrangements.

As a result of this race to minimise rural employment, landowners got more and local workers got less. To put it another way, the rich got richer and the poor got poorer. Like some perverse Robin Hood, I was happy to take money from taxpayers on average earnings and hand wads of it over to the landed classes. And just to put the cherry on this hypocrisy cake, I could even be found on public platforms urging young people to consider a career in agriculture.

The bit I was cruel enough not to tell them was that when they had finished the agricultural college course that I had encouraged them to take, I had no intention of giving any of them a job at the end of it. With my moral compass completely out of kilter, I came up with false excuses to the effect that these young people were unemployable because they are lazy and feckless. Never did I think to make such sweeping haughty accusations at the landowners I was throwing public money at.

Now before you think I’ve suffered some guilt-induced conversion to become farming’s answer to Arthur Scargill, let me assure you I’m probably no more left wing than the average Farmers Weekly reader.

I can see a need for our industry to be efficient and to be mechanised. There is no going back to the gangs of blokes armed with hoes, pitchforks or scythes, and it would be stupid to suggest such. But as UK unemployment levels approach record levels, particularly among the youth, I have resolved that never again will I treat the idea of creating full-time jobs as some sort of vice. It’s not, it’s a virtue and let’s not forget that.

What do you think employment rates on farms? Have your say on our website forums.