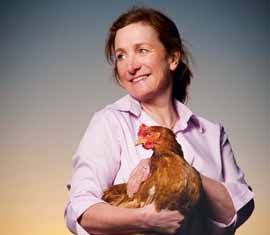 Free-range. Home-made. Happiness. These are the three terms that, according to Sally Jackson, encapsulate the approach at the Pink Pig Farm in Lincolnshire.

The Holme business, with its 325ha (800 acres) producing pigs, eggs and veg, has a farm shop, café-cum-restaurant and adventure trail.

At the heart of the enterprise are Sally and Andrew Jackson. “He grows it and I sell it,” is how responsibilities are divided, according to Sally, who’s just been named the Face of British Food Fortnight 2011.

The competition, run by Farmers Weekly and British Food Fortnight, was looking for someone who is a great ambassador for food and farming – and whose face embodies the traits the public associate with the great British countryside – to act as the face of the nationwide initiative. (See who made the shortlist).Entries flooded in for this coveted competition before the seven-strong shortlist was passed to our celebrity judge, rural romp writer Jilly Cooper, to pick the winner.

Sally’s sister, Julia, nominated her – highlighting the great educational work she does with youngsters and how hard the mum-of-three had always worked to promote local and British food.

More than half of what is sold at the Pink Pig is grown or made at the site, alongside other high-quality products from 30-plus local producers.

“The business started with a trestle table at the end of the drive in 1999,” explains Sally. “We then moved into a shed when it got cold and, in November 2001, opened a small shop and little café. In 2005 we expanded again, adding a farm attraction outside for kids.

Sally and the Pink Pig team are no strangers to prizes, having won much recognition for all their efforts.

One highlight, she says, was winning FARMA’s Farm Shop of the Year in 2006 – particularly special, she says, because it was “an accolade from my peers”.

“It really felt like all the hard work was paying dividends. We were trying to make farm shops real – not just supermarkets in the countryside.” The couple also netted top place in the “diversification” category of the 2005 Farmers Weekly Awards.

The public’s interest in food has changed hugely since the early days of the Pink Pig company.

“When we started thinking about local food, people thought we were mad, but in 10 years the situation’s changed so much,” says Sally.

“It’s gone from the public generally not caring or knowing about their food to a situation where now more than 40% of population care about where their food comes from – including a lot of young people. It’s hugely encouraging.

“When we started school visits, kids didn’t know carrots were whole and came out of the ground. They thought they came from Iceland and grew sliced.”

One of the highlights in the Pink Pig’s calendar is the two-day North Lincolnshire Food Festival, one day of which is specifically aimed at kids. Now in its eighth year, it takes place on 30 September and 1 October this year and will again see hundreds of kids visit for an unforgettable learning experience.

“It’s at the heart of what we believe in – education, good food and children,” says Sally. “When you’re educating children, you’re also educating adults – even though the adults don’t always know.”

“In Sally, we have found someone who epitomises everything that British Food Fortnight is about. She produces the most fabulous quality distinctive food that reflects the beautiful part of the country it comes from. The work she does with children also makes her a great ambassador for our school programme.”

Back at the Pink Pig Farm, meanwhile, Sally says she’s over the moon and very surprised at winning this accolade.

She also has a little bit of an admission. “I love eating – but I hate cooking,” she says.

Jilly Cooper loved them all…

Here’s what our celebrity judge, Jilly Cooper, had to say about all the shortlisted candidates and why she picked Sally as the winner:

“They are a marvellous bunch of people. I loved vegetable farmer Alastair Wilson – he is obviously a really good person; and I do wish Chris Padget terrific luck – it is wonderful that he has swapped his life in the office to become a dairy and beef farmer, such a brave thing to do.

I have always been upset by battery farming so I congratulate John Franklin on looking after free-range poultry, cattle and pigs, and the very best of luck to him. Valerie Wood-Gaiger looks absolutely charming and I love to see us pensioners getting together to help the countryside.

Suzanne Craig obviously has farming in her blood and must be a great help to the local community as well as working on her husband’s farm. And I loved Jane Tomlinson and her pigs, she seems to get an awful lot done – lucky Lincolnshire. It is good she is writing in magazines and appearing on local radio.

Finally, I have to say that I fell in love with Sally Jackson – she has such a lovely warm face and I was so impressed by her Pink Pig farm. It is fantastically important that she invites 1500 school children to her farm because it is so important for them to realise the wonders and importance of the countryside and farming. Also it is wonderful that she helps 30 local producers and has won all these awards. So, after a lot of heart-searching, worry and fretting (I would like to give first prize to all of them), I decided to give it to Sally Jackson. I do wish her the best of luck.”