Growing up on a smallholding and helping on farms since the age of eight instilled a passion for agriculture in Jamie Feilden and a desire to become a farm vet.

However, later in life, he decided to study history at Edinburgh University and after graduating, started teaching with the charity, TeachFirst. 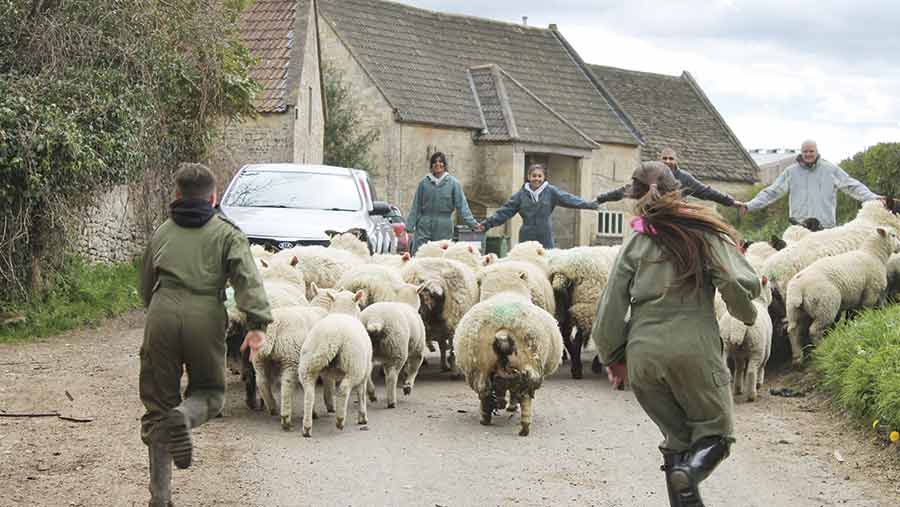 That job took Jamie to Croydon in south-east London for the working week, but he still returned home to Wiltshire every weekend to help out on family friends’ farms.

He started seeing the huge gap between the two worlds and got thinking about how an overlap could bring benefit to both sides.

“My mum always said that if I hadn’t been shifting hay, chopping logs, working with animals, that I would have been on Ritalin to control my hyperactivity,” says Jamie. “And I started thinking about the benefit helping on a farm could bring to some of the children I was teaching.”

A decade on from the first visit of seven children to Jamie’s mum’s home, the charity of which Jamie is chief executive, Jamie’s Farm, now has two farms, one in Wiltshire and one in Hereford. Across the two sites, 1,000 children visit each year.

The children, aged between 11 and 16, are at risk of social and academic exclusion – for example, they might be young people in care or students who are showing signs of difficult behaviour and not engaging with teachers.

The focus is not necessarily on direct education about farming, but the programme, based on the charity’s farms and other sheep and dairy farms, is all around food, gardening, stockmanship and practical work, so the children indirectly learn a lot about agriculture. 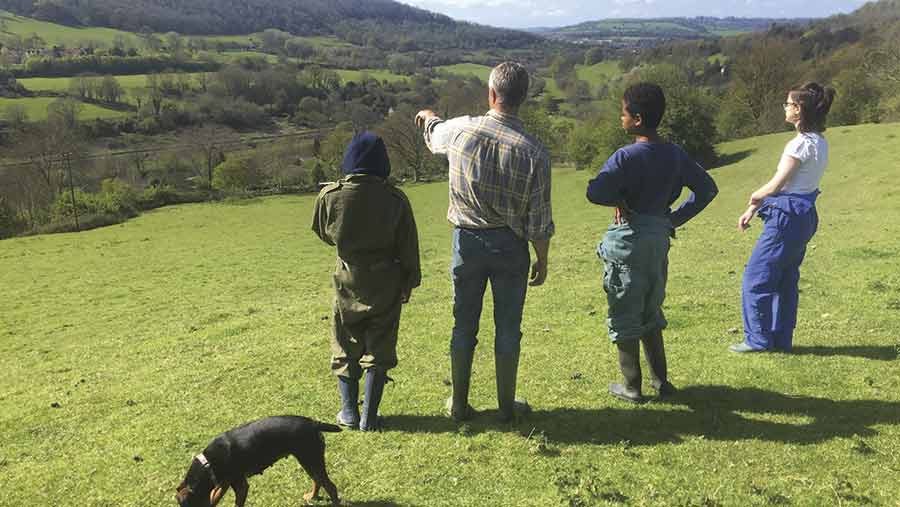 Jamie says that a lot of children leave interested in a career in farming, food or butchery. The overall focus of the activity programme though is on hard work, interaction and changing bad habits.

“There are several reasons farming works so well for the children,” Jamie says. “Firstly, they have to think about something else before themselves – the animals are fed first in the morning, before they have breakfast, they witness new life which is very exciting, it’s hard work and they get up close and personal with where their food comes from”.

Each visit lasts five days and there will be around 10-12 children, with three to four members of staff from the school or council and six staff from Jamie’s farm, who are involved with each visit.

The principles of the charity are based on three areas:

While the charity is in the process of finding a third site and may be looking for others in the coming years, they never plan to expand at the cost of their culture and ethos. Jamie knows the factors that are important to the effectiveness of the programme.

At the Wiltshire farm, the kids and accompanying adults sleep in a barn conversion on the farm or in individually decorated bedrooms in the other half of Jamie’s house. “We’ve had kids, when they arrive, look around and say ‘Home Sweet Home!’”

That is why the third farm must be within an hour-and-a-half of Jamie’s base in Box, Wiltshire, so that he can regularly visit the new site and they will all stay close-knit.

The two farms are working farms, operating commercially, so that too is a consideration for the new site. “We do not want to be a petting zoo. We want to farm well, with good stock,” says Jamie, who has plenty of farm work experience, particularly working on local beef and sheep farmer Steve Carnie’s farm when he was younger.

In fact, he was one of Farmers Weekly’s youngest subscribers: “When I was five I had my own subscription and I used to go to the post office every week to pick up my Farmers Weekly.”

One of the biggest challenges Jamie faces right now, like any farmer, is the low farmgate prices. The farm, as well as letting the children’s accommodation, are important income streams for Jamie’s Farm.

The charity farms 160 acres in Wiltshire (60 owned, 100 rented) and 105 acres in Hereford (all owned) and Jamie, with the two farm managers, is focusing on technology and quality breeding stock to try and maximi

They are breeding pedigree Angus and Hereford cattle, in Wiltshire and Hereford respectively, and have a small pedigree Texel flock in addition to their main flock. They supply local butchers with pig and sheepmeat, sell lambs to ABP and M&S, sell bulls to local farmers and store cattle through Hereford and Frome auction markets. 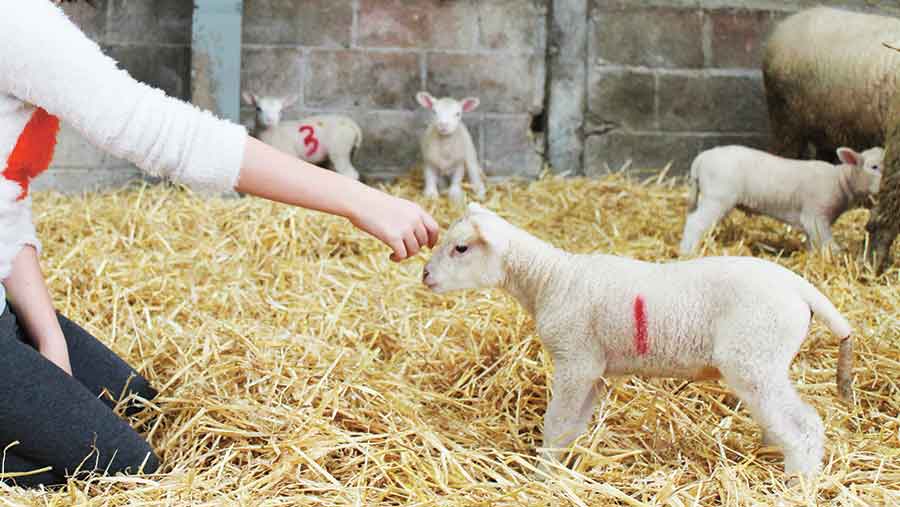 They have also just bought some 10-month-old pedigree Lowline cattle, a beef breed 60% of the frame size of the modern Angus, to see if they could be a profitable breed for the farm.

More recently, Jamie and his team have been using EBVs to select breeding stock and they are seeing easier births and more vigour in the youngstock from their more recent bulls and rams.

As all food and bedding is bought in, efficiency is increasingly important and so they have been investing in equipment and technology to make more use of data. They have invested in weighscales and use FarmPlan software to monitor stock’s progress.

To anyone considering an open farm or hosting a school visit, Jamie would say “Don’t be daunted”.

“The health and safety is not as bad as people think it would be. And think about the value that it brings other people, it is hugely important for people to understand farming and see where their food comes from. Plus, as farmers, living and working in a beautiful place, I feel that we have an obligation to share that beauty.”

Children stay at the farm from Monday to Friday. Jamie says that it is very important that the team talk about when the kids return home, or to school, from the very offset, otherwise some of the kids get so absorbed in farm life that they don’t want to leave. “It is important that they don’t leave feeling upset and pining to come back here; instead we want them to go back and use their experience positively.”

Children rise at 8am each day and half of the children feed the animals while the others cook breakfast. After a hearty breakfast, they split into small groups of two or three and take part in tasks like horsework, gardening, artwork, carpentry, lambing.

Every morning after breakfast, the children will take part in check-ins and shout-outs. “The check in is a score out of 10 based on how they are feeling. They might say 5/10 because they slept badly, or they might say 10/10 because it was the first time they went in the pig pen and they’re feeling good,” says Jamie. “Shout-outs are celebrating each other – so they praise someone else in the group for an achievement they have made. We want to get them used to opening up, sharing feelings and supporting each other.”

All of the heating and hot water at both farms is fuelled by biomass boilers, so the children have to chop the logs in the day to keep it going.

And every day involves a long walk, at least three to six miles, so there’s plenty of fresh air involved. “Sometimes they watch a film,” says Jamie, “but not often, and never television”.

The night before they leave the farm is “Celebration night” where the Jamie’s Farm staff compliment and praise the kids on their achievements made throughout the week and all children leave with a certificate showing their accomplishments and on it is a photo of them in their favourite place on the farm, or with their favourite animal.

If you know of a farm within an hour and a half for sale, or a farm where the landowner would consider a tenancy/farming arrangement with Jamie’s Farm, please contact them. You can find all their details at www.jamiesfarm.org.uk