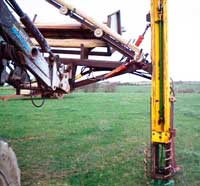 Our inventions competition attracted more than 50 entries this year. Here are the category winners, runners-up and commended entries. Winners receive a cheque for £400 and runners-up and highly commendeds get £100. The overall winner also wins a free trip to the Agritechnica machinery show in Germany in November. 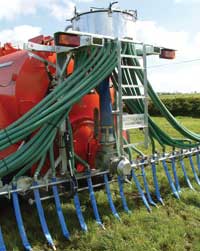 As NVZ regulations become stricter, farmers are being forced to come up with increasingly ingenious ways to keep up. When Albert O’Neill, a dairy farmer from County Tyrone, bought a new slurry tanker with trailing shoe brackets, he decided to design his own dribble bar.

A Simba disc fitted with a screw to alter flow rate is used to deflect slurry through a system of pipes to a series of drop hoses. Five hydraulic pinch bars along the boom act as a shut-off for headlands and transport and the boom can operate over any bout width.

At the end of each hose, there’s a steel weight to maintain pressure and, unlike a trailing shoe design, it can spread even in reverse. Nor does the boom have to be raised when turning. 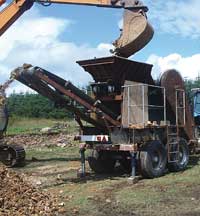 Rock crushers are normally heavy, immobile things with integral engines that have to be carted around on a transporter. But Turriff, Aberdeenshire farmer-contractor Bob Knowles has produced a machine that can be easily taken from farm to farm behind a tractor.

He mounted it on a chassis and devised a system for powering it from the tractor via a split-drive gearbox. One drive goes to power the crusher works, while the other runs the hydraulic pump that powers the reciprocating hopper and discharge elevator.

He is now able to offer farmers a machine that can crunch down rock and stone from heaps around the farm (or from demolished farm buildings) and turn it into hardcore. 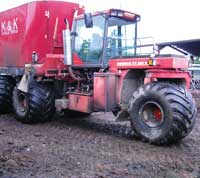 Doncaster farmer-contractor Michael Hill put together this self-propelled feeder to keep the farm’s 800 cattle supplied with feed. He bought a second-hand 50kph Horsch TT351 power unit with muckspreader, took off the latter and replaced it with a 12t K&K vertical feeder.

With the cattle spread over two farms four miles apart, he can quickly get from one place to another. In fact, two-and-a-bit loads are enough to feed all the cattle, he says. All the conversion work was done in-house and he also had to fit an unloading auger. 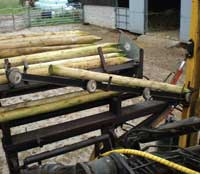 Putting in fence posts and attaching the wire to them is normally a slow, two-man job. But Truro farmer David Carbis came up with this ingenious one-man-operated post driver and stake-loading and clamping system. A batch of 30-40 wooden stakes is carried on the front of the tractor. Individual stakes are fed on to the post driver, with a hydraulic cage clamping them tightly before they are driven into the ground. At the same time, an automatic self-tensioning wire netting dispenser unrolls the netting as you insert the posts. 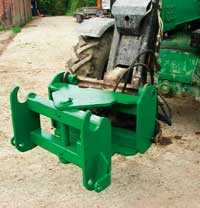 Regardless of how skilled you are with a telehandler, sometimes things are always at the wrong angle. So Powys farmer Nicholas Evans designed an attachment that fits between the headstock and the attachment and uses one double-acting ram as an extra swivelling mechanism.

One hydraulic service is needed to power the ram and it is now possible to move any attachment through 60° without moving the machine itself. 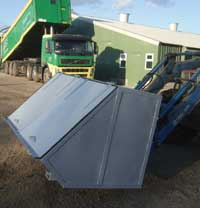 Dealing with and transporting fallen stock usually involves manhandling the carcass into a loader bucket or the back of the pick-up, but Matty Donald from Northallerton, North Yorkshire, has designed something that means it has to be handled only once.

His unit consists of a steel container with two half-lids, each of which opens automatically when it is tipped. The lockable box – coated with epoxy resin to protect it from corrosion – goes on the front of a set of pallet forks and is held by three chains for tipping. 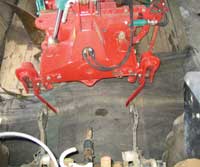 North Yorkshire farm student Andrew Gaught’s link arm guides avoid wasting valuable time shunting backwards and forwards when hitching up to an implement. The two guide plates intercept the link arms, lining them up precisely under the balls. Now all heavy equipment on the farm where he works is fitted with these simple additions.

Tractors are difficult places for anyone with mobility problems to get in and out of. Cornish farmer Ian Northcott found an answer by replacing the often-awkward tractor steps with a hydraulic lift.

The vertical ram is powered by a separate 12V hydraulic pump, allowing the platform to be lowered flush to the ground so the operator can step onto it. Then it’s just a push of a button to raise the step to a convenient height to get into the cab.

A safety latch prevents the platform from dropping during operation and the lift can easily be removed and the original steps put back. 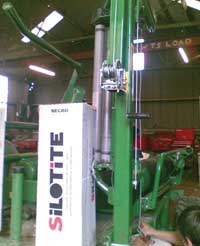 How many times have you struggled at the end of a long day’s silaging to hoist a 25kg roll of silage wrap onto the wrapper? For shorter or more slightly-built operators, it can be decidedly difficult.

So Devon farmers Ed and Mary Vigers (Mary loads the rolls) designed a crane arm that fixes to the top of the storage post that holds the wrap. It lifts the roll and makes it a doddle to put it onto the wrapper.