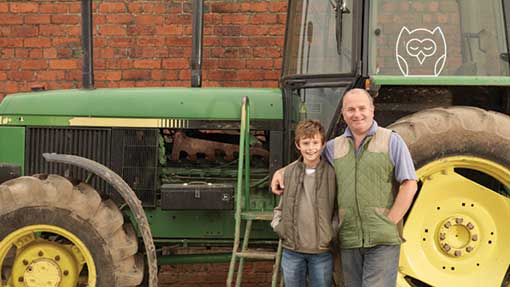 Rural insurer NFU Mutual has launched a farm safety campaign to try to reduce the toll of death and serious injury in agriculture.

The Yellow Wellies campaign will be led by an image of yellow wellies and will be asking farmers the question “Who will fill your boots?” in the event of an accident or death.

While farming accounts for just over 1.5% of the UK workforce, farmers account for 15-20% of all workplace fatalities.

NFU Mutual said rising concern over the continuing high level of fatal and life-changing injuries on farms had also prompted it to set up a charitable foundation to help farmers work safely.

The insurer’s board has pledged to provide financial support for the newly-formed Farm Safety Foundation, including a £250,000 donation for the first year (2014) – and significant amounts of funding over the next four years.

The foundation will work closely with farmers, the NFU and a range of farming organisations to help reduce the toll of fatal and serious injury accidents which, regrettably, have made farming the most dangerous occupation in the UK.

Over the coming years, the foundation will be conducting research, mounting safety awareness campaigns and providing practical advice and training for farmers and their workers. The Yellow Wellies campaign will be synonymous with the foundation’s aims.

The foundation will also be working closely with the Farm Safety Partnership of England, Wales and Northern Ireland.

NFU Mutual hopes to help the industry see a noticeable reduction in accidents and deaths over the five-year period of the campaign – but it accepts that changing behaviour “can take time”.

Rob Jones, NFU Mutual’s corporate social responsibility manager and a trustee of the foundation, said: “The foundation aims to establish itself as a leading authority on farm safety, raising awareness in the farming and agricultural community of the seriousness of farm accidents and the devastating impact they can have on families and businesses.

“It is hoped that over time other funds will supplement this initial amount of capital, and that associated organisations, as well as people who live and work in the countryside who want to get involved, can get behind the campaign and donate even more money to ensure we can make the biggest difference possible.

“The construction industry has been very successful in minimising the number of accidents in their sector and it would be great to see a noticeable and clear reduction in farming accidents and deaths over the five-year period of this campaign.”

NFU Mutual is asking people who live and work in the countryside and who wish to find out more about the campaign, and how they can get involved, to contact them at: pressoffice@nfumutual.co.uk.