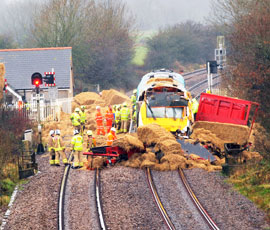 A farm worker has been arrested on suspicion of endangering safety after his lorry load of hay was hit by a train.

Seven rail commuters were injured in the collision which took place at Henllan Amgoed, Whitland, Carmarthenshire, on Monday morning (19 December).

The 48-year-old lorry driver from Llanboidy was arrested later on Monday by British Transport Police officers who were leading the investigation.

A police spokesman said that the hay lorry was towing a trailer and was stationary when it was struck. But he was unable to confirm local reports that the barrier had dropped in front of the truck while it was negotiating the crossing.

The Arriva Trains Wales service was carrying 60 passengers from Milford Haven to Manchester. All of the injuries were minor but five casualties needed hospital treatment.

The train driver’s cab was severely damaged in the collision and eye witnesses said that he had been lucky to escape death or serious injury.

See the dramatic pictures of the accident below