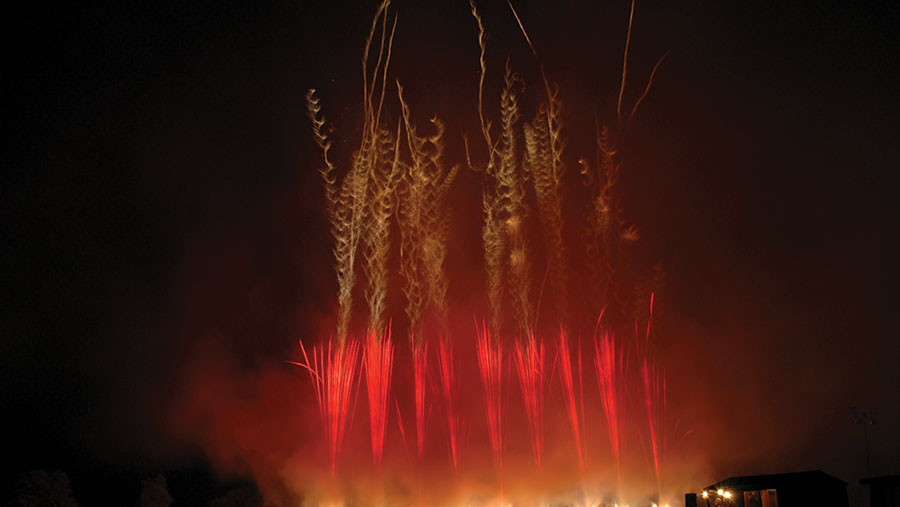 Martin Sewell first became involved in the fireworks industry when he was a venture scout helping to marshal a local town display.

Over the years his interest grew and he started helping put in stakes, run cables and then later choreograph the event.

Following the atrocities of 9/11, it looked as if the long-running event in Hemingford, Cambridgeshire, would cease when the insurance premium rose from a few hundred pounds to more than £5,000.

“It seemed such a shame,” says Martin, who farms 300ha of wheat, barley, oats and peas, as well as keeping 150 British Blonde cows on his family farm near St Ives.

“So I sat down with engineer Tony Hobbs, who I had been helping with the organisation, and we discussed the possibility of going into it commercially, if only to get enough to pay the insurance premium.

“We decided to go for it and 18 months later formed Cambridge Fireworks, with Mark Wadsworth.

“For a year or two we did four or five displays, just enough to cover the insurance, but in the past couple of years we have been a bit more proactive about putting ourselves out there.”

They now organise about 15 displays a year (all pre-planned, assembled off-site and electrically ignited, which gives better placement and timing), including engagements and product launches. They have even provided a display at a funeral.

The firm is choreographing seven Bonfire Night events this year, including one in north London, while their work has also taken them across East Anglia and into Nottinghamshire.They also specialise in lancework – the art of depicting names, logos or initials in fireworks.

“The business fits in very well alongside my farming work, apart from a very small window in the middle of the year,” says Martin.

“Fireworks at weddings tend to be in the autumn or spring, as in the summer months it gets dark too late. We have done some in the summer, but really that is when our work tends to go quiet, which suits me.

“Obviously we have contractors and other guys we can call on to help us at the bigger events, but we tend to do the weddings ourselves.

“Initially, I suppose I loved it because it wasn’t something that ordinary members of the public could get their hands on,” he admits.

“But now it is the challenge it presents. Every year there is a challenge to present something new – a different effect, or something people have not seen before. It is the creative side I like.

I don’t draw, I don’t have a musical bone in my body; I have an engineering background.

“Fireworks are all about timing. Taking your raw product and timing it into the sky to get the right effect. wWth my background in mathematics and engineering, that fits.”

As well as employing the engineering skills he uses in his agricultural work, farming has also taught Martin about another element he has to contend with.

“In both farming and fireworks, you have to deal with the weather – whatever it throws at us,” he says.

“And in that sense, fireworks are very similar – unless it’s physically dangerous, like blowing a force-nine gale, which means the wind could take a rocket the wrong way, you just have to deal with it.

“We have come home looking like drowned rats on more than one occasion. One display four or five years ago sticks in my mind – it was horrendous. But ultimately, people have come to see a public display – in that instance you can either go on, or refund them. Weddings also can’t be moved.”

Martin Sewell and his team setting up a fireworks display.

In terms of providing the pyrotechnics for a couple’s big days, he has learned that most people want either five-, eight- or 10-minute displays. So they designed four packages. The eight-minute display costs about £1,000; it takes about an hour-and-a-half to fuse together and a couple of hours to set up.

“I enjoy the work, it is challenging – and it’s certainly a change from the day job.”