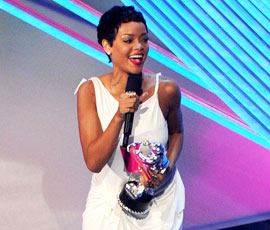 A farmer who stopped Rihanna filming a raunchy scene on his farm for her single We Found Love has congratulated the singer after the video scooped a top award.

Rihanna won MTV’s Video of the Year award for We Found Love, which was partially filmed on Alan Graham’s farm last year, in Bangor, County Down.

The video features shots of the singer running half naked through his field of wheat at Coach Hill Farm, before he stopped the filming on moral grounds.

Rihanna was shooting the scene topless when Mr Graham famously interrupted her, telling her it was “inappropriate”.

The pop star shook hands with Mr Graham after he stopped the filming, before they parted on good terms.

According to Mr Graham, she spoke highly of him afterwards, saying: “He was great”.

However, contrary to reports in national newspapers at the time, Mr Graham maintains that he did not asked Rihanna to cover up, or to “find God”.

Mr Graham said he did not hold any grudge against Rihanna and sincerely congratulated her on her latest award.

“I’m 62 years old, pop music is not really my thing, but she was very mannerly, I respect her, and almost care for her,” he added.

“I had reservations – and still do – about women being used as a commodity. She took her top completely off and at that point I found it completely inappropriate and asked her to stop.

“I could see no bikini top as people alleged she was wearing.”