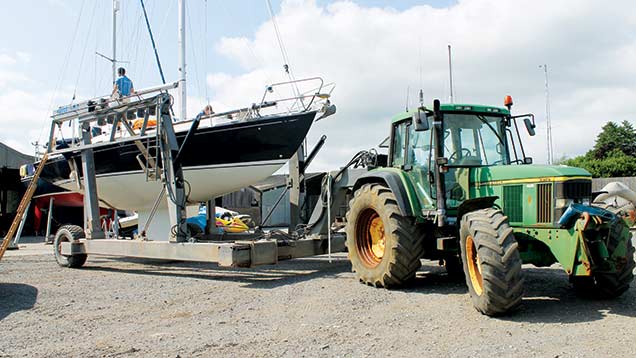 Farm diversification is all about making the most of your assets – and when you live on the shores of the Dart Estuary branching into boating seems a sensible option.

But when you have no experience of running a boatyard or large landscaping projects it suddenly looks a lot more daunting, as the Fry family discovered in 2006.

“Farmers are always being advised to diversify, and as we had no traditional buildings to convert into cottages we focused on the major asset on our doorstep – the river,” says David Fry.

“I had boats, and had worked on them in the past having spent some time at Simco based at Baltic Wharf in Totnes.

“Even with that and experience handling large farm plant, craning out the first boat from the new slipway was quite daunting.”

Obtaining planning consent for the yard, track and slipway was a monumental task but the family used a team of professionals including a landscape architect who designed the controversial track to follow a historic cow track down to the river.

That was screened with bunded banks on either side which, once landscaped, blended in into the surroundings and encouraged wildlife, enabling permission to be granted.

With the help of a 40% rural development grant – without which the project wouldn’t have been possible – the Frys built a large general building for boat storage, as well as the track and slipway.

“The track alone was a huge investment, costing around £100,000 due to the necessary excavation works,” says David.

“It needed to be 6m wide to cope with the lifting equipment used for craning up to 38ft yachts in and out.”

As the farm is in an Area of Outstanding Natural Beauty various studies were undertaken and the planning permission had some stringent conditions including no tarmac or concrete surfacing on the track.

The family have also planted more than 17,000 trees and created Devon hedges and banks, and planted wildflowers on the verges to ease grass maintenance, make it look pretty, and encourage wildlife.

“Customers love the drive to the slipway past the grazing fields; it’s the very essence of diversification,” says David.

“Customers love the drive to the slipway past the grazing fields; it’s the very essence of diversification”
David Fry

However, the investment didn’t stop there.

As the river is so tidal, boats can’t be launched and recovered using the slipway at low tide, so he hopes to extend this again so that visitors can return to shore any time.

David made all the galvanised boat stands and cradles for the boatyard himself, and in 2009 Blackness Marine came second in the Devon County Show’s Farm Diversification of the Year competition.

“We’ve had to invest so much into boat-lifting equipment and so on, but thankfully we already had a range of suitable John Deere tractors on the farm.”

“The boatyard has taken about 6ha away from the farm, but it’s got huge earning potential in comparison – and boats don’t need C-sections on Christmas Day,” says Marilyn.

The cows calve from late winter until May, with the fattening stock housed over the winter and finished for a local butcher at 14-months-old and about 300kg.

Marilyn manages the farm office work and shares a bookkeeper with the boatyard office, with Richard running the farm as a sole trader and the boatyard run as a family partnership.

“I grow oats, winter wheat and spring barley as well as forage maize and grass, although I’ve let a couple of fields out for fodder beet and left two fallow for greening,” says Richard.

“I’m coming up to 65 now so I get some extra labour at busy times or a contractor to do the ploughing and so on.

“British farming is the best in the world but we can’t manage without subsidies,” he adds.

“The costs involved in countryside management are high and subsidies are crucial if we are to deliver competitively priced food. Like many farms, we needed support to survive, which is why we decided to diversify.”

Although David still helps out with baling and combining, the busiest periods for both businesses clash, so they tend to remain fairly separate.

“That said, they are geographically side-by-side, so we hear the cows, and smell them too when wintered. We also share as much machinery as we can,” he says.

David and his partner Becky Taylor – who runs the marine office – cater for a broad range of customers, from day launches to year-round storage and maintenance.

Day launches (including parking) cost £12.50 plus VAT, while year-round covered storage with unlimited launch and recovery starts at about £1,500/year plus VAT, depending on boat size.

“We get a lot of day visitors because our low-pressure launching facility is perfect for novices, and parking in Dartmouth is so difficult,” says Becky.

Dartmouth Regatta in August tends to be one of the busiest weeks of the year, which made the birth of their daughter on regatta Saturday somewhat challenging.

“No ferries were running which meant driving the long way round to get to the hospital at the same time as our customers were returning from a night on the river.”

Having visited other boatyards around the country, two years ago David decided to go for further expansion in the form of a custom drystack building, new marine office at the entrance to yard, and a house on-site to replace the mobile home his family had occupied since 2008.

To try and reduce costs the family used stone dug from one of their fields as hard core for the site of the drystack building.

“The concrete alone was massively expensive as it had to be of such high specification, reinforced to take the weight of boats and lifting plant,” says David.

“However, once at capacity the new building should pay for itself in two to three years.”

The drystack building can house up to 140 boats when stacked three high, which can be accessed and launched at a few hours’ notice.

“It’s the only stacked storage of its kind on the Dart – we finished it in April and it’s doubled our covered storage capacity,” he says.

“Drystack owners generally have access for eight months of the year, then we lay their boats up for winter and can fit other boats inside too.”

He uses a 10t forklift to move the boats – although he will need a larger one when he builds the third tier of storage.

A hydraulic trailer is used for launch and recovery, with a ship hoist for yachts and large motor craft.

“I wish we’d bought a bigger one to start with – there’s just so much investment needed all the time to keep up with demand.”

David is also roofing an area between the sheds to create new workshop space, and plans to harvest the rainwater for washing the boats.

“Because it’s a working farm it can be dusty, so we use a lot of water cleaning boats each year. We’re on meters so it’s really expensive – if we collect rainwater from the roofs we should be able to hold about 55,000 litres.”

The workshop carries out routine servicing, repairs and maintenance on vessels and engines, as well as high-end varnishing and insurance works.

“We also have Suzuki and Yamaha sub-dealerships and with servicing and valeting we’ve got to the stage where we are recruiting more staff.”

Blackness Marine now employs around seven people, including apprentices, and brings a considerable amount of money into the local economy through employment and business rates.

“Most of our customers use local shops and pubs so the money stays local,” says David.

“We only advertise in the Dartmouth Harbour Guide and our website – other than that we’ve grown purely through word of mouth.

However, with that expansion comes a new threat – security.

“It’s a massive issue,” says David. “In 2011 we were one of many yards on the south coast targeted by organised crime groups and had £80,000 of outboard engines stolen.

“We immediately invested £30,000 in alarms, CCTV cameras, and electronic gates and upgraded the electronic barrier entry system to ensure site security was robust. We no longer allow access past 9pm as a result.”

Although it was a completely new business to him, David always had a fairly clear idea of what he was trying to achieve at Blackness.

“We started slowly, but I knew I wanted to grow, which is why we fought for the wider track and then the larger shed.”

It may all sound extravagant, but the family aren’t sitting on vast capital sums. “None of it would have been possible without the RDA grant and supportive bank managers. It’s a solid business plan though and we can look to the future and expand with confidence.”

He’s also had to learn a completely new set of skills.

“Coming from the solitary world of farming a decade ago to being customer facing and on call 24/7 was challenge,” he says.

“When there’s an issue you have to respond quickly – so it’s not all smooth sailing.”