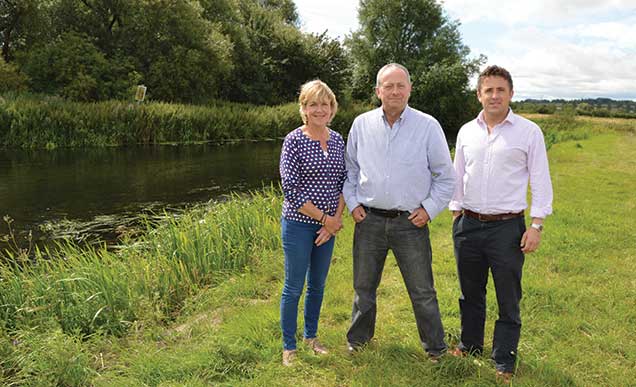 The field spent half its life flooded anyway, so it wasn’t much use for arable. Not much use for much really,” says Northamptonshire farmer John Skinner.

Said field will soon look completely different – it will be covered in river water and boats as opposed to grass and sheep.

See also: Farmer on the Dart Estuary diversifies with boatyard

John and his wife Debbie are on the final leg of a long development project and steep diversification learning curve that will turn one of their fields into a marina. Situated on the River Nene, the 10th longest river in the UK, the White Mills Marina is due to open in October.

Qualities you need to diversify

“The only water I had ever seen was the water in a glass,” John says, on a short break from combining the oilseed rape. He reckons he is still very much a farmer and no expert in either diversifications or marinas, but he is simply trying to make the most of the assets he has in order to support the future of their 70ha arable farm and their three sons.

While he wouldn’t claim they have been “forced” to diversify, some difficult times on the farm led them to where they are today. When the foot-and-mouth crisis struck at the beginning of the century, Debbie and John decided to sell the sheep that once resided at Pastures Farm due to market conditions, leading them to consider other avenues of income.

They turned the old sheep buildings into starter industrial units and one day a friend suggested to them that their field on the river would make an ideal marina.

“We sat on it for about five years,” said John “and then one day stood there and thought it was probably not such a silly idea.” From the lightbulb moment, it took five years to get the green light with the planning permission to build. John thinks it could have happened more quickly, but with no prior experience in this area, they took their time.

The Skinners were fortunate not to face much opposition when it came to planning permission. With the pretty and well-equipped village of Earls Barton only a short walk away, it will hopefully benefit from the extra tourism, so the parish council were very supportive and the Environment Agency wants to double the number of boats registered on the 93-mile long River Nene, which sits at about 1,000.

“The river is quite underused,” said Debbie “so it will benefit from having more facilities along it.”
That said, there have been a lot of hurdles to jump and boxes to tick. John says they have undergone surveys for just about everything – the archaeology, the otters, the bats, but “rightly so”. “You have to make sure you put more back than you take out.”

“We were thrilled when we finally got permission in September last year, but also daunted by what came next,” said Debbie. The development was put out to tender and the Skinners chose Land and Water Services to carry out the work.

Building began on 1 July and is currently in full swing, with 11 full-time staff on site. At the time of FW’s visit, the site looked somewhat like a child’s play mat, littered with giant lego blocks. Because of the nature of the soil, they have to use concrete blocks to help build up the banks which the jetties will attach to, and to level the field with the river water. You can see, however, how picturesque and peaceful it will be, completely surrounded by countryside.

Site manager David Purchon says he has worked on several marina projects that are farm diversifications and he finds farmers are good to work with because “they know how soil works, they understand materials and they understand holdups caused by weather”.

John and Debbie have benefited from the advice of farmers who already have the “marina diversification T-shirt”.

Of the eight marinas they visited as part of their research, three were connected to farms.

Dairy farmers and owners of the award-winning 230-berth OverWater Marina in Cheshire, Janet and Angus Maughan, have shared their experience with the Skinners and helped them set their sights high.

“We want to create something that is special and we want to be winning trophies in five years’ time,” says Debbie, who believes those aspirations will help them make the marina as good as it can be.

Consisting of 141 berths, the marina will welcome short- and long-term moorings and provide high-quality facilities. As well as providing the usual parking, showers, loos and laundry, the marina will have a coffee lounge and a small chandlery shop.

Debbie is able to pull on her experience working in PR and publishing to manage the marketing side – advertising in industry magazines, sending her sons off to put up roadside signs and using social media to spread the word.

A recent highlight was sharing a page in the Canal Boating Times with Timothy West and Prunella Scales, who presented the Channel 4 series of Great Canal Journeys.

Before the opening later this year, they will hold four open weekends to allow visitors to get a preview of the marina in the making, so the whole family are brushing up on their waterways knowledge.

“You have never had a job interview in your life, Dad, and now you are holding interviews,” joked eldest son Sam about the process of employing staff for the marina.

While the family will stay very involved, they recognise the need to have a manager with experience of the sector to allow them to focus on their own careers and the farm.

“We plan to be very hands-on initially and we will have weekly meetings with the manager,” says John. “But we need someone who understands the ins and outs of day-to-day management”.

John says when it comes to diversification, his theory is if you think you would regret not doing it when you are 80, it is best to give it a go.

It is clear John and Debbie view this diversification as a long-term investment, one they hope their sons will benefit from and that will finance growth and hopefully expansion of the farm.

John said: “We hope for some payback in 15-20 years, and I wouldn’t get that if I invested the same sort of money in land.”

He is still unsure whether he will be getting his own boat to moor at White Mills though. “I can’t even swim!” he says.