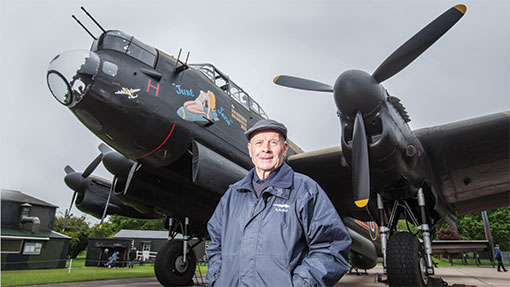 Farmer Harold Panton was just 11 when the family heard that the Halifax bomber his older brother was aboard had gone missing over Germany. This sad news inspired the restoration project of  a lifetime. As the nation commemorates the 70th anniversary of D-Day, Hayley Parrott reports.

Through the metre-wide gap in the hangar door, she was visible. Standing 20ft tall, 69ft long, and with a wingspan of 110ft, the four propellers of Just Jane glisten.

Just Jane is a Lancaster bomber that has been lovingly restored by poultry farmer Harold Panton, 80, and his brother Fred, who sadly passed away last year, in memory of their older brother, Chris, who was lost in the Second World War during service with the RAF Bomber Command.

It was Chris’ role in Bomber Command that sparked his brothers’ interest in bomber aircraft.

From their home in Old Bolingbroke, Lincolnshire, they could see the East Kirkby airfield and used to watch the planes set off and listen out for their return. “They would literally fly right past my bedroom window,” Harold says. “Of the 55,000 bombers who died, 25,611 of them were from Lincolnshire and that’s why they call it Bomber County.”

It is on the East Kirkby airfield, which Fred and Harold have turned into Lincolnshire Aviation Heritage Centre, where Just Jane stands, as the “lifeblood of the place”.

The brothers were initially thinking about buying a Halifax, but as timing had it – within a few days of Fred’s trip to find his brother’s burial site in Germany in 1972 – a lady working on the Pantons’ poultry farm showed Fred a newspaper advert for a Lancaster bomber. Harold said: “Fred looked at me and said, ‘We better have that’.”

So the brothers went off to Squires Gate in Blackpool, but unfortunately they were outbid. The gentleman who bought the bomber said if he ever decided to sell it, they would be the first to know. Thankfully, they were contacted in 1983 and they snapped it up.

In the meantime, they had bought the airfield in 1981. “When they started ripping up runways and knocking down airbase buildings in the 1960s, Fred and I said to each other ‘Do you remember when the Lancasters were here? If that control tower ever comes up for sale, we’ll make sure it doesn’t get knocked down’.” And they were as good as their word.

Long trip back from Australia

The Lancaster NX611 was built in April 1945 so never actually took part in a wartime mission. However, following the war, the plane was used in French maritime reconnaissance and ended up in Australia. It took 70 flying hours over three weeks to return Just Jane to the UK. A typical Lancaster crew would consist of seven men: the pilot, the navigator, the flight engineer, wireless controller, two gunners and a bomb aimer.

Without anywhere to house Just Jane, Fred and Harold had to build a hangar. Harold said that when they built it they thought: “We’ll put it in there and come and look at it on rainy days”, but as soon as people got wind of the Lancaster’s arrival, everyone told them it would be a shame not to let people see it.

So the brothers decided to share their pride and joy with the public and turned the airfield into Lincolnshire Aviation Heritage Centre, which was opened in 1989 by Sir Michael Beetham, Marshall of the RAF. The centre now boasts a museum, a memorial chapel, a café and shop among its attractions.

The four engines of Just Jane hadn’t been started in 20 years, but one by one they got them all going again with the help of engineer Ian Hickling. Although the engines were one of the most difficult parts of the restoration, Harold says they were also one of the most rewarding. “Even though we start the engines twice a week for the taxi runs, it gets me every time. Never fails – there isn’t another sound quite like it.”

And he’s not the only one who feels that way. Graham Ward, owner of a nearby farm shop and restaurant, says: “We can hear it when the engines start. To see it is impressive, but just to hear the engine really gets you.”

Impressive to look at is an understatement. The Lancaster has been beautifully painted. Just Jane is named after the comic strip heroine from the Second World War. And Harold says even the number of spots on the two-piece swimsuit in the painting are identical to the original comic strip.

Further down the plane, there are three letters on each side: on the left, LEH, and on the right, DXF. The LE and DX represent the 630 and 57 bomber squadrons, which were based at the East Kirkby airfield. The addition of the H and F – the brothers’ initials – was suggested by Fred’s grandchildren after he passed away. Fred’s initial is on the same side as DX because a close friend of his flew with the 57 bomber squadron.

Needless to say, the restoration has taken a lot of hard work, passion and determination – all traits that have also been crucial in the development of the Panton family’s farming business.

Their farming story began when Harold’s father, Edward Stote Panton, a gamekeeper and rabbit catcher, purchased a 3.6ha smallholding in 1949, complete with barn and house, and bought 28 chickens to keep on it. Harold says his father always wanted to pursue a farming life. “I remember him lying on the grass looking up at a singing skylark and saying: ‘One day I’ll be as free as you are’. And he was.”

Harold says the key to their success was steady investment, buying any neighbouring land that came up for sale and investing any money in stock and new poultry buildings, second-hand and eventually new.

“Fred and I didn’t take a wage until we were married, and when I did my national service I managed to save £43 over the two years, which I used to buy a breeding sow,” says Harold.

The F & H Panton brothers poultry business is now managed by Fred’s son, David, who has clearly inherited his father’s ambitious nature. “I love a challenge, it’s a bit of a family trait,” says David. “I believe that once you stretch yourself, you never go back to your original place.”

They now have six poultry sites, with 19 staff and 1.5 million birds, equating to the production of 1t of poultrymeat every 20 minutes.

Fred and Harold worked together across the poultry business and the aviation centre. “We didn’t always see eye to eye, but we never fell out and we never swore at each other,” says Harold.

It’s still very much a family affair, with Fred’s son Phillip and his children taking active roles in the management of the aviation centre. Fred’s grandson, Andrew, holds a pilot licence and takes Just Jane out on taxi runs.

“I told him to keep track of how many miles he has done and by now he could have driven to Berlin and back,” says Harold.

While they’re reluctant to set a date, they are still very much working towards getting Just Jane airborne once again. With four airworthy Rolls-Royce Merlin engines and the fuel tanks almost ready, they’re making good progress.

Harold says that, while he would like to take to the air in Just Jane at some point, the first time she flies he wants to be on the ground to see the wheels leave the ground.

The engines cost about £130,000 each, but as far as the total cost of the project is concerned, the family have never divulged it.

Harold said: “People ask me how much we paid for her, how much we’ve spent and how much she’s worth – not that we would ever sell her – but we don’t disclose that information. Once we do, the mystery’s gone.”