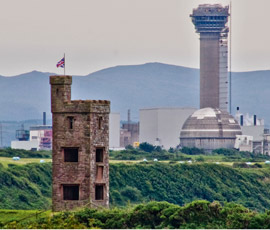 Tony Sharp has been admiring – and climbing – Braystones Tower all his life.

The 58-year-old made the precarious ascent up the interior of the landmark for the first time as an eight-year-old boy “to see if I could do it” – and remembers the escapade like it was yesterday.

“The floors were still in then, but there was still a bit of climbing to do and, well, I suppose it was a bit dangerous,” he reflects. “But when I got to the top it was worth it. I felt like I was on top of the world. I could see for miles.

“From the top, you can see England’s highest mountain, Scafell Pike, to the east. On a clear day you can see Scotland to the north and, over to the west, across the Irish Sea, to the Isle of Man.”

Tony survived the telling off he got from his Dad – who’d observed his ascent with disbelief from the farmyard – and a love affair was born.

Since that day the tower has become part of his psyche and so when he discovered that it was in urgent need of repair it was almost inevitable that Tony would step up to the plate.

Tony, who farms cattle and sheep on his 40ha Holme Croft Farm, Braystones, with wife Morag, saw for himself the parlous state the tower was in when he climbed it once again last year to fly the union flag in celebration of Queen Elizabeth’s Diamond Jubilee.

“I went up and fixed the flag to the turret with a 45ft scaffolding pole and floodlit the whole thing with a generator so it was illuminated when night fell,” he says.

“It was an amazing sight but while I was up there I noticed that the metal girder which supports the smaller turret was badly corroded, and the lintels above the windows were also in a very bad way. The whole thing is basically gutted and open to the elements now.

“I decided I had to do something about it because I was born here in the farmhouse – my family’s been here since the beginning of Second World War – and the tower has been an important part of my life, as well as being central to the heritage of the whole village.”

The tower – listed Grade II in 1991 – was built by local squire William Henry Watson to commemorate the Diamond Jubilee of Queen Victoria, Empress of India. 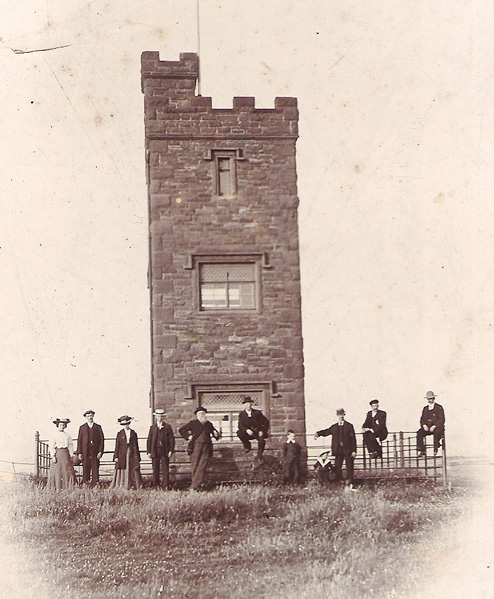 He could afford to build it because his father, William Hough Watson, had invented Sunlight Soap, the world’s first packaged, branded laundry soap.

At its opening in 1897, Watson – a staunch royalist – proclaimed that an annual sports day would be held at the tower each year on Empire Day, May 24, when the union flag would be flown and the local children reminded of the glory and power of the British Empire. In subsequent years, Cumberland and Westmorland wrestling competitions would also be held there.

In 1920 a war memorial commemorating the 10 local men who gave their lives in the First World War was added to the tower. It also honours local soldier Harry Christian, recipient of a prestigious Victoria Cross gallantry award. Christian was a 23-year-old private when he rescued three of his comrades from a crater at the height of a ferocious bombardment at Cuinchy, France, in 1915.

“I decided I had to do something about it because I was born here in the farmhouse – my family’s been here since the beginning of Second World War – and the tower has been an important part of my life, as well as being central to the heritage of the whole village.”
Tony Sharp

Tony – who’s received the backing of his parish council and the support of cousin Marshall Palling on whose neighbouring land the tower stands – has launched a fundraising campaign and applied to the Heritage Lottery Fund to meet the estimated £60,000 bill for the work. He is also looking for help from English Heritage and Copeland District Council, under whose jurisdiction the tower falls.

“We need to raise £60,000 to reinstate the three floors, install a new door, lintels and windows, and put in railings and an access road,” he says. “It’s like a hollow shell inside now and we’ve got to act. “We’ve got volunteers who are keen to go up there on a weekend, open the place up and let people in.

“We also want to improve access to the tower because at the moment it’s quite dangerous. There’s no road up to it. You have to take your life in your hands going round by the river and ascending the hill. So we want to put a proper path in up to it.

“Incredibly, at the moment, a lot of people look up at it and wonder what it is, but they can’t get to it.

“I want to bring the whole thing back to its former glory. Now we’ve started going down this route, we’ve got to do it properly.”

The restoration of the folly will also help re-generate Braystones, a scattered agriculture-based community only five miles south-east of St Bees – the start of Alfred Wainwright’s celebrated Coast to Coast Walk – which has become a popular holiday area.

“The tower – which the locals called Watson’s Folly – needs putting on the map,” says Tony.

“After I put the flag up in June there was some local publicity and a week later a woman who’s lived only 10 miles away in Whitehaven all her life produced a photo showing her family standing around the foot of the tower sometime before 1920. She said she hadn’t known – until now – where the tower was. That’s why we need to put it on the map.” 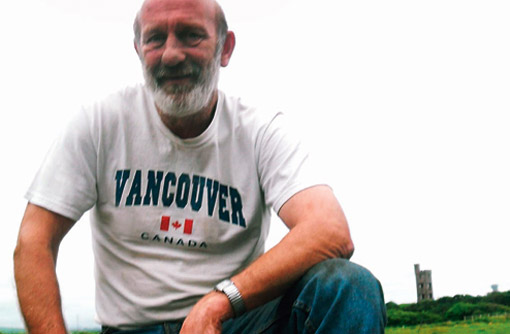 Tony Sharp with Braystones Tower in the background.

For a relatively small folly standing 10ft square and only 30ft high, Braystones Tower has an extraordinarily colourful story to tell.

In the early part of 20th century, owner William Henry Watson briefly turned it into a miniature museum, filled with Stone Age flints, axes and arrow heads drained from nearby Gibb Tarn (and now in the British Museum).

He also positioned two small cannons, brought north from the Woolwich Arsenal in London and said to have been used at the Battle of Waterloo, at either side of the tower’s door.

“After he died everything was taken out of the house and the tower and put on the lawn and auctioned,” says Tony. “Everything valuable went.

“But I am sure can bring the tower back to life. It’s so unique, the location is spectacular and the red sandstone it was made of is still in perfect condition.

“It will surely see better days once more. I’ve got it under my skin to see this through. The tower’s been there for 100 years and if it’s restored it’ll be there for another 100 years.