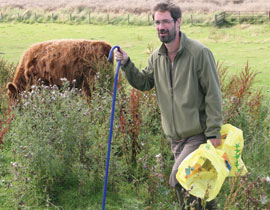 His first book, Natural Causes, has been downloaded more than 200,000 times, taking it into the UK top spot of Amazon’s free download list, while his second, Book of Souls, has sold over 10,000 paid-for copies since June.

He writes crime novels in tandem with keeping Highland cattle and New Zealand Romney sheep on 135ha near Newburgh in north-east Fife.

The road to success hasn’t been easy for the 45-year-old, who was knocked back by traditional publishing houses.

“I have been sending manuscripts to publishers for the past 15 to 20 years, but publishing houses get 100-plus manuscripts a week so to get noticed in the mainstream is very hard,” says James.

But it all paid off as his work became an online success. “The e-publishing industry was my breakthrough.”

He recalls the moment he saw his book was number one on the Amazon list. “I wasn’t expecting it. It really doesn’t get much better than that.”

Juggling the two starkly different professions, James’s mind is constantly on the move.

“There are times when the livestock require a lot of work and I won’t be writing at all at those times. However, at the moment the animals are not requiring too much work. I am up on the hill with the quad three times a day checking them. I am managing a bit of time writing but, to be honest, I write best between 8pm and midnight anyway.

“When I am checking the cows, sometimes my head does tend to wander towards Inspector McLean – the character in my books – or if I am in the tractor, driving back and forth, I might have an idea. I am going to invest in one of those digital recorders to avoid losing the ideas while working.”

Other than that, life hasn’t changed much for James. “I haven’t got all my money yet so I still haven’t bought a new tractor! I am currently in talks with an agency regarding a paperback publishing deal for my books. So I suppose in six months’ time, life could be different.

“Maybe I could retire and pay someone else to look after the sheep,” he laughs.

“On a more serious note, if the writing keeps going the way it is, I might be able to get a few more hands to help but I’d still do both. I like the cows. They are great characters, even the ones that are a bit wary. I’ll not be giving up the farming.”