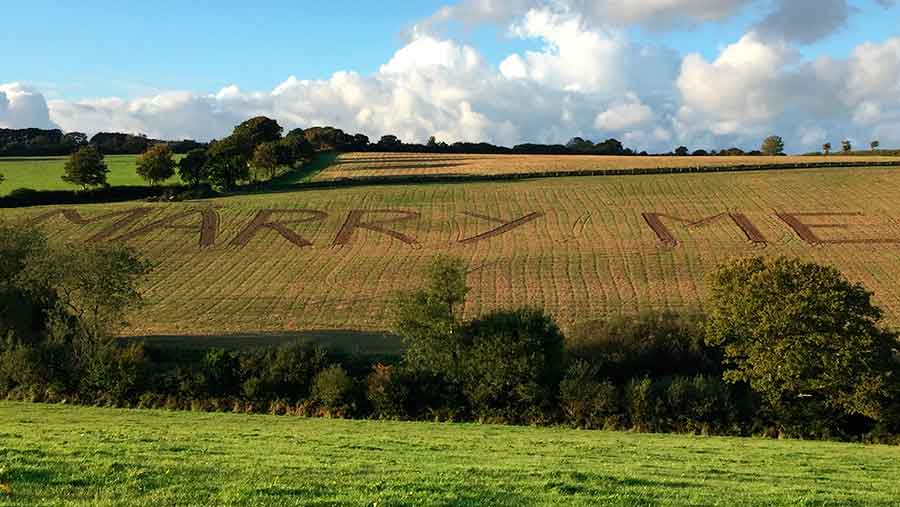 Farmer’s daughter Jenna Stimpson got the shock of her life when she discovered her now fiancé had ploughed the words ‘marry me’ into a field on her father’s farm in Devon.

After combining the 12ha field of spring barley, agricultural engineer and contract farmer Tom Plume spent the whole morning on 14 September ploughing the letters before taking his girlfriend across the valley to propose.

Miss Stimpson, from East Anstey, said she had no idea what Mr Plume had been planning.

See also: So you want to run a… farm-based wedding venue

“I had not a single clue,” she told Farmers Weekly. “Everyone has been absolutely astounded as Tom is quite a quiet character normally.”

She said she thought Mr Plume was inspired to plough 10m-high letters into the countryside from an incident that happened early on in their nine-and-a-half-year relationship.

“Soon after I met Tom I was topping in the field next to the one he used. I topped ‘I love Tom’ into the crop.

“Someone across the valley phoned up because they could see it and was like ‘what are you doing?’”

Miss Stimpson grew up on the organic mixed beef and arable farm, which is still run by her father, and the couple took over running it for five years.

They introduced lamb and pigs, and produced organic meat boxes, but despite their efforts couldn’t make the business successful enough to continue.

“That’s why I’m so attached to the farm, and why he proposed there, we spent five years there slogging away,” she said.

Despite making such a sizeable proposal, Mr Plume had not intended for it to be so public.

“He said just last night it was something he wanted to do privately between us, that’s why he did it in that field because he didn’t want anyone to see it.”

But Miss Stimpson’s proud mother couldn’t keep the romantic gesture to herself.

“I can’t believe it has gone as big as it has. I’m over the moon, it’s all been very exciting.”

The couple are considering continuing the farming theme in their nuptials, and are looking into holding it on the farm in 2018.

“I would imagine Tom will turn up to the church on his harvester or combine, but that’s fine, as long as he is smiling,” she said.