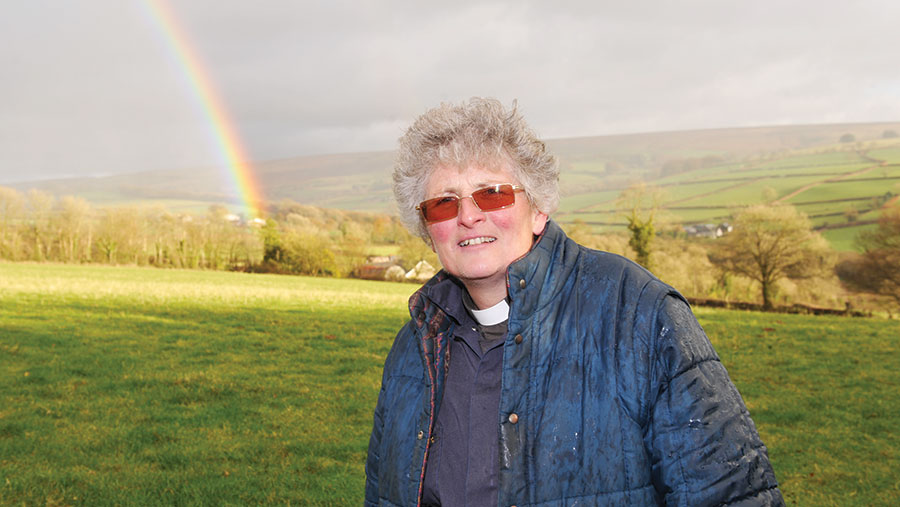 When dawn breaks on Christmas Day, Eileen Davies will be in the milking parlour – because cows don’t recognise 25 December as a national holiday.

Once the milking is done and the cows and sheep have been fed, there will be little time for a breather. Eileen has another flock to tend to.

Otherwise known as the Reverend Canon Eileen Davies, she is a priest and the Church in Wales’s rural life adviser for the Diocese of St David’s.

Eileen grew up on a smallholding in the Carmarthenshire hamlet of Llanllwni, less than a mile from the dairy farm of Gwndwm that she now runs with her husband, Dyfrig, and 19-year-old son, Owain.

Her parents weren’t particularly religious. “My father was a once-a-year worshipper and my mother went once a month.”

But Eileen’s faith was nurtured by a neighbour who took her to Sunday school every week. “She was very religious, I was overawed by the example she set,” Eileen recalls.

So much so that, aged just nine, she declared that the grown-up Eileen would become a vicar and dairy farmer, even though the Church in Wales didn’t ordain women at the time.

That prophecy came true 12 years ago when, at 40, she was ordained. “We had a woman deacon here at Llanllwni and she asked me if I had considered becoming a priest.

When Dyfrig and I discussed it, he said he had seen it coming for a long time and was very supportive.”

Eileen embarked on a part-time theology course. Although the tutorials were delivered locally, there were residential weekends and summer schools.

“These always seem to fall on Royal Welsh Show week. I did sometimes mitch off the final day to go to the show!” she now confesses.

She is now parish priest to Llanerchaeron, Cilau Aeron, Dihewyd and Mydroilin – a role she combines with her rural life adviser role, which she was offered after the bishop spotted her on a TV programme about farming.

“He said that anyone who was prepared to appear on S4C and put her hand up a cow’s backside had the qualities to be an adviser on rural matters!”

The role keeps the clergy in touch with what is happening in rural areas. She can connect with farmers because, in her words, she speaks their lingo. She is a well-known figure at livestock markets, sales and shows.

“Farmers know I am there and that, if there is an issue they want to discuss, we can go to the mart café to have a chat over a cuppa – or I will drop by the farm to see them.”

Eileen’s clerical collar gives her that authority. “Once you are wearing that dog collar, they recognise what you stand for. But when I’m at home I’m just Eileen Gwmdwn, or when I’m with the YFC I’m Eileen Llanllwni.”

Listening is often more important than giving advice. “Once a person has had the opportunity to speak to someone who is willing to listen, they realise that there is someone out there who cares for them,” explains Eileen, who is also secretary of Tir Dewi, an organisation that supports farmers in west Wales.

“If you have their confidence and trust, they will share their problems. More often than not, they are able to solve their own problems, but they haven’t been able to see the wood for the trees.

I won’t have all the right answers, but I might know someone who does so I can point them in the right direction.”

On top of financial worries, bovine TB is casting a long shadow over the lives of the farmers Eileen comes into contact with in this corner of west Wales, and she sits on the South Wales TB Eradication Board.

“I have recently visited farmers who have never had TB on their farms and they are getting it for the first time.

One farmer sells pedigree bulls and, because he is on stop, everything has had to be put on hold.

Farmers are in a desperate situation because they haven’t got enough feed to carry extra stock that they hadn’t anticipated having.

“Farmers are proud of their stock. If you took dairy cows out of my husband’s life, it wouldn’t be long before I was burying him. I think in the general pecking order the cows come first then me and Owain, before the sheep, I hope!”

And depressed milk prices are also responsible for the low mood among farmers. With a herd of 80 pedigree Holsteins, Eileen is only too aware of the challenges created by two years of low prices.

“From my priestly perspective I have a strong faith and, even though it is shaken every now and then and given a dust down, I have a faith that I can lean on when I’m at a low ebb. For many people that isn’t the case.”

As well as the dairy herd – and 120 followers – Eileen and her family have a flock of 400 Texel sheep. Owain, who is studying agriculture at Gelli Aur College as well as working on the farm, also has a small flock of Poll Dorsets.

YFC has played a big part in Eileen’s life – she was once chairman of the Carmarthen Federation.

“Every priest should have YFC public speaking training. It is a wonderful way to communicate your message. Perhaps it is not what you say but how you preach. It has given me the confidence to go out and do what I do today.”

Although Eileen meets farmers when they can be at their lowest ebb, there are also opportunities to come together at times of celebration.

A highlight this year was a harvest festival held at Carmarthen martground to raise funds for Carmarthenshire’s year as feature county of the Royal Welsh Show.

Eileen’s pulpit was the auctioneer’s rostrum and the service was held in the cattle ring. “We had 300 people there, people are still talking about it,’’ says Eileen, who organised the event and took the service.

“We managed to get people there who perhaps might not have come to church or chapel, even though it was a religious service. It demonstrates that you don’t have to put religion in a box.”

There was a similar response to a tractor run she held in her parish on Rogation Sunday.

“Dyfrig and I both drove there on a tractor and Dyfrig warned me not to be disappointed if not many people turned up, but we had 70 tractors and several hundred people.

“We had organised enough food for only around 70 so we were frantically rushing around raiding our fridges. We weren’t quite feeding the 5,000 but it felt like that!

Heart of the community

Although rural congregations are dwindling, the church has a vital role to play in agricultural communities, not least because the church building is often the only public facility left in a country village, with the closure of schools, shops and pubs. Eileen says their use by the community should be encouraged.

I am all for opening the church doors. If you have a church vestry or a church hall, they can be used for so many different things. We held a curry night recently.

“If you get people to cross that threshold and they can see that we don’t bible-bash them but that we do offer the hand of friendship then perhaps they will come back.”

Christmas might well be that occasion. On Christmas Eve, Eileen takes midnight Eucharist followed by a glass of mulled wine and mince pies.

“Everyone enjoys themselves, if they don’t leave with a smile on their faces I haven’t done my job properly.

“I enjoy Christmas, but it is important for people to appreciate that the food on their tables on Christmas Day is there because of farmers and they have to tend to their stock on that day as if it is any other day.”

Eileen somehow finds time to cook the turkey lunch for the family gathering. Then it’s back out into the parlour to milk the cows.

“I really enjoy that part of the day. Then hopefully, when all the farm work is finished, there will be time to put my feet up.”