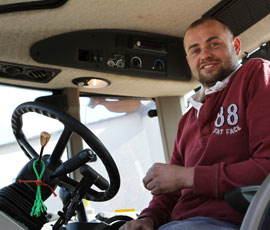 A farmer left paralysed by a falling bale is warning of the dangers of baling with the new haymaking season under way.

Robert Field was stacking silage bales on a neighbour’s farm with a workmate when the bale grab on the telehandler cracked as it struggled to put in place the topmost bale on a stack.

Mr Field, of Burnley, in Lancashire, got out of the telehandler to take a closer look at the problem and was hit by a one-tonne bale from six metres high.

The force of the blow broke his back, fractured his jaw and severed a main artery in his leg.

Mr Field was airlifted to hospital following the accident, in September 2007. Doctors feared he would die, but luckily the bale missed his upper body and head.

He survived but surgeons were forced to amputate his leg above the knee and he was left permanently paralysed from the waist down.

Neither he nor his colleagues had been trained in stacking bales and there had been no planning of the job.

As well as the emotional cost, there has been a big financial impact.

Mr Field, who was aged 21 at the time of the accident, has been able to work again, but he and his mother have had to employ extra staff to make up their farm’s workforce and it has cost £3,000 to adapt Robert’s JCB Loadall alone.

“I’m very cautious now in everything I do,” said Mr Field. “I didn’t think a bale would fall on me like it did.

“People who work on farms should make a promise to themselves and their families to come home safe at the end of the day. I very nearly didn’t.”

Graeme Walker, head of food and agriculture at the Health and Safety Executive, said: “Eleven workers have died in baling incidents since 2007 – Robert was one of the lucky ones.

“Baling doesn’t have to be a dangerous activity. With the right training and proper planning Robert and his family needn’t have gone through the emotional trauma they did. They also wouldn’t have had to pay for additional support and adaptations.

“Robert is an inspiration, but his story should also serve as a stark warning to others.”

The HSE has released new guidance on the “Safe working with bales in agriculture”, which is available to view online.