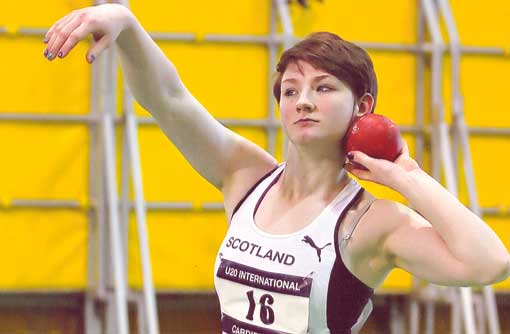 As a kid on the farm in Dumfries, Kirsty Yates used to challenge her two sisters to see how many straw bales each could carry. It put her in good stead for the serious weight training she’d be doing in the years ahead.

Scotland’s number one shot-putter – and number four in the UK – is now within tantalising reach of the 2014 Commonwealth Games in Glasgow, having already thrown the qualifying distance of 15.66m.

But the opportunity to line up against some of the greatest athletes of her generation comes at a price: a punishing, five-night-a-week training schedule, virtually no social life during competition season, and bar work and milking jobs to pay for all the mileage she racks up travelling between events.

“I’ll do 400 miles a week just for training, plus there are the competitions – Belgium, Cardiff, London I might just as well stay in the airport,” laughs Kirsty, who clearly thinks the sacrifice is worth it.

With so many demands on her time, it’s just as well her employers – pub landlady Sandra (aka Mum) and pedigree Holstein breeder David (aka Dad) are sympathetic.

“Both sides of the family are very competitive,” says Sandra, who runs the local Laurie Arms in Haugh of Urr.

Indeed, as soon as Kirsty steps inside the shot-put circle there may as well be a steel curtain around her. That’s when the poetry of motion kicks in as she spring-loads her 5ft 8in frame for the perfect throw.

“Usually, while I’m moving in the circle, nothing goes through my mind and the only word I say to myself is ‘go’,” says Kirsty.

“But when I was lying in fourth position the other weekend and I needed to pull something out for my last throw I was walking around the circle, talking to myself.”

That last throw put her in third place at the British Athletics World Trials and UK and England Championships in Birmingham. Some way short of her 15.87m personal best, it was nevertheless good enough to earn bronze.

Not that success on the sporting field is ever allowed to go to her head. Minutes after her bronze-winning throw she took a call from younger sister Jenny, 18, who was standing in for Kirsty in the calf-rearing sheds.

“I was about to step onto the podium in Birmingham. The camera was in my face and I was on the big screen yet all she wanted to talk about was the calves.”

Being fully involved in the day-to-day running of the farm keeps her grounded; as does the necessity, like many emerging world-class athletes, to fund her sporting career beyond the modest but welcome support she receives from the Bank of Scotland and Scottish Athletics. Which is why this month she’ll be the only Scottish woman lining up for the World Championship Highland Games.

The teeth-clenching test of strength and endurance is characterised by caber-tossing blokes in kilts, but it also features 10 women’s disciplines including the “farmers’ walk”, which involves carrying 140kg as far and as fast as you can.

The risk of injury is ever present, but being paid just to turn up to compete is a major draw. “And it’s really good fun,” Kirsty says with a smile, knowing full well her coaches don’t approve.

Like the tartan titans on the Highland Games circuit, Kirsty’s reputation tends to go before her. “You can guarantee that if I go out and there are folk about who know what I do, I will be asked to arm wrestle,” she says. “I’m absolutely rubbish at it, but they don’t give up and I let them win mostly.”