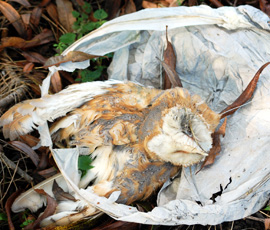 Chinese lanterns continue to cause death and injury to countryside animals, as this picture of a dead barn owl shows.

The photo was taken by Simon Pain of Billow Farm, after he found the bird dead after it was trapped in a lantern.

The RSPCA published the photo to highlight the dangers to wildlife and farm animals caused by Chinese lanterns.

The RSPCA, RSPB, the Soil Association and the The Marine Conservation Society have joined forces with the NFU to raise awareness amongst the public on how laterns can harm and kill farm animals and wildlife and have caused fires to crops, grassland and hay and straw.

David Bowles, director of communications for the RSPCA, said: “I think most people who saw the kind of injuries or fatalities we have would think twice [about flying lanterns].

“Cattle have died after bits of Chinese lanterns have fallen into their feed, baby birds abandoned after their parents are spooked by a fireworks explosion and scraps of balloons landing in a field could be eaten by any animal from a horse to a pet dog with fatal consequences”.

The RSPCA are appealing to the public to Write to their local MP or to sign a petition to call for a ban. You can find out more from their website.