“If there is one thing that I would credit my weight loss to, it would be ham and scrambled eggs.” So says Stuart Roberts, Hertfordshire farmer and self-styled “big” character.

In just a year, not only has Stuart shed 10 stone but, at the age of 41, he is limbering up to run his first marathon.

“I weighed the thick end of 27 stone in January 2016,” Stuart recalls. “I’d done no sport since college 20 years ago and the only thing I’d ever run was a bath.” 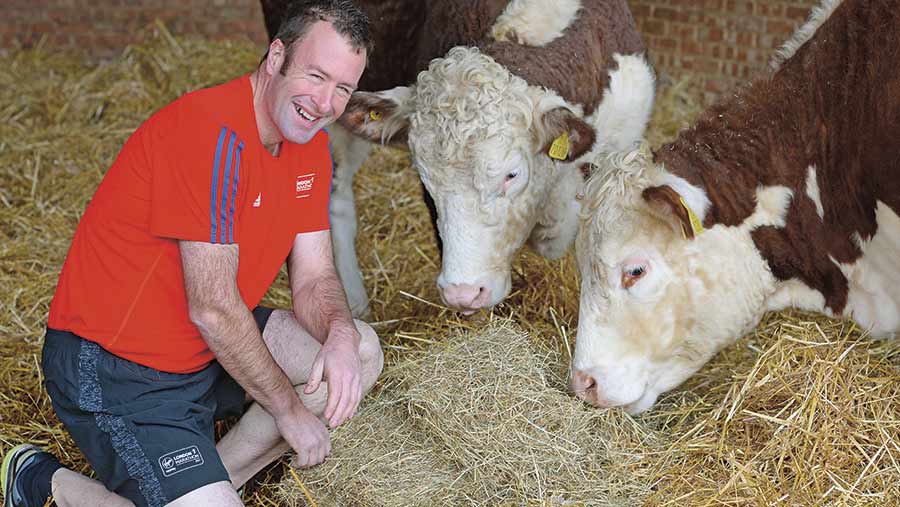 See also: 6 farming similarities between the UK and Africa

Roll on to February 2017, and the six-foot-five-inch organic arable and beef farmer from Hammonds End Farm, Harpenden, turned the scales at 17 stone – and has the picture to prove it.

“There’s no surgery or mystery,” he laughs. The weight loss is the result of a simple diet of “protein for breakfast, plenty of fruit and veg and no desserts during the week” and the simple premise “eat less calories than you burn”.

Streamlined Stuart is now focusing on training for the Virgin Money London Marathon on 23 April. “Every exercise is geared towards running now,” he says. “It’s all about putting muscle on.”

He’s pounding the lanes round the farm for up to nine hours a week and doing high intensive workouts and weight training back in the gym.

But Stuart is no convert to running. “It’s tedious and boring and, if it wasn’t for the marathon, I wouldn’t be a runner,” he says. “People told me I would get addicted. I haven’t.”

After 23 April, Stuart vows he’ll hang up his running shoes: “I’ll do cycling, hockey, rugby – anything but running.”

But he will carry on with eating healthily. “Once you get going, success makes it easier. It becomes a habit and a habit you enjoy,” he says.

So why does a confirmed non-runner set himself up to run a marathon? “I blame Twitter,” Stuart laughs.

Last June, at the time of the EU referendum, farm minister George Eustice suggested that subsidies could increase post-Brexit. Stuart’s friend and neighbour Jamie Burrows tweeted, with the emphasis on the word could, “We ‘could’ run a marathon.” 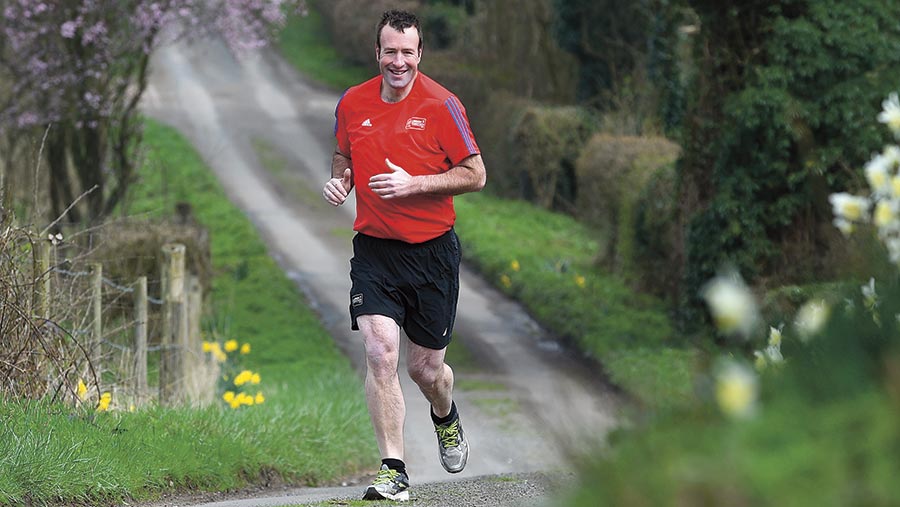 “Why don’t we?” Stuart responded. “It was a flippant comment that took hold,” he recalls.

Stuart’s amazed at the momentum that is building behind their effort. In February, a half-marathon organised for the opening of the NFU conference in Birmingham drew a big crowd.

“It was the first time we five had had the chance to run together,” he recalls. “We weren’t expecting so many others to join in.”

But join they did and the half-marathon looks set to become an annual event. And, by the end of March, The Jogging Farmers had raised £12,000 for Farm Africa.

This isn’t the first time that Stuart has fundraised for Farm Africa – a charity which believes that developing small scale agriculture is the key to reducing rural poverty for millions of Africans.

“It’s not about giving food. It’s all about building sustainable businesses,” Stuart says.

Founded in 1985 in response to the famine in Ethiopia, Farm Africa aims to give African smallholders “a hand up not a hand out” and now has 170 staff working across eastern Africa.

Projects vary from the small-scale – giving a goat to an individual family – to the more ambitious, such as the three-year, National Lottery-funded project to get 3,000 Tanzanian farmers in 10 villages growing and marketing orange-fleshed sweet potatoes.

The real catalyst for Stuart’s weight loss and fitness drive, however, lies closer to home. How eight-year-old son, Monty, is seriously into cycling and thinks nothing of a 50-mile bike ride.

“Dad needed to improve his fitness to keep an eye on him,” Stuart smiles. “Running the marathon is almost incidental.”

There was a second catalyst. As leader of the local NFU branch, Stuart found himself in the media spotlight. “Until I saw myself in a different medium, I didn’t appreciate how the weight had crept up on me.”

“I called in one day at his gym and asked if he fancied a BIG project,” Stuart laughs.

But Nathan plays down his role: “All credit to Stuart for his discipline. I opened the door but he’s walked the walk.”

Sponsor The Jogging Farmers at uk.virginmoneygiving.com

And a few don’ts from Nathan

Obesity facts and measuring it

The number of obese men in England has doubled in just over 20 years, from 13.2% in 1993 to 26.9% in 2015, according to figures published by Public Health England, an executive agency of the Department of Health.

Obesity increases your risk of Type 2 diabetes, coronary heart disease, cancer and strokes. It makes you more prone to depression and prey to a host of everyday problems from joint and back pain to increased sweating and snoring. Obesity reduces life expectancy by an average of  three to 10 years.

So what should we do? Eat less and exercise more, according to the NHS, which recommends a lower fat, high-fibre diet of fruit, whole grains, vegetables, lean meat and fish.

Recent advice from the School of Public Health at Imperial College, London, doubled the recommended daily intake of fruit and veg from 400g to 800g (“ten a day”).

In addition, adults should exercise for two-and-a-half to five hours a week and children over five for at least an hour every day.

Body mass index (BMI) is used to measure a healthy weight for your height. A BMI of 18.5-24.9kg/m2 indicates a healthy weight, 25-29.9kg/m2 that you are overweight and 30+kg/m2 tips the scales into the obese category. Calculate your Body Mass Index (BMI) at www.nhs.uk.

Or get the tape measure out. People who are very muscular can have a high BMI without excessive fat.

In 2014, a Canadian study of Saskatchewan farmers found 65.1% of them to be overweight or obese and laid the blame firmly at the door of increased mechanisation.

But Nathan Woods disagrees. “The farmers I see here in the UK are active and strong even though they may be an unhealthy size,” he says. “Farming is still a relatively active job.”

However, a study of farmers by the US magazine Modern Farmer suggests farmers shouldn’t be complacent.

Modern Farmer found a “startling” 80% of farm labourers in California’s Central Valley were obese. Many were recent immigrants in low-income families, but the magazine also reports that long working days, particularly at harvest, leads to a poor diet for farmers across the US.

With no time to cook or stop to eat, snacking on convenience foods is the norm.

In the UK as well as the US, the erosion of the traditional family farm structure is another critical factor undermining healthy diets.

With partners often working away from the farm to bring in a vital second income, there is no stay at home spouse to cook, bring the lunchtime sandwiches out to the field or act as relief combine driver.