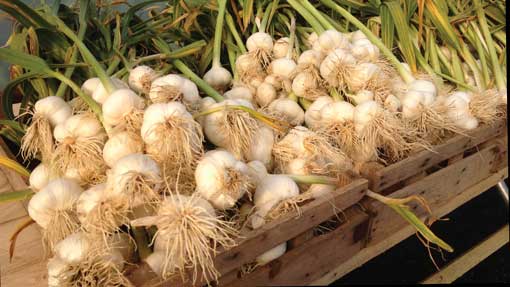 The shift from livestock to a niche crop has proved successful for one Dorset farmer, as Kate Chapman discovers

There have been no winter coughs or sneezes in Mark Botwright’s household for the last five years – in fact, no illness at all – and he believes it’s all down to the power of garlic.

The dad-of-two began growing bulbs commercially a couple of years ago after his wife Wendy bought him some as a gift – and since trading-in his flock of 600 sheep, he’s become one of the country’s largest producers.

The South West Garlic Farm grows several varieties of differing strength on 6ha of land in Bridport, Dorset, which have been championed by top chefs and restaurants including Michel Roux, Mark Hix and River Cottage.

More recently, the 51-year-old has pioneered the production of British black garlic – preserved bulbs which can be used all year-round – and the use of scapes in the UK. These are the flower stalk of the plant, a delicacy in Asia and America, which Mark has also ground down into powder form so the flavouring can be used throughout the year too. “Most people thought I was crazy,” says Mark, whose 17-year-old son Jack works with him.

“A lot of farmers wouldn’t consider making a major change from one discipline to another because of the upheaval and the cost.

“We are only in our second year of major production, supplying restaurants, farm shops and delis, as well as some big outlets in Bristol and London but it’s going very well – we are selling everything we produce.” 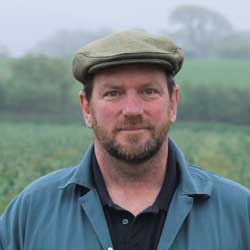 Mark (pictured above), who was raised by adoptive parents, credits his love of growing to his family, in particular his adoptive grandfather. “I spent holidays with my grandparents and we’d visit my grandmother’s sister’s dairy farm,” he recalls.

“My grandfather was in the Queen’s Scouts and was an incredible gardener. I used to spend all my time down on my hands and knees next to him, and he taught me everything about building things and growing.”

His first foray into farming started with two Jacob ewes after moving into a property with lots of grass; the flock swelled to 70 as the neighbours tapped into his efficient way of mowing the lawn.

Then Mark and Wendy took the plunge and bought their own farm in north Dorset, overhauling it, with extensive maintenance and new buildings.

“It was really good for about nine years,” recalls Mark. “We had 200 breeding ewes, producing 400 lambs – half would go to market and the other half we sold locally for meat.

“Then foot-and-mouth came and we couldn’t give the lambs away. We had around 400 and they weren’t even worth £15 each. The year before, they’d made up to £110 each. I couldn’t get the figures to work, it was just killing me.”

“I grew them once, and then decided to grow them again and dry them out, and their harvest coincided with our moving day. Our new place was just outside Bridport and I rented an acre field to put the bulbs in there and they grew really well,” he says.

“Then we bought where we live now, which had half an acre that had previously been a vegetable garden – the soil was amazing and we took 1,000 bulbs with us.

“It wasn’t even really a hobby, I was just always growing veg to eat – that’s all I wanted to do. This was about five years ago when we had 3,000 bulbs. The garden was just full of Elephant Garlic.”

After selling his farm, Mark worked in a variety of different jobs in building, gardening and teaching people how to grow vegetables, but it was Wendy who suggested turning the garlic into a business.

“I really had no idea what it would entail, so I did some research. We went to the local estate and asked if we could rent another half an acre so we could expand and see whether we could do it a bit more commercially.

“It grew very well as the soil there was very sandy; it’s free-draining – bulbs do not want to be sat in the wet ground for too long.

“Machinery for planting and harvesting garlic is mostly produced in France and is incredibly expensive – a planter can cost £70,000 and a harvester £80,000.

“So about three or four years ago, I went out and bought a cabbage planting machine, realised it wasn’t what I thought it would be, so I got the angle grinder out and cut everything off, thought about how it would work and added some drainage tubes.

“I use a lot of makeshift machinery – but nothing’s going to plant elephant garlic. The bulbs are the size of an egg, sometimes a duck egg, so a lot of it has to be done manually.”

Over time, Mark amassed 5,000, then 30,000, then 75,000 bulbs and production now stands at around 700,000 and he began marketing them properly two-and-a-half years ago. By his own admission, having the “front to approach people” has played a big part in his success.

“I set myself up on Twitter as Mark the Garlic and started tweeting all this stuff about garlic as that’s my life,” he explains.

“And it was through this that I was able to supply Michel Roux, River Cottage and all the big names. I just asked if I could send them something for them to take a look at.

“I couldn’t believe it when we sold out in the first two years, so I decided to up production 10-fold every year.”

After trials, a number of new varieties have been added to the farm including Iberian and Morado, strong-flavoured garlics both from Spain, and Violet Spring, native to South America.

Then 18 months ago Mark happened upon an online article about a pot of 4,000-year-old preserved garlic that had been found, leading him to try and recreate the recipe which he now sells as British black garlic – to critical acclaim.

“I did some research, although I didn’t really understand the process. I got nine bulbs and put them in a biscuit tin in the bottom of the Aga and left it for several weeks. “When I opened it, they really did smell quite unusual, not very garlicky – more like balsamic vinegar.

“It tasted absolutely amazing, so I went to all the restaurants and chefs and gave them half a clove each and everyone wanted to know where I got it from.

“I had to find some way of doing it on a bigger scale, which has involved me modifying some catering equipment so we can produce more. It’s top secret though – and we’ve gone from producing 20 bulbs to 1,500 and orders are coming in every week, with some orders as large as 500 bulbs.”

As well as his ability to put himself “out there”, the growing popularity of garlic as an ingredient has also played a huge part in the farm’s success. Not only are people travelling to more exotic climes, where garlic is more commonly used in cuisine, its health benefits are also becoming more apparent.

Research has established that the bulb – a member of the onion family – has antibiotic properties, helps with cholesterol, promotes a healthy immune system and is an anti-cancer agent. It’s also packed with nutrients, helps regulate blood pressure and blood sugar and can strengthen the immune system against allergies.

“We are on year five with no illness in our family, no coughs or sneezes. We don’t know it’s definitely down to the garlic, but it help proves our point,” smiles Mark.

“Being British producers, we have to compete with the imports – especially from China, which exports about 90,000 tonnes of garlic to the UK.

“I fell into livestock farming when we bought our first smallholding but I always wanted to be growing crops.

“Social media has definitely played a big part and I pay a lot of attention to what we do.

“All of the seed is prepared by us here in the polytunnels and is graded by me. Attention to detail on the depth of planting is crucial, seed placement is also very important.

“It’s really hard – you need to be fully dedicated to doing one thing. You cannot put the passion into it needed for it to work otherwise,” he says.