Ask most farmers what they get up to in their spare time and a spot of shooting, rugby or fishing will likely feature heavily in the replies.

You can always count on a few to complain that spare time is luxury that farmers never seem to have though, so imagine juggling your farm work with a relentless triathlon training regime. 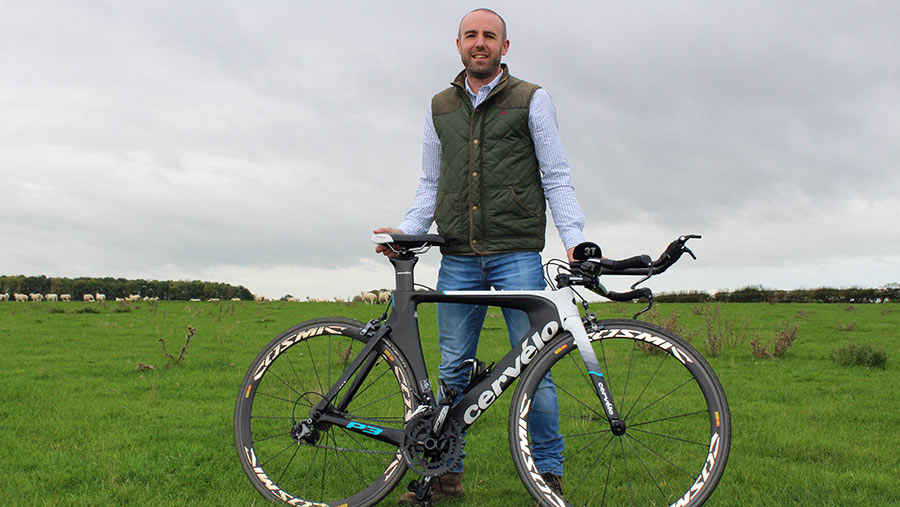 That’s exactly what Lincolnshire farmer and triathlete Adam Madge is up against if he is to achieve his ultimate ambition of competing in a triathlon alongside some of the world’s fittest sportsmen and women.

Farming and sport have been dominant throughout this 34-year-old farmer’s life. From an early age, Adam was a natural-born runner and was partial to the 800m and 1,500m track at school.

This young love affair with athletics manifested itself into a dedication for competing in duathlons, which involves running, cycling and then more running for good measure.

“I’ve always liked watching the sport on TV and running was always my thing,” says Adam.

“I’ve never reached a level that I was happy with in athletics and always felt I had more potential.”

Now he’s heading into his third year competing in triathlons, where competitors must swim, cycle and then run their way to the finish line. To do all that at such a high level of the sport requires some serious commitment without neglecting the farm.

Somehow Adam shoehorns 10 to 15 hours of training each week into his already hectic farming schedule to condition his body and mind for peak physical and mental fitness.

Smashing out four swims, four cycles, four runs and two or three strength and conditioning sessions on a weekly basis is a tall order, so he grabs any opportunity to combine training as he farms.

The pleasant and varied Lincolnshire countryside which envelopes the farm also makes the perfect proving ground for Adam’s cycle training, with a mixture of flat and undulating runs to blast along.

“I do some training while I’m on the farm, pull-ups on the plough, running while checking the crops and of course working with livestock offers plenty of opportunities to keep fit.”

Adam works with his dad on the 182ha tenanted family farm in the village of Stroxton, a few miles south of Grantham.

Together they run a flock of about 400 breeding ewes and 50 Limousin-cross cattle.

On the arable side they grow wheat, oilseed rape, spring barley and spring oats and do some contracting work at harvest.

“I think having a sideline away from the farm is good for you as it can be a lonely life, especially on a farm of this size. It’s just my dad and me here,” he says. 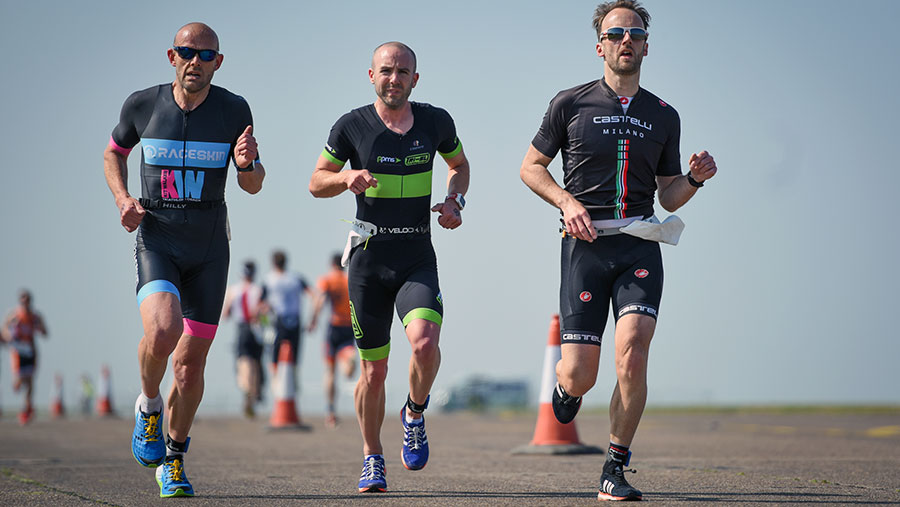 Adam is lucky to be farming with someone like his dad who shares the workload in a way that allows him to devote enough time to his sport.

“Through the summer months and lambing time it is difficult to juggle everything. It means lots of early mornings and late nights,” he admits.

Father and son split shifts in the lambing shed and Adam has been known to bring his bike trainer with him so he can get the odd pedal power session in between his shepherding duties.

Most mornings you’ll find him getting up extra early so that he can get some lengths in at the local pool, a particular struggle when farm work has dragged on late into the previous night.

As with any endurance sport, consistency is critical and working hard year-round has paid off big time for Adam.

Keeping his body fuelled well enough to push hard in training and races adds another layer of complexity to his intense regime. 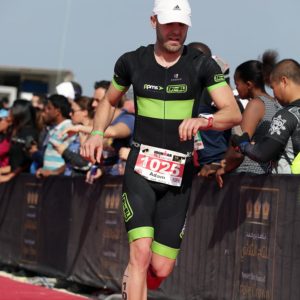 “On a typical weekend of training four hours a day you’ll burn about 4,000 calories, so nutrition is really important.

“Between working on the three sports, the transitions between each one and the nutrition there’s a lot to think about.

In three short years, Adam has worked tirelessly to build himself up to a level where he is regularly qualifying to compete in world races held thousands of miles away from the farm.

Just six months after fixing his sights on the top races, Adam made it to the 2015 World Duathlon Championships in Spain, competing in the group for athletes aged 30-34.

“It was a very daunting experience and very tough to qualify for, but for my first [world championship race] I was reasonably pleased with the 29th place that I achieved.”

Since then he has enjoyed plenty of success on home turf, getting on to the podium at a number of UK triathlon events.

The brand of triathlon he competes in is the Ironman 70.3, also called the Half Ironman. The 70.3 refers to the total race distance in miles, starting with a 1.2-mile swim, transitioning straight into a 56-mile bike ride and finishing with a 13.1-mile run, or a half marathon as it’s more commonly known.

January this year saw Adam pack his swimsuit, trainers and super-light carbon fibre racing bike and head to Dubai to compete in what was his second Half Ironman event.

On race day he hit the water at 6.30am and by midday was running in 37C heat under the sweltering Dubai sun.

“The nerves and adrenalin before you do a big race like this is a feeling that I can’t really explain but I just love it,” he says.

“For me, the bigger the race and the scale of it all, the more I love it. The pride of representing your country is fantastic.” 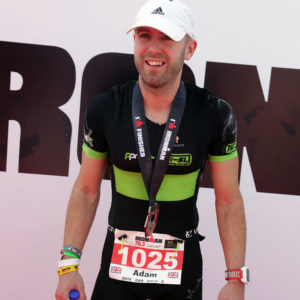 Now in post-season training, he plans to be faster and stronger than ever when he competes in this same event early next year, with a view to qualifying for the 2018 Ironman 70.3 world championships in South Africa.

Asked if he could ever leave the farm to dedicate 100% of his time and energy into the sport, Adam confesses that it’s not a choice he ever wishes to face.

“I love farming – this is the family business. I’ve been told my first word was tractor so a life of farming was always on the cards. It would be a really difficult decision because I love the farm and the sport.

“I think whatever sport you do though, it’s not something that you can do for your whole life [at top level]. You need to have a career afterwards.”

Now his ultimate goal is to compete in a full-length Ironman triathlon, which is double the 70.3 Ironman distances, and then qualify for the world championships in Hawaii.

You can follow Adam on Instagram (@tri_70.3_madge) to keep up with his progress both on and off the farm.

Entering and travelling to competitions all over the world isn’t cheap, so Adam is looking for sponsorship to help him with the costs that come attached to the sport.

You can get in touch by emailing him at adam.madge@live.co.uk.