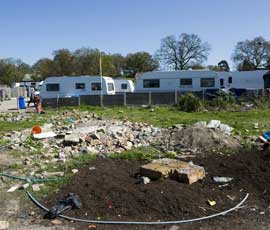 Farmers are being urged to remain vigilant over the extended Diamond Jubilee bank holiday weekend for travellers looking to illegally occupy land.

Agricultural lawyer Kirsten Bridgewater reckons travelling families will be seeking to set up camp on farmland while the courts are closed.

Ms Bridgewater has called on farmers to be on their guard during the Jubilee holiday, which will see court doors closed on Monday 5 June and Tuesday 6 June.

It’s a time, she believes, in which travellers are “almost certain” to take advantage of and trespass on land they do not have authorisation to camp on.

Ms Bridgewater says it’s a known fact among travellers that, unless they volunteer to vacate land, it is costly and time consuming for landowners and farmers to begin eviction proceedings.

Ms Bridgewater, a partner at Midlands law firm MFG Solicitors, said: “For the majority of people, the Diamond Jubilee holiday will be a time to celebrate and take a welcome break.

“But it is also a weekend when all farmers must be on their guard against groups of travellers who are intent on playing by a very different set of rules.

“Specific groups within the travelling community are well aware of the legislation surrounding illegal trespassing. But they are also fully switched on to the fact that when courts are closed, that buys them vital time to remain on land as it takes much effort to evict them, their vehicles and their animals.”

Travellers are aware that the eviction process takes weeks, not days, especially if they take over land during a holiday, she added.

“This is because court dates need to be confirmed and, possibly, a bailiff appointed.

“It’s a frustrating time for farmers, as they are basically powerless until the court process is concluded and the possession date agreed. I am certain no farmer wants to be in that position, so vigilance is vital.”

Ms Bridgewater said more landowners, process servers and local authorities were now working together to accelerate the eviction process and challenge those who wreak havoc across rural communities. “It’s a drive which must continue,” she added.

The NFU said any farmers who find travellers or their animals to be trespassing on their land should act fast and seek prompt legal advice to understand their rights and the correct legal procedures.