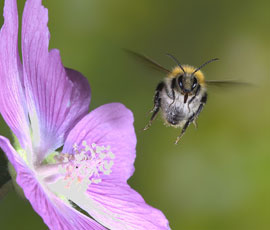 Farmers in Kent have been praised for their work in trying to reintroduce an extinct species of bees into the countryside.

Short-haired bumblebees once thrived across the south of England until they vanished in 1988.

But now, around 100 of the bees have been brought over from Sweden to be reintroduced into our countryside in an effort to seed a new colony.

On Monday (28 May), around 50 queen bumblebees were released at the RSPB’s Dungeness reserve in Kent.

Local farmers have also been involved in the project, which has been funded by Natural England, the RSPB, Hymettus and the Bumblebee Conservation Trust.

Under agri-environment schemes, they have created “corridors” of habitat for bees to forage, linking farmland and nature reserves.

Larry Cooke, an arable and sheep farmer in Romney Marsh, said: ”We need bees and other insects for food production, so it’s vital that we look after them and provide habitats where they can thrive.

“With the support of Environmental Stewardship, we’ve been growing vetches and red clover in two or three flowering phases a year, which supports bees and other insects by providing them with a long season helps them work with us alongside main agricultural production.

“This has not only benefited the insects but other wildlife like brown hare and farmland birds. I know we are giving this new bee population the best possible start here and I look forward to seeing them on the farm.”

Poul Christensen, chair of Natural England, said: “The return of one of Britain’s lost species is a cause for celebration.

“This is a great example of the type of dedicated partnership between farmers, scientists and conservation organisations that can make a real difference for wildlife in this country.”

Bees play a crucial role for farming in pollinating our food crops and in maintaining biodiversity in the rural environment. A recent Friends of the Earth report estimated bees are worth £510m a year to the UK economy.

But conservationists and scientists are concerned about declining bees numbers in the UK due to a loss of habitat – Britain has lost 97% of flowering meadows in the last 60 years.

A report by leading bee experts at Reading University published last week – The Decline of England’s Bees – shows that pesticide use rose by 6.5% between 2005 and 2010.

Some critics have argued that an increase in intensive agriculture methods over the last 30 years, such as spraying crops with pesticides, mechanical ploughing and mechanisation, is to blame for the decline.

But the Crop Protection Association in the UK believes the issues behind the decline are more complex. Its chief executive Dominic Dyer said “most experts agree that the decline in bee populations is down to the Varroa mite and other parasitic diseases, combined with the problems associated with habitat loss, colony stress and climate change”.