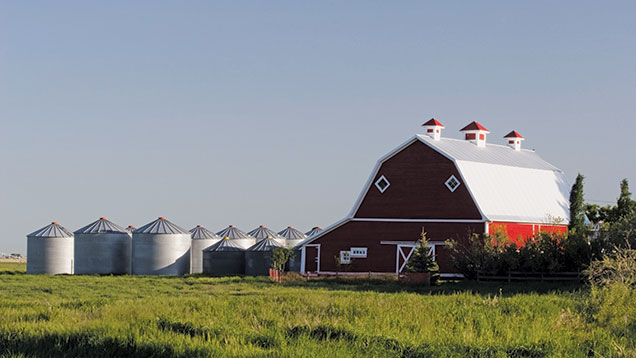 Generations of farmers have seized the opportunity to travel – a spell abroad giving experience of overseas agriculture, broadening their cultural outlook while being a lot of fun.

Sarah Todd talks to people who have seen some of the world with the International Agricultural Exchange Association (IAEA).

Read about the three farmers’ trips below.

“Getting involved with the IAEA again is bringing the world to my farm,” says Anthony, who travelled to Australia with the organisation in 1990.

“Children, livestock – responsibilities – mean I can no longer go out to the world, but the world comes to me.”

Anthony, who returned full-time to the family dairy farm near Pickering in North Yorkshire seven years ago after more than 20 years teaching agriculture at Bishop Burton College in East Yorkshire, is still in contact with his Australian boss from 25 years ago.

“Ever since watching a BBC The World About Us documentary called Yellow Trail from Texas when I was 11 or 12, I’d wanted to take part in a big grain harvest.

“That ambition stayed with me, just simmering in the background, but there was never any spare time, as when I finished my agriculture degree at Newcastle University I immediately landed a job lecturing at Bishop Burton College. The itch didn’t go away, though, and all credit must go to the then-principal at the college, Howard Petch, who gave me a year off and told me to get it out of my system.

“I saw an advert in Farmers Weekly about the International Agricultural Exchange Association and they put me in touch with a local farmer’s son, Graham Bulmer, who had been out to Canada in 1981.

“Graham and I are still friends today and it was that link with somebody who had done it before – I’d never even been on a plane – that turned the dream into a possibility.”

Have you travelled? What was the highlight? How has it shared the way you farm? What’s your advice to others looking to follow in your footsteps? Share your stories with Farmers Weekly by emailing fwfarmlife@rbi.co.uk

Interviews were done and introductions to other people who had travelled with the scheme were made, while the organisation started work on matching Anthony up with the right host family.

“They must have listened to what I said about wanting to drive big machinery, as it was all on the 5,000-acre farm I ended up on – right down to the eight-wheeler tractor I’d been dreaming about since watching that film as a boy,” recalls Anthony.

“It was such an eye-opener compared with our very traditional 200-acre set-up at home. The experience completely changed my life, giving me a different perspective to the small-town one I left home with. It’s left me with a lifelong interest and openness towards new people and situations.

“I arrived in time for harvest; we were combining 100-150 acres a day. I then drilled 1,500 acres by myself in five days. The boss just sent me off in a truck – I’d never driven a lorry before – with a load of seed. Another vivid memory is getting around by trail bike; I’d never even sat on a motorbike before.”

Anthony and his wife Karen are currently “host mum and dad” to Becky Bergen, an 18 year-old Canadian exchange student. She is their fourth student.

“It works for us on many levels,” says Anthony. “I have 200 acres of land rented away from the main farm and it’s a relief to know that if I’m working away there is somebody young and physically fit at home. My parents are both very much still involved, but if a gate falls over or there is an emergency situation, having the student here means they aren’t on their own.

“Then there is the cultural experience for our own three children. Karen and I have both travelled a lot, but as you get older, with more on your plate, getting away from the farm becomes harder. The students bring the wider world to us.”

Student Becky is from Cecil Lake in Canada, where her father runs a beef farm.

“I have a cousin who did IAEA 20 years ago,” explains Becky. “I’ve applied to college to be a veterinary technician and wanted to take a gap year to do some travelling beforehand.

“This scheme offers the security of having a host family – people who care about you – and a network of other people to talk to if something goes wrong. Plus the wider connection of all the students who are over here doing the same thing.”

This is something Anthony vividly remembers. “I flew out with a lot of other agricultural exchange students – there were 80 of us based in and around Victoria – so it wasn’t like landing in a foreign country by myself. I had ready-made friends and there was a different party to go to every weekend.”

Lauren grew up on a 600-acre dairy and sheep farm in Hutton Mulgrave, North Yorkshire. But her trip took her all the way to a family-run farm in the South Island.

She was told nobody ever went to Invercargill because of the “colder, wetter” weather, though the temperature still managed to get up to 30C during the summer.

“Their parlour was a 32-aside swingover herringbone,” recalls 23-year-old Lauren. “They calved once a year through the winter months, grazing on turnip crop fields. I arrived at the farm at the end of October 2012, which was the end of their calving season. I worked 12 days on and three days off.

“My duties included milking twice a day, putting up and taking down electric fences in the fields, as well as moving stock, spraying and weighing calves.”

It wasn’t all work, though, with all the area’s agricultural exchange students having a weekly Wednesday evening out at the pub.

“We would go out to eat at a different restaurant in town,” remembers Lauren. “This was a great weekly event as we could catch up with all of the trainees in our area and discuss who had the weekend off and what activities and places we could do and see.

“The exchange scheme organised two South Island trainee trips throughout my six-month stay in New Zealand. We had a white water rafting day trip one time; another was a mini trainees’ olympics. This was organised by a host family in the Ashburton area and was a hilarious weekend in which we were competing in teams from our areas. It involved circuits of climbing up round bales, rolling tractor tyres, gum boot throwing, crawling through silage sheets and jumping over and under electric fences. This event was on National New Zealand Crate Day, where the challenge is to drink a crate full of beer from your area of New Zealand.”

Lauren got three weeks’ holiday from working on the dairy farm.

“Together with two fellow trainees, I flew to Auckland, where we rented a car and road-tripped around the top half of the island. We partied in Auckland, drove up to Lake Taupo – where we sky-dived from 15,000ft over the lake – and visited the set of Hobbiton from the Lord of the Rings movie. We explored the Waitomo Glowworm caves and made it to Northland at the very top of the North Island.”

Lauren says she grew in confidence during the trip and came away from it with lifelong friends from all over the world.

She has been bitten by the travel bug and was recently in Australia, where she worked in different farming jobs.

“I would do it all over again if I had the opportunity,” she says.

When Hugh Richards arrived in Canada in 1979, there were 320 IAEA students of “all different nationalities” in Alberta alone – with 220 more dotted around the rest of this vast country.

“I was in the Drumheller area of Alberta – known as the Badlands – so hot and dry with plenty of dinosaur remains,” recalls Hugh, who is the new president of the International Agricultural Exchange Association.

Hugh Richards taking a break-during his 1970s trip to Canada

“I have been back and visited several times, most recently to take my children to Canada in 2010 for a holiday.”

Hugh was brought up on a 110-acre dairy farm; a complete contrast to his host’s huge arable holding.

“My host, Gunnar Mortensen, did go out and buy 120 weaner pigs for me to feed every morning as he was worried I would miss livestock! Gunnar has lived a fascinating life, having come over to farm in Canada from Demark on a £10 ticket in 1964.”

While he was out in Canada, Hugh took a three-week holiday with two other students.

“We started at the Calgary Stampede, then drove to Vancouver for the Sea Festival,” he recalls. “We then went up British Columbia and on to the Alaska Highway. This was before it was paved; it was just a gravel road in most places back then.

We travelled on to Fairbanks, Alaska, for their Gold Rush celebrations, as well as back to Edmonton for their Klondike Days celebrations, covering 6,240 miles in 21 days and seeing four major festivals in that time – mostly by luck.”

Hugh went on his travels with four others from Kent Young Farmers; who all ended up in Alberta. The father-of-three, who now farms about 100ha, is hoping his oldest son Laurence, who is studying at Harper Adams University, will follow in his footsteps and arrange a placement with the organisation.

“Gunnar once revealed that when he first picked me up from Olds College – where the incoming trainees met for their orientation seminar – he told his wife I would not last,” laughs Hugh.

“So much for this first impression, as we have been lifelong friends. On reflection, that’s probably at the heart of what I took away from traveling. To look at the bigger picture and not rely on first impressions.”

The International Agricultural Exchange Association (IAEA) is a non-governmental, non-profit membership organisation which has been operating farm work placements since 1965.

About 30,000 young people have been hosted overseas on one of the scheme’s programmes.
It arranges for people between 18 and 30 to travel and work on farms in Australia, New Zealand, Canada, USA, Europe and Japan – taking care of travel detail such as tickets, work permits and insurance.

Supporters of the scheme – who recently voted to move away from a rebranding as AgriVenture – plan to use the golden anniversary to reintroduce farming families to its benefits and encourage former students to get in touch and maybe even become hosts.