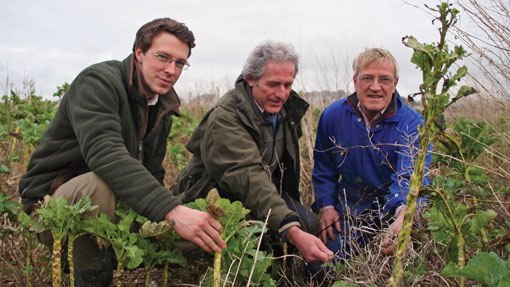 Farmers across Hampshire have been working on practical measures to help farmland birds thrive this winter.

They have been mobilised to provide food and shelter for birds and other wildlife as part of the voluntary Campaign for the Farmed Environment (CFE) scheme.

Around three quarters of farmers in Hampshire take part in green farming schemes and the Horn family are among those who have helped wildlife, putting 8% of the arable land they farm into conservation measures.

“We’re using a lot of modern technology to minimise environmental impacts and we’ve put the awkward corners and less productive areas of the farm into conservation measures,” said Stephen.

“It has helped our business and it is relatively easy to manage. During winter, birds can feed on specially grown seed-rich plots, unharvested cereal strips, uncropped areas and more than 70 acres of overwintered stubbles.

“We have clouds of finches flying out of our wild bird cover and there are countless voles and small mammals which are prey for barn owls.”

Chris added: “I am certain the patchwork of habitats we have is working for wildlife. The farm’s population of brown hare is increasing and we’re delighted the nationally scarce grey partridge has returned – we counted three pairs last summer.

“We also put down seed to help wild birds through ‘the hungry gap’ when natural sources of seeds run out.”

More than 2km of new hedgerow has been planted at Bushey Down and a new 0.8ha (two acres) woodland will be planted next month to add to an existing 4ha (10 acres) of wood.

Hedge cutting is carried out as late as February and finished before the nesting season in March. This maximises the berry crop available to birds including the native song thrush and visiting redwings and fieldfares.

Stephen and Chris have been working with Hampshire CFE coordinator Peter Thompson (pictured right), of Cheriton, who is advising farmers at grassroots level on how they can support the campaign.

“Wildlife is benefiting enormously from the diversity of habitats created around Bushey Down Farm,” said Mr Thompson.

“It clearly demonstrates that modern day farming and wildlife can co-exist. The Horns have cleverly integrated the needs of wildlife into their farming business and take great pride in seeing a wide array of species on the increase once more.”

According to the Farmland Bird Indicator, in 2012, there were 50% fewer farmland birds than in 1970. However, in recent years, some species, including jackdaws and woodpigeons have seen their numbers increase.

Many of the measures that farmers are putting in place can be managed and funded through an Environmental Stewardship agreement.

Some who are not signed up to green farming schemes are doing environmental work voluntarily under the CFE. Visit www.cfeonline.org.uk to find out more about campaign targets, themes and voluntary measures.