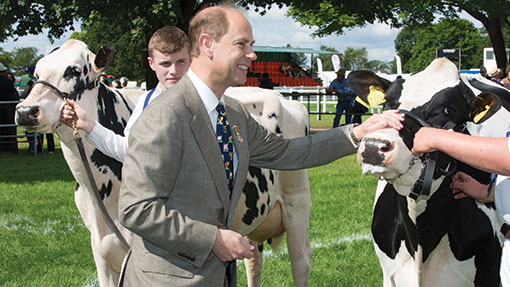 It is not just Farmers Weekly celebrating this year – a host of other organisations and companies are, too. Tim Relf highlights a few.

Young Farmers have been in celebratory mood all year, with many clubs celebrating big milestones in 2014.

Tenbury Wells YFC in Worcestershire celebrated its 70th birthday, with a ball in June, giving members past and present a chance to celebrate in style.

Radnor Valley also hit the 70-year landmark and celebrated its achievement with an on-farm bash, which included dinner, music and speakers.

Meanwhile, sharing Farmers Weekly’s 80th has been Kingsbridge YFC in Devon, which marked the occasion with a summer ball that 400-plus people attended and raised thousands of pounds for charity.

The National Federation of Young Farmers Clubs itself hit its 80th slightly ahead of Farmers Weekly – it had the birthday in 2012 – but as part of the ongoing celebrations a group in Devon recently buried a time capsule in honour of the organisation.

It contained memorabilia donated by 18 clubs from across England and Wales, including photos, programmes, stickers, badges and information. The intention is for future YFC members to dig up the capsule in 2058 so they can find out what life as a young farmer was like in 2014.

Three special shows that went with a bang this year were in Aberdeenshire, Norfolk and Leicestershire.

Billed as the largest two-day show in Scotland, it was described by rural affairs secretary Richard Lochhead as “always an important event in the agricultural calendar – reflecting the significance of agriculture to this part of Scotland”. He dubbed his visit one of the highlights of his year.

Meanwhile, the Royal Norfolk Show notched up 60 years on its current site at Costessey.

This is one of the largest two-day agricultural shows in the UK and, with agriculture fixed firmly at its heart, it attracts about 100,000 visitors a year.

The big day in Leicestershire was 13 July, when the 100th Ashby Show took place.

Once the early morning rain stopped, families turned out in their thousands to enjoy the sunshine.

Adam Henson was a big hit with everyone he met and the young handlers in the cattle and sheep sections were “thrilled” to have him as judge.

To reflect the landmark, exclusive “Golden Jubilee editions” of the T7.270 AutoCommand and T6.160 AutoCommand are being produced.

In addition, all models produced in Basildon in 2014 will feature a special 50th anniversary decal, which recalls the lines of the T6 and T7 tractor ranges.

“The New Holland plant at Basildon has been at the centre of our tractor operations for 50 years,” says Carlo Lambro, brand president of New Holland Agriculture.

The construction of a purpose-built factory for the fully integrated production of tractors began in 1962, and on 15 May 1964, the very first tractors went down the production line.

Since 1964, more than 1.6m tractors and 3.1m engines have been produced at Basildon. Today, the plant employs more than 1,000 people. The facility can accommodate more than 10,000 different product specifications and 85% of total production is exported across the globe.

The Campaign for Wool marked its fifth anniversary with a major celebration of wool at Clarence House, the London home of the campaign’s patron, Prince Charles.

The Campaign for Wool is a global endeavour initiated by Prince Charles to raise awareness among consumers about the unique benefits of wool – the ultimate natural renewable and biodegradable fibre.

The event, hosted by the prince, was a celebration of wool and everything this sustainable material contributes to the great British high street – particularly in fashion and interiors.

The campaign has gone from strength to strength since it began five years ago and this year’s Wool Week – a festival of events and workshops celebrating wool in all its guises – took place between 5 and 12 October.

Keenan has notched up a big milestone, as 2014 is 30 years since it produced its first mixer wagon for a UK customer.

The firm held its anniversary celebration in Ireland in February.