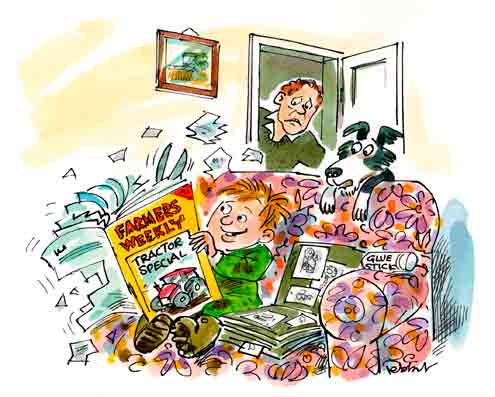 Join us for a funny, irreverent look at some of the characters that make the British countryside what it is. Our tongue-in-cheek guide puts characters such as the retired Major, the “perfect” next-door farmer and the young tearaway under the microscope. Here we meet Freddie– forget Saturday morning cartoons, this five-year-old is only entertained by tractors…


By his fifth birthday, Freddie already had six harvests under his belt (the first one was inside his mum’s tum, but it still counts because he kicked every time they safely dispatched another trailer of grain into the store).

A child with these sort of credentials could only ever be destined for one thing – a career in agriculture.

On his first day of school, Freddie’s teacher asked the class what they wanted to be when they grew up. All the other kids put their hand up and said “astronaut”, “singer” and “football player”. For Freddie the answer was “a farm manager with 100 head of beef cattle.”

It’s not the first time Freddie has noticed a difference between him and his friends. His vocabulary is already expanding in different ways. When his contemporaries say the word “bucket”, they’re referring to what they make sandcastles with on the beach, whereas for him it’s what’s on the front of the tractor.

All of his peers are fascinated by poo, but Freddie’s knowledge of the stuff is already on a different level. Chicken poo smells more pongy, but is better for the crops. Cow poo is called slurry. That’s wet and you can splash around in it in your wellies.

Mud isn’t just mud. The different types already feel different when he rubs it in his tiny pale hands. Soil, he has this instinctive sense, will come play a very important part in his life.

When the teacher asked the pupils to make drawings of their pets, the display board was full of rabbits, hamsters and goldfish. Freddie’s picture had 60 Simmental cross cattle and the orphan lamb he’s been bottle-feeding for the past two weeks. (Freddie couldn’t work out why on earth someone would want to keep a rabbit anyway – Dad always shoots them as most of the crops are over-run with them).

But animals aside, it’s the farm machinery that really gets Freddie’s pulse racing. Show him a roaring hulk of metal on four wheels and it’ll make him more hyperactive than all the E-numbers in a can of fizzy drink ever could.

But animals aside, it’s the farm machinery that really gets Freddie’s pulse racing. Show him a roaring hulk of metal on four wheels and it’ll make him more hyperactive than all the E-numbers in a can of fizzy drink ever could.

If a tractor ever trundles past the school gates at lunchtime, Freddie will drop everything, race across the playground and press his face up against the metal railings in the hope of catching a glimpse. He’ll stare, transfixed, until the very last millimeter of the back wheel has disappeared around the corner – the exact make and model firmly etched onto his mind for the rest of the day.

Freddie’s most prized possession has to be his tractor scrapbook. Whenever Dad goes to the local dealer he picks up a few copies of the latest brochure and Freddie spends hours at the kitchen table cutting and sticking his favourite kit into the book. The angriest Freddie has ever seen his Dad is when he did the same thing to the freshly delivered copy of Farmers Weekly.

But despite the odd telling off, Freddie is definitely his father’s son and wherever Dad goes, Freddie is never far behind. When Dad is out in the combine, Freddie is in the yard dutifully harvesting imaginary wheat. When Dad goes out to feed the sheep, Freddie is bottle feeding the pet lamb. When Dad is power washing the Land Rover, Freddie is sprucing up the wheels of his ride-on tractor with his own little bucket of soapy water and sponge.

If his Mum would let him, Freddie would sleep in his John Deere overalls (exactly like Dad’s, just smaller) but after bath-time she makes him put on his pyjamas and it’s straight into bed.

There’s time for a quick story before lights out, but Freddie’s very fussy about his reading material. Peppa Pig doesn’t get a look in. “Why’s the pig talking mum? Pigs don’t talk.”

The Very Hungry Caterpillar didn’t go down well either. “Why doesn’t the farmer go spraying, to stop the caterpillar eating everything?”

Tractor Ted usually hits the spot, and after a few chapters of balers, trailers and quads his head finally hits the pillow. And what does he dream about? That big, noisy tractor he saw through the school gates of course