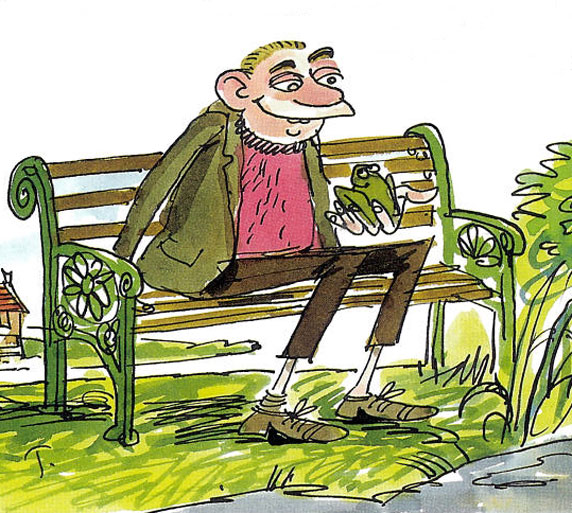 Join us for a funny, irreverent look at some of the characters that make the British countryside what it is. Our tongue-in-cheek guide puts characters such as the retired Major, the “perfect” next-door farmer and the young tearaway under the microscope. Here we meet the real character of the village, Frogman, who likes to sit by the pond at the same time every day…

You’ll see him sitting by the pond between 7am and 3pm every day. You could set your watch by him. Seven days a week, 365 days a year, rain or shine, he’ll be on that bench, staring inanely ahead.

He got his nickname because he catches frogs and cradles them in his hands. Everyone knows him simply as Frogman (except the vicar, who rather jarringly, still calls him Terry).

Frogman still lives in the cottage in which he was born. He plays records late into the night. The sound of nature programmes is often to be heard coming from his telly. He dug a hole in the garden once and tried filling it with saucepans of water – but all the water drained away. All that’s left now is a man-size hole. “A torture chamber,” the village kids say.

His next-door neighbours worry he’s devaluing property prices. People, who live further away, however, reckon he’s exactly the sort of “character” that every village needs.

Sometimes he crouches at the pond’s edge. He doesn’t feel water around his ankles. He catches the frogs – catches them and strokes them.

“Dearest frogs,” he whispers in a tone most people reserve for the bedroom. One or two of them he calls by name.

Frogman still lives in the cottage in which he was born. He plays records late into the night. The sound of nature programmes is often to be heard coming from his telly.

Frogman was once reduced to tears when he discovered a frog’s squashed corpse in the road. He took the remains home, put it in a shoebox and buried it in the garden. He buried it that evening, as darkness was failing, and said a few words as he did so. The little girl next door watched the ceremony from her window. She saw Frogman, dressed in a black jacket, and ran, crying to tell her mum. That family moved shortly afterwards.

Frogman is known to both the local police and the social services. “Harmless” is the word they used to describe him. “What do you expect us to do,” the bobby once said, smirking, to a new arrival in the village, “frog-march him down to the police station?”

Frogman’s father was a cowman and his mother worked as a cleaner at the manor house. The “more-than-a-passing” resemblance he bears to the lord of the manor has been mentioned on more than one occasion. “Ever wonder where he gets his money from?” the local gossips comment.

He never works, that’s for sure. “He can’t be that much of an idiot,” some people say, “he’s never done a day’s work in his life.”

And it’s true – he’s got clothes, eats every day and seems to have a pretty nice life, sitting outside by the pond (except, of course, when it rains).

“Froggie,” the children yell when they see him – then run, fearing for their lives. Under his clothes, apparently, are scales. He can jump – no, spring – three times his body length. Rumour has it, he actually turns into a frog at nightfall.

“Have you seen his tongue,” the kids whisper, “it’s long and sticky. He catches flies with it.”

Frogman ignores them. There’s no point even trying talking to most people. It’s frogs that understand him best.