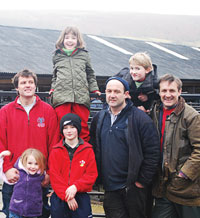 A happy extended family life underpins the success of a Welsh livestock farming business that primarily focuses on quality. It’s the benchmark by which the Havard family lives, farms and markets their suckled calves, prime lamb and Brecknock Hill Cheviot tups.

The three brothers and their young families, with their elderly parents, farm more than a thousand acres, mostly in the Brecon Beacons National Park. They live within five miles of one another and all within three miles of the market and army village of Sennybridge, where they are heavily involved in cultural, sporting and other community activities.

Gethin, in his early 50s, is the eldest and, as vice-chairman of the British Wool Marketing Board, the best known. An original thinker, he’s a natural leader, but, chatting around the kitchen table, it’s clear that he and his brothers, Huw and Howell, share responsibility and enjoy different strengths.

They are each convinced of the importance of marketing, of gearing their business to the needs of the consumer and pointing up the virtues of food produced in the Brecon Beacons. They are dedicated to concentrating on – and flagging up – what they are best at. They haven’t diversified, although outside interest is provided by New Zealand Huntaway and Welsh sheepdog breeding, Welsh Cobs and rugby coaching.

Gethin agrees: “We tend to do what we know best.”

Their parents are still actively involved. Howell senior, although recovering from a knee replacement operation, is still a driving force whose view isn’t to be lightly dismissed. Their mother, Moy, does the banking, pays the bills and is always on hand to care for the grandchildren.

The three wives have careers off the farm and their incomes are vital to the family finances, something the brothers feel that, with 2500 sheep and 150 suckler cows, is a sad reflection of the state of farming. 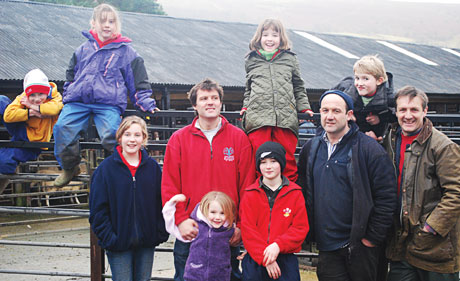 Gethin’s wife, Ceri, works with TWF, a Welsh Assembly government initiative promoting the advantages of bilingualism. Huw’s wife Carolyn is a tax official and Howell’s wife Tracey is a primary school teacher. “It would be nice to have the girls at home,” says Howell ruefully. “The houses are empty much of the day and it’s not like the old days when people would call and be welcomed.”

Gethin worries that for many farm women their only time off from paid work has to be devoted to helping on the farm at peak periods such as harvest and lambing. But Tracey, Howell’s wife, lends a different perspective. Her in-laws, she says, are very supportive and she feels that each of the wives having a different role outside the farm helps them to get on well.

“We help out when we’re needed and give our support, but we do have to go out to work,” she says. “But then if I didn’t it could be a very lonely life and you could get ground down.”

The family cherishes its Welsh language tradition and is proud that until the eldest, 11-year-old Elin, progressed to a Welsh medium comprehensive the cousins made up almost a third of the pupils in the Welsh stream at the village school.

The seven children happily pop in and out of one another’s homes. But while the ties that bind are close and caring they are not to be taken for granted.

“There are times of the year when we keep a reasonable distance,” says Gethin. “But that’s usually harvest time when we’re trying to do about a month’s work in a couple of days and we have different ideas as to what the priorities ought to be. Then we tend to just keep a sensible distance.”

Howell stresses the importance of their different strengths: “We’re very fortunate that we’ve got different interests. Huw enjoys the cattle and the tractors and I can’t abide tractors. I enjoy sheep, so we’re basically heading in different directions most days anyway so it’s just a natural procedure. Even as kids we didn’t fight, not even play fighting.”

“We draw £540 a month for the basics, food and clothing and a little bit on socialising,” says Gethin. “The rest we put back into the business.

“I think it’s true to say that if it wasn’t for the single farm payment we’d have made very little money out of anything over the past four or five years. It’s been horrendous ever since the day in 1996 that British beef was banned from foreign markets because of BSE.

“This is where the benefits of two or three of you in a business come in. I honestly think that if I was by myself I would probably have abandoned the cattle then. But when there are three, you have different ideas and there might be just one of you that’s enthusiastic.”

There is concern over the troubles afflicting the wider population after the tribulations of their own 12-year credit crunch which “no one outside commented on”. And with Havards having at different times occupied almost every farm in the Senni Valley for 500 years, they are acutely conscious of the sacrifices made by previous generations.

They sense now that the rewards are beginning to come through. The feeling is that at last consumers value home-produced food and recognise that red meat production is finite, with costs that include the landscape and environment.

Huw is relieved that, with the lifting of prices, his confidence in beef production has at last been rewarded. The herd of Limousin cross suckler cows has increased from just under 100 to 150. They are mainly put to a Charolais bull.

The calves are sold at between five and 10 months in April and October, some in the Sennybridge sales and some in the Brecon and Radnor Suckled Calf Rearers Association autumn sales. As chairman of the association for 17 years, Gethin is proud of the impact it has had throughout the UK and also on the family’s own business.

“It raises standards,” he says. “It attracts the very best and then you set out to match or better that standard, if possible. We source top-flight Charolais bulls. It’s all about satisfying the customer at the end of the day.

“Selling to him once is useful, but it’s not as important as having him come back year in year out, and things have changed in the past 10 years, in particular since BSE. The remaining finishers are extremely switched on, otherwise they wouldn’t still be in business. They can relate to every animal they buy and they will buy the following year accordingly.”

Huw brings the cattle in at the end of October or beginning of November and has just started mixing the straw in with the silage, using a Keenan, to ease calving and reduce costs. They’re confident that their milky cows will give them a good start and after 12 weeks on cake before sale, next year’s calves will match if not better the prices achieved this year.

A bunch of 12 of their best calves averaged 257p/kg at five months and at 240kg made £630. Another 15 bullocks at six months weighed 290kg and made £670, an increase of about £130 on the previous year. The barren cow prices have trebled since they were allowed back into the food chain and are now up to about £700.

The family’s cautious optimism and relief at having stuck it out is tinged with anxiety. Gethin Havard is convinced that there are wonderful times ahead for food production and for beef, in particular, but TB is just three miles away.

“We wouldn’t want to see the badger disappear,” he says. “But it does annoy me that we can’t afford to switch the light on outside my parents’ house in the village, but we can afford to spend millions testing and destroying animals for the sake of preserving a wildlife population that is completely out of control.”

The farm’s lambs are sold in both Marks and Spencer and Waitrose. There are 800 lowland cross ewes, including 40 Inverdale, and the rest are Brecknock Hill Cheviots kept for grazing in the Great Forest of Brecknock and to produce the White Faced Mule.

Gethin says the time he spends as vice-chairman of the British Wool Marketing Board is justified because he feels both that wool will again be valued for insulating and other properties and because the board provides an excellent marketing template without which he feels much British wool might well incur a disposal charge.

“I don’t have to persuade dairy farmers of the virtues of the Wool Marketing Board,” he says.

“I’m adamant that it’s the most effective marketing mechanism we have for any product related to agriculture.”

Then, as the last of the winter daylight begins to fade, the brothers are suddenly up and out – seizing the chance to round up the last of this year’s lamb crop.

The weakness of the pound against the euro means the Mediterranean market for light lamb has reopened. They’re not ones to miss an opportunity.