We love a good farming flashback and our fantastic readers have been sending in more old farming photos for us to share and enjoy.

The response to this regular feature never fails to astonish us, so keep venturing into the loft, digging around in your cupboards and searching through those old boxes full of stuff you had forgotten about.

You never know what you might find, so please keep sending us copies of your old photos.

Harry Sansome (pictured front row, centre) was Geoff’s grandfather. He fought in the Battle of Gallipoli in the First World War and then took on the farm at the end of the war.

This harvest-time photo was taken in Claines around the turn of the 20th century. That’s one seriously tall ladder – we wonder what the HSE inspector would have thought about this. 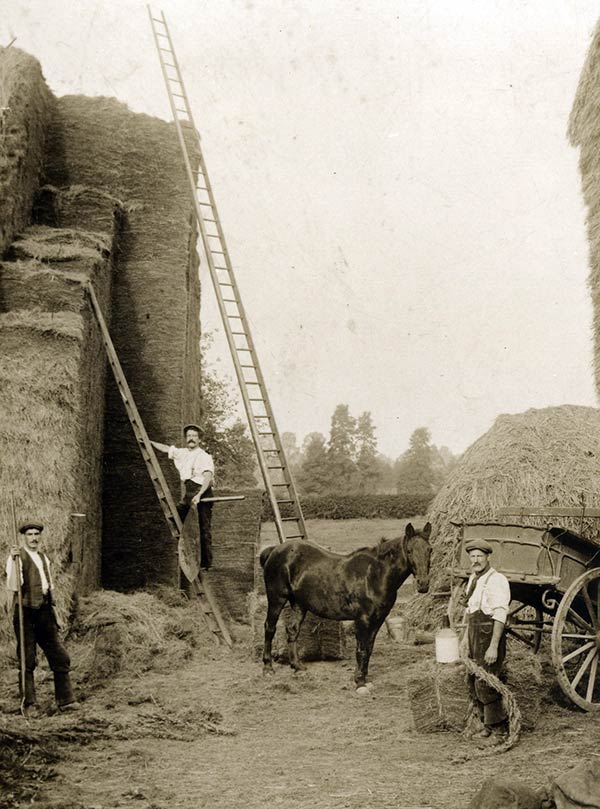 These wonderful photos are taken from “The Diary of a Claines Farmer – 1883”, which gives a factual account of the daily life of Isaac John Sansome and the lengths he goes to in order to make a sustainable income following the death of his wife.

The diary gives a fascinating insight into Isaac’s daily routine, social life and wellbeing, as he deals with the challenges that many family farmers are dealing with today.

Great-grandson Geoff, who is head of agriculture at Natural England and a volunteer with the Farming Community Network (FCN), transcribed, researched and published Isaac’s diary himself.

“The fascination of the diary is in the detail – every penny is accounted for and Isaac also relied heavily on goodwill, barter and lending to and from his numerous farming friends,” says Geoff.

“It gives a great glimpse into the social fabric of Victorian times and the tenacity of Isaac as a tenant farmer as he struggled to make a living.”

The diary is available to buy via the diary’s website and for every copy sold, £3.50 will be donated to FCN.

David and Maureen Kelsey sent in this photograph of David’s father sitting on the back of a prize-winning steer when he was about five years old – they think it was taken in 1906.

The steer was bought from King Edward VII’s estate in Sandringham by David’s grandfather, a well-known farmer from Bexley in Kent, and is being held in this photo by his stockman. 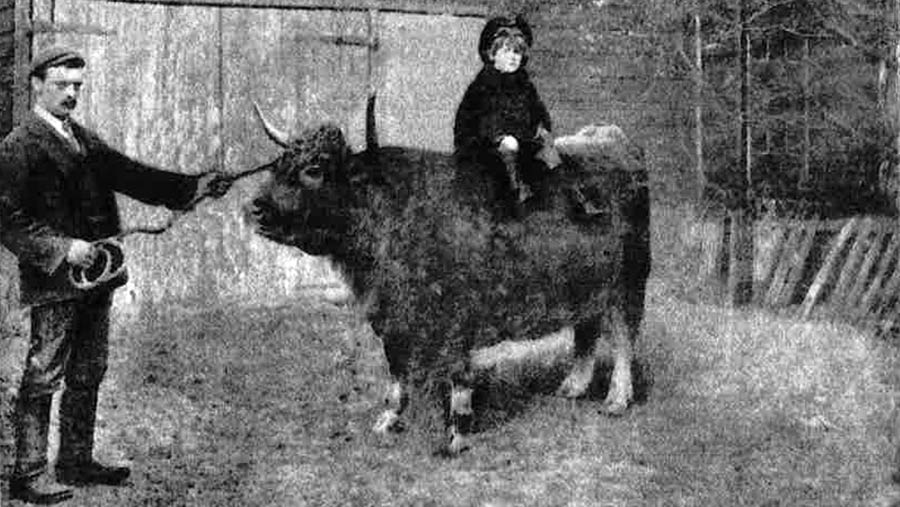 David’s grandfather also had a butcher’s shop in Bexley high street, photographed here with many prize carcasses hanging outside to entice the Christmas shoppers. 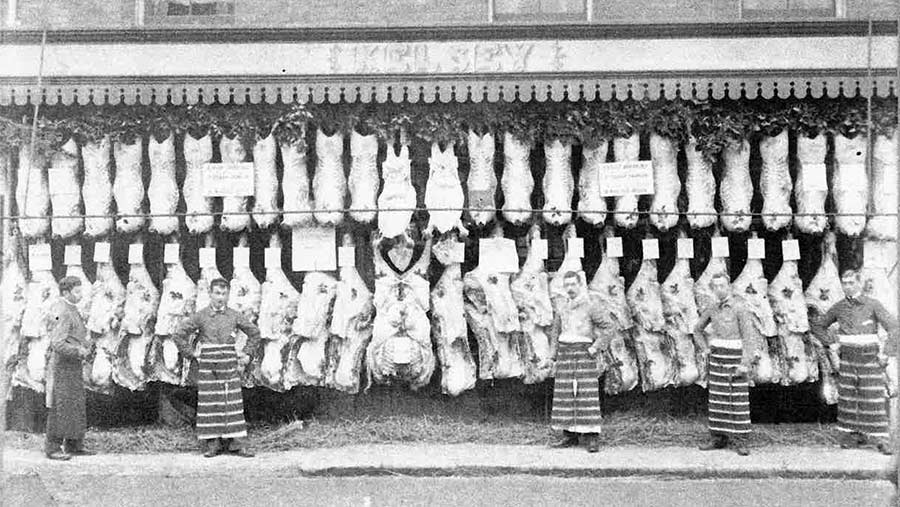 Here’s Donald Ward cutting a field of wheat in August 1947 in Withcote, Leicestershire. He remarks that in more than 70 years of farming, he has never seen the wildlife population so low.

He blames the protection of birds of prey, badgers and other vermin for the decline in wildlife. 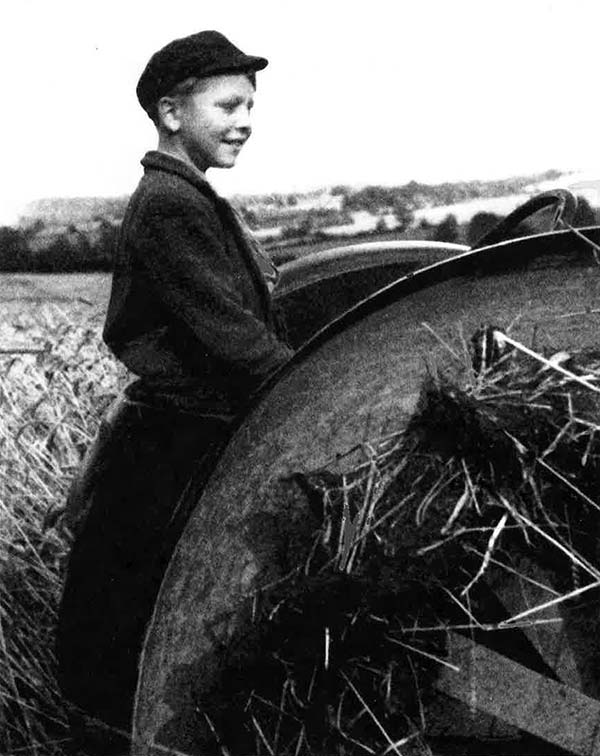 This photo was taken at Rabbit Hill Farm in Sutterton, Lincolnshire, in 1947, and was sent in by Chris Clock. It shows workers and bosses from three local tenanted farms – Rabbit Hill Farm, Westhorpe Farm and Beech Tree Farm. 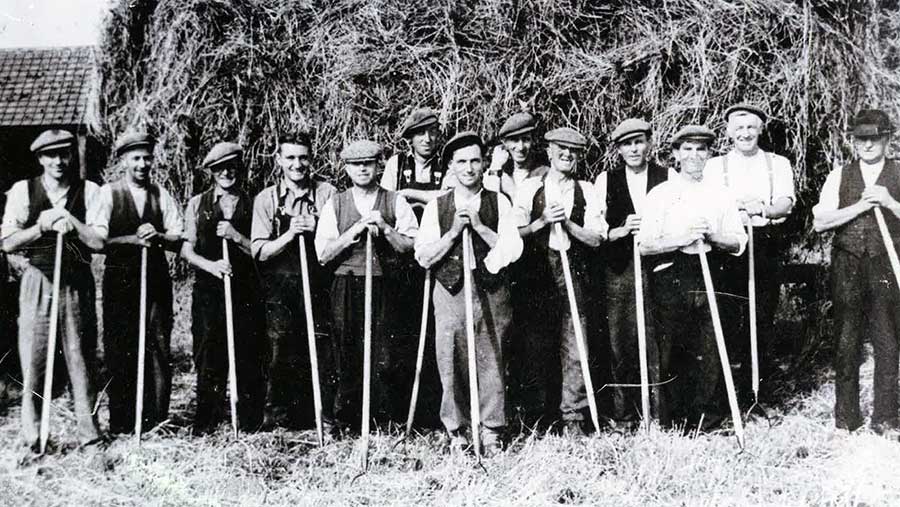 Chris’s father bought Beech Tree Farm in the late 1950s and it is still farmed by his son, John, with a little help from Chris, who is now 76 years old. 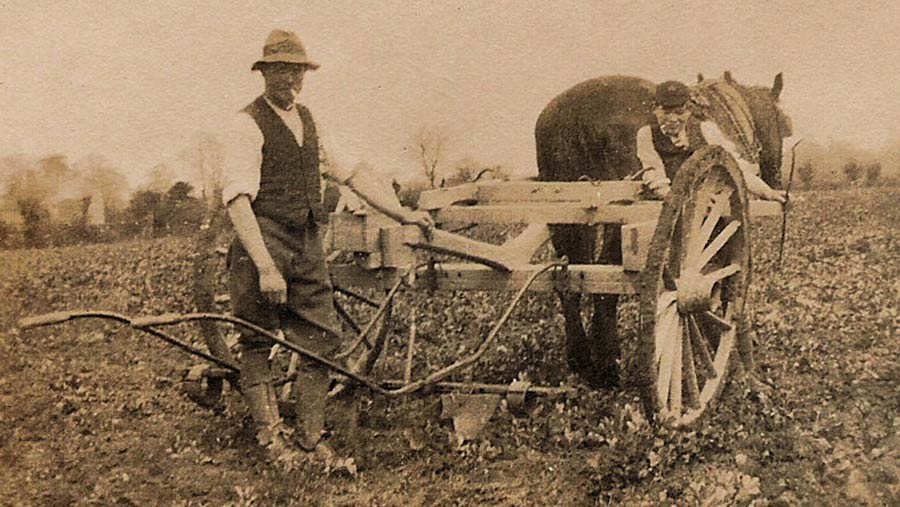 These photos were taken at Otley Hall Farm, Otley, Suffolk, in the 1930s, and were sent in to us by Stephen Ling. 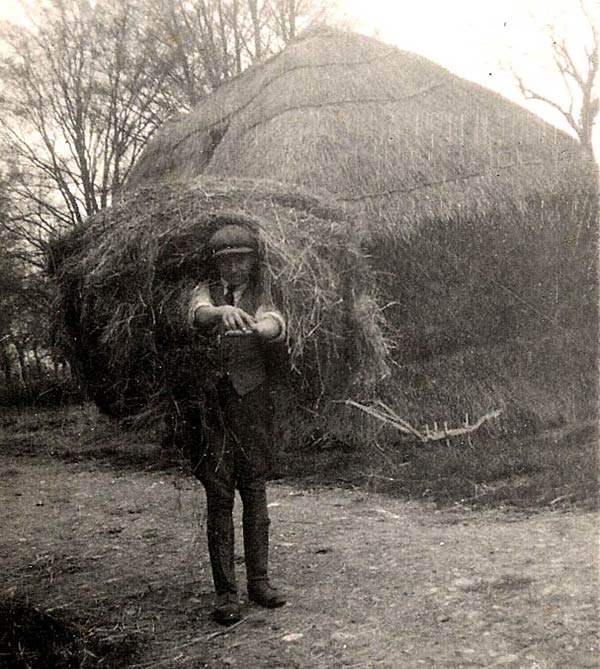 Stephen also shared a photo of the last journey of his grandfather, William Ling, being transported to his funeral in 1945. 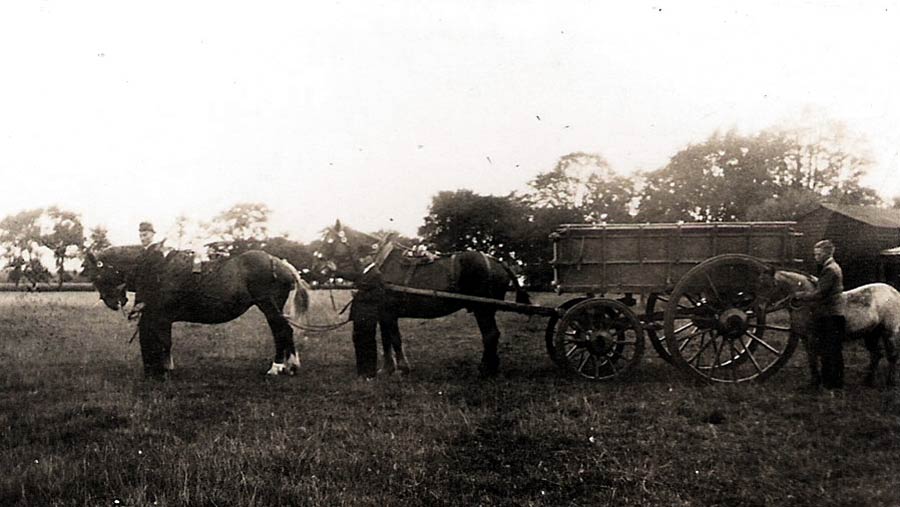 “The same wagon was used for the funeral of his father, Samuel, in 1896 and again in 2006, after a few repairs, to carry my father’s ashes to Otley churchyard – exactly 110 years after his grandfather’s funeral,” says Stephen.

Here’s a snapshot of threshing under way at Blagrove Farm in Glastonbury, Somerset, taken in 1921.

This photo was shared by Stephen Adams from Rhode Farm in Bridgwater, Somerset, and shows people hard at work on the tenanted farm of Alfred Adams – Stephen’s great-grandfather. 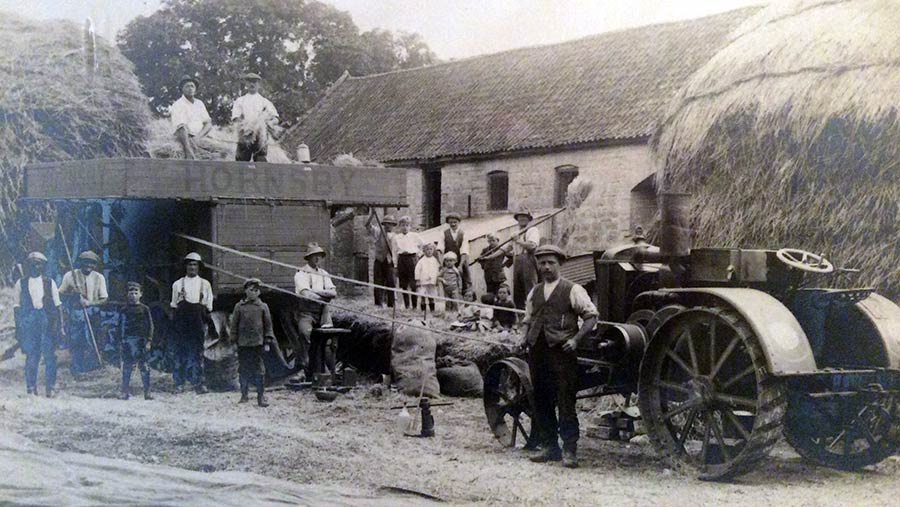 Among the team in this picture are Stephen’s grandfather, Stanley Adams (with a pitchfork over left shoulder), and his brothers Lesley (folded arms behind sack weigher) and Wesley (on top of thresher on the right).

“There are two people in this picture who are still alive,” explains Stephen. “There’s my 98-year-old father, Wesley Adams of Rhode Farm, Bridgwater (the middle one of three children sat down) and his sister, Rene Bennett of Troakes Farm, Enmore, Bridgwater (sat to the left of him), who is 101 years old.” 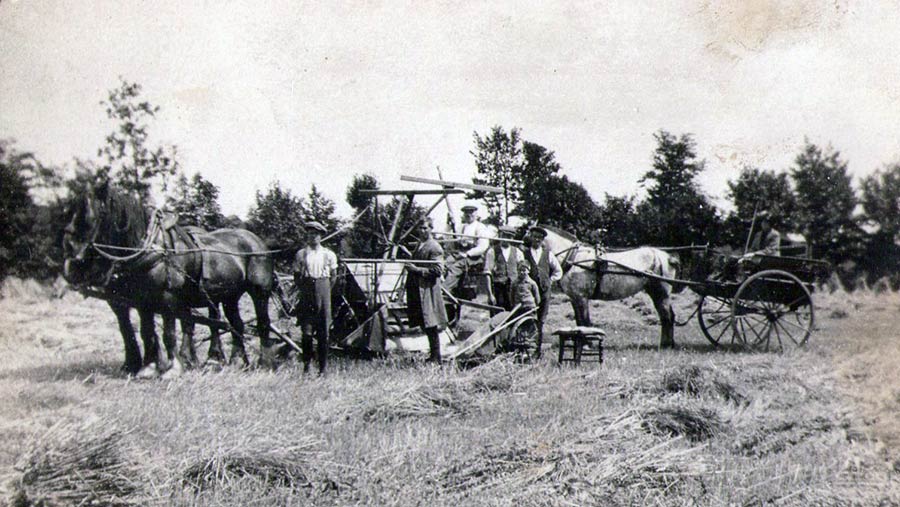 Her grandfather, Edward Turner, is the one holding the gun. Her father, Dennis, is the young boy sat on the binder and her grandmother, Edith, is bring them tea with the horse and trap. The family still are farming the same farm today.

“It is farmed by my brother, Edward, and his son, Mark,” says Rosemary. “Mark has a son, Ben, who is 14 and is also a keen farmer, so it looks as if the generations are going to carry it on.”

We’d like to see photos of your farming forebears – they could appear in the pages of Farmers Weekly.

If you already have a digital image, email us a copy and if you have a print, you can either take a scan or take a photo of it with your phone or camera and email it to us.

Don’t worry if you’re not an expert with a camera – snaps are fine. Email it to fwfarmlife@rbi.co.uk and your photo could appear in Farmers Weekly.