Thanks to everyone who’s been sending us photos of their farming forebears.

The response was superb after we asked to see snapshots of your relatives – both those who are still around and those who are no longer with us.

We’d love to see more, so it would be wonderful if you wanted to look through your archives and share yours – it might be a close relative (a parent or aunty, for example) or someone slightly more distant and going back further in time (a grandparent or great-grandparent, perhaps).

See also: Farming Forbears – ‘My mum is a wonderful lady’

All we need is a photo and a line or two (feel free to write more if you’d like to) about whoever’s in the picture.

Here are some of the ones we’ve received so far.

From Joan Jacob: ‘My husband David’ 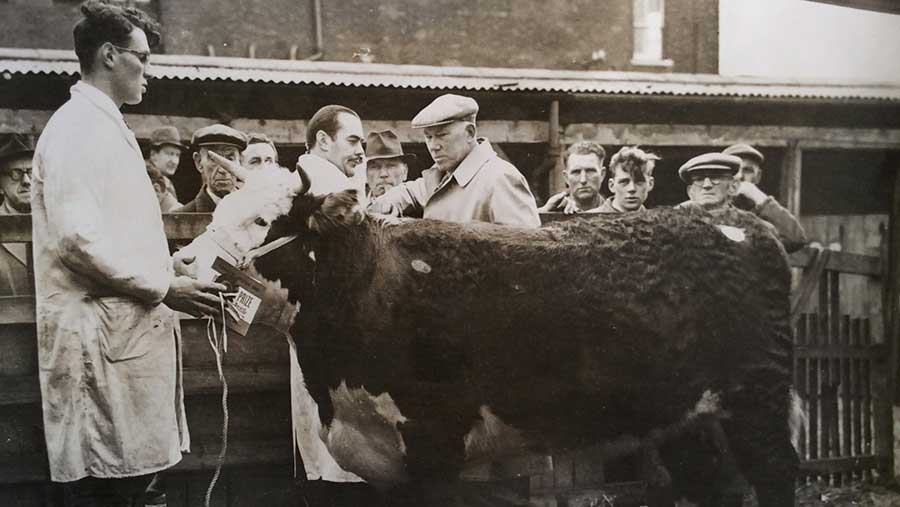 “This is a picture of my husband, David Jacob, when he was a boy of about 16, winning the Christmas Fatstock Show in Basingstoke, Hampshire,” says Joan Jacob.

“He will be 80 in October. He farmed with his father, Eric, on the Wellington Estate at Turgis Court near Basingstoke. We have lived in Wales near Llandysul since 1972.”

From Sue Stenett: ‘Mum and Dad, Joan and Bill’ 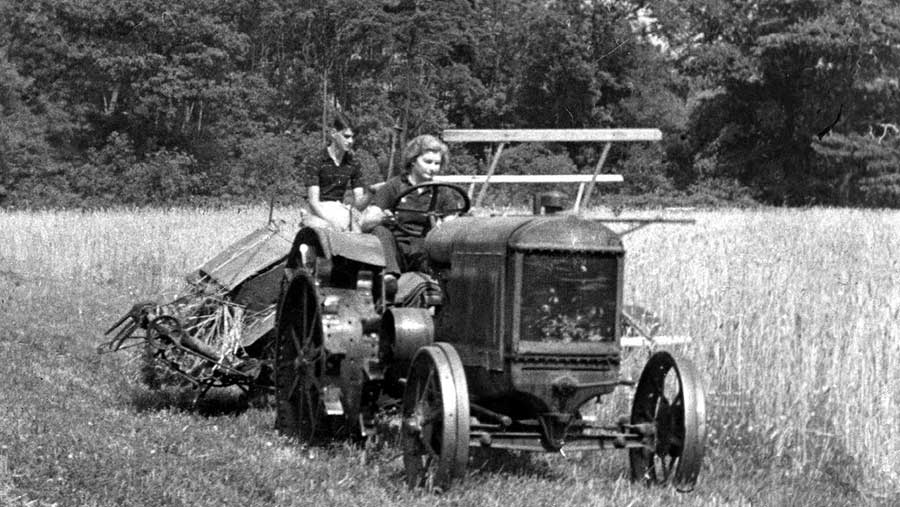 In the summer of 1940, the young woman in this picture (top, driving the tractor) – Joan Peake – volunteered for war work for the summer holidays between finishing her three-year teaching course at Bedford PE College, and taking up her first post at Howells School for Girls in Denbeigh, North Wales.

She had come home to Lincoln, and was sent to a farm just north of the city. There she met the young man on the binder, Bill Wells-Cole, who was a farm pupil, and waiting to be called up.

She worked for the full six months and, on the last day, the boss said: “We want you to come and see us tomorrow, we have something for you.”

She biked the four-and-a-half miles to South Carlton to be given a jar of jam for her six weeks’ work. 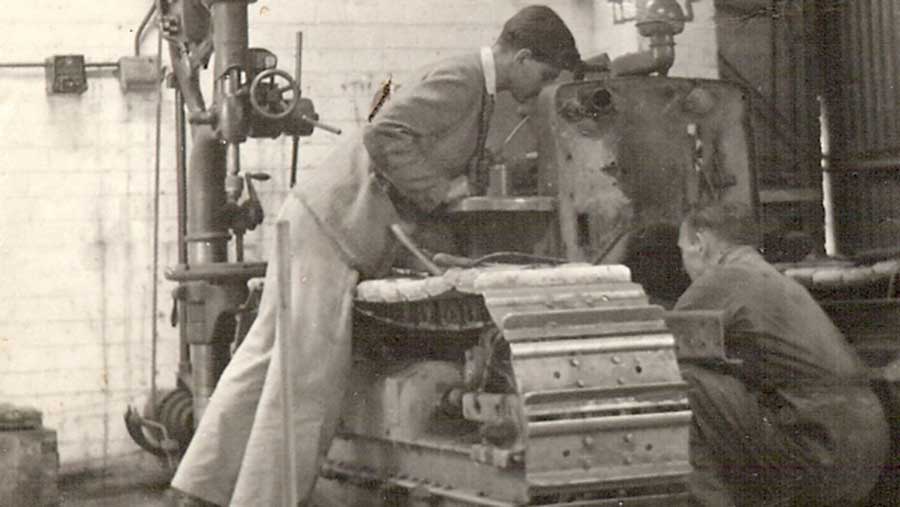 However, she had met her future husband – although the war meant they would not be married for another year, during a 36-hour leave.

After demob in 1946, Bill went to Moulton College of Agriculture and Joan swapped giving keep fit lessons to the pupils for a poultry management course.

This story is recounted by Sue Stennett, who adds: “These were to be my parents and they went on to run a tenant farm for the rest of their working lives.” The picture (above, lower) shows Bill at a machinery practical lesson. 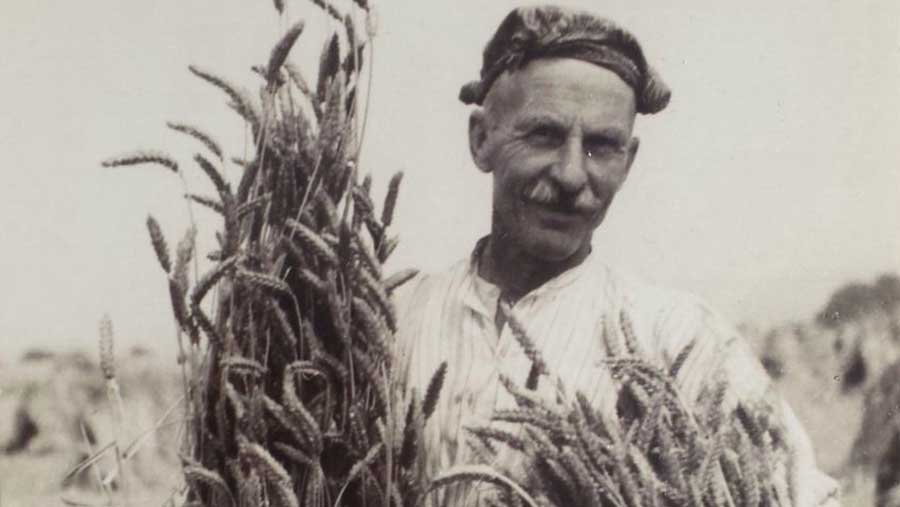 Michael Amos of Sittingbourne in Kent shared the image of his grandfather, Tom Amos, who was born in 1876.

“He worked for Mr Mercer in Teynham, Kent,” says Michael.

“Over the years, he worked as a shepherd, shearer and hop-dryer on various farms in Kent. He eventually became a foreman in Egerton near Ashford. On his retirement he moved a few miles south, to Biddenden, and grew strawberries and kept chickens.”

From Richard Thornton: ‘my uncle Lesley’ 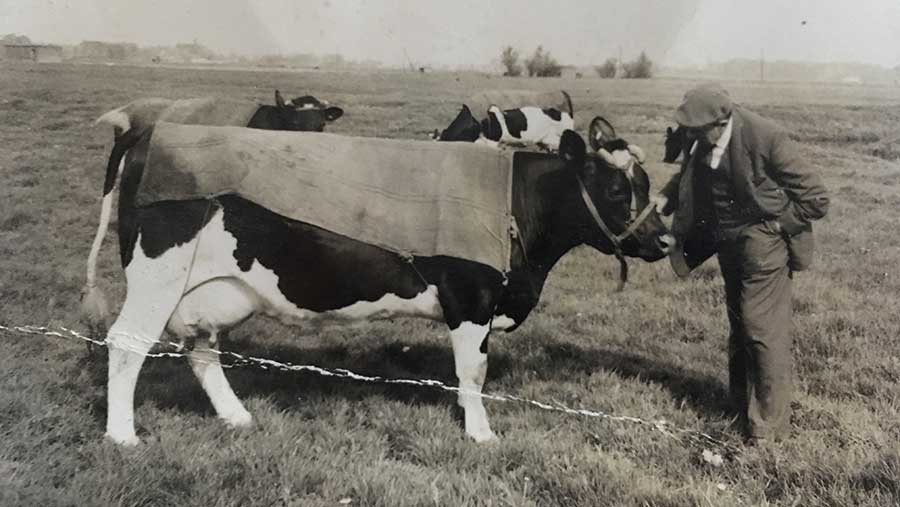 This is Lesley Rowland, formerly of Romford in Essex. Richard Thornton, a beef farmer from Diss in Norfolk, sent us the picture of his uncle, taken in the 1940s. He says the milk went to London and the beef and pigs went to a butchers in Ilford.

From Olive Hagues: my dad Walter and sister Cynthia 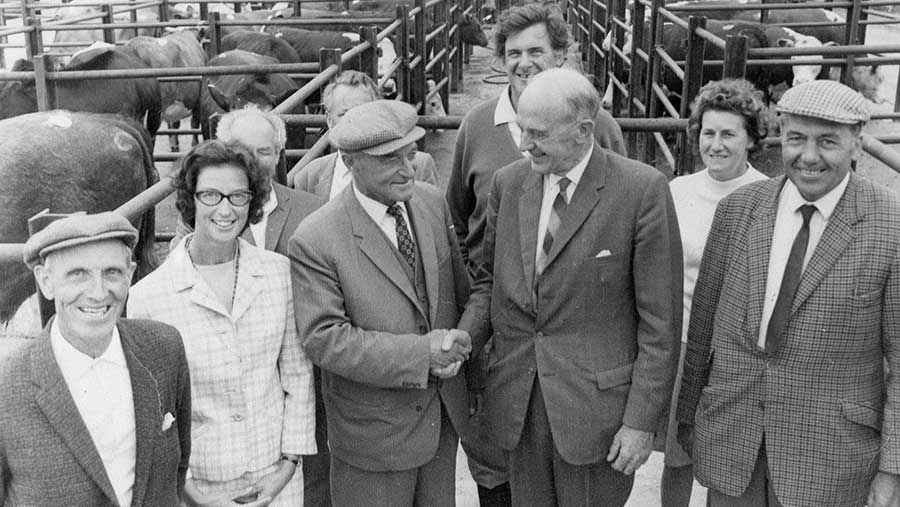 Hailsham Market – probably in the 1950s – was the venue shown, says Olive Hagues. “I think it is of a feed rep receiving an award,” she says. It shows (from left) her dad Walter Frizzell; her sister Cynthia; and several local farmers. “Can someone out there fill in the gaps?” she wonders. “Most finished cattle were Sussex or Hereford, marked with a C or an X for grading purposes,” she adds.

From Janet Wilsher: ‘my father-in-law Colin’ 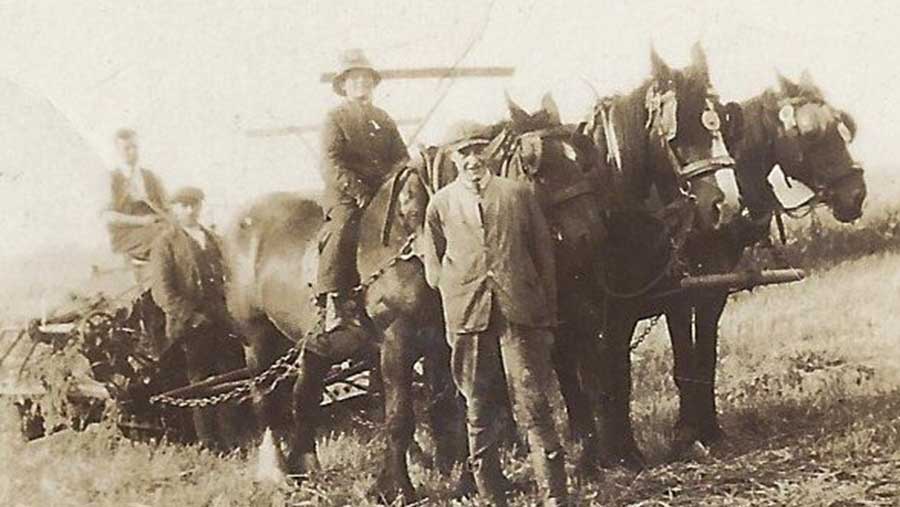 The lad standing at the front is my father-in-law, Colin Wilsher, who was born in 1927, says Janet Wilsher.

“Colin grew up on his grandad’s farm in Kirkhamgate near Wakefield, but after his grandad’s death, the farm was passed to his uncles.

“On his 21st birthday, he inherited some money from his grandad’s estate and bought a milk round. He married Joyce, a farmer’s daughter, but once again the farm was inherited by the male line. Over the years Colin started to buy land around Kirkhamgate and together with his son, Graham, they built up a farm from scratch and we now own 135 acres [54.6ha] and a herd of beef cattle.

“Graham and I have two children, Gillian who is a qualified rural surveyor and acts as our land agent, and Joe who at 18 is at Askham Bryan Agricultural College and hopes to take over the running of the farm one day.

“None of that would have been possible without the hard work and determination of the lad at the front of this photo. Colin died in 2008. He’s gone but not forgotten.”

From Juliet Cleave: ‘my father Henry, grandfather, and father-in-law Tom’

Juliet Cleave from St Teath in Cornwall sent us the picture of her late father, Henry Tom, as a lad in the mid- or late 1930s with a shooting dog, Devon cattle and a stockman.

The buildings in the distance at the top left are where she and her husband Chris now live and farm Devon cattle, having re-established the Kew Herd in the late 1990s. 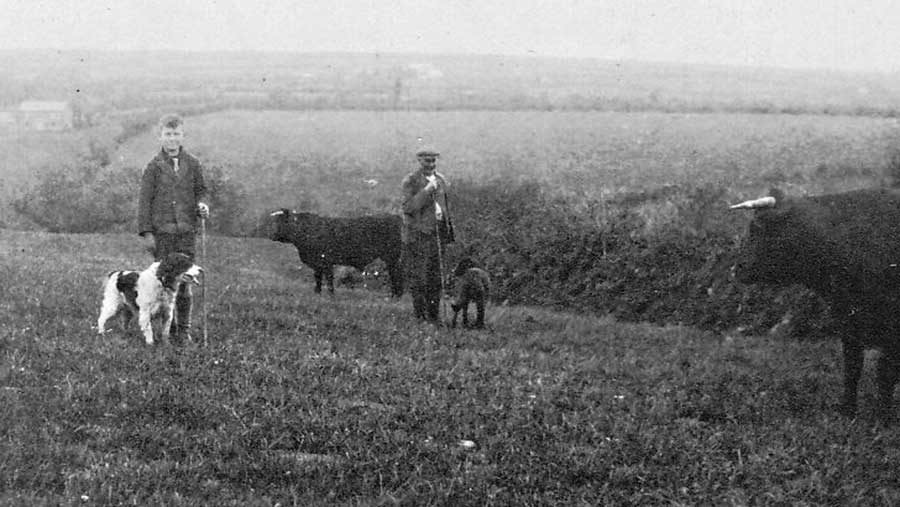 This picture shows Juliet’s father as a small boy in the mid-1920s with his father, and a Devon calf. 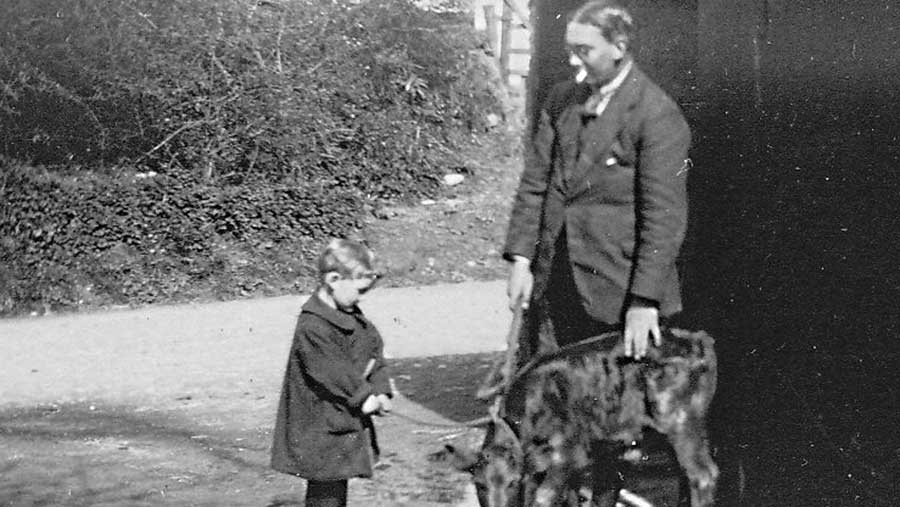 The picture below shows Tom Cleave, Chris’s late father, pictured on the farm horse (presumably about to gather sheep) taken on the cliff farm Chris grew up on, just a couple of holdings away from where Juliet now lives. 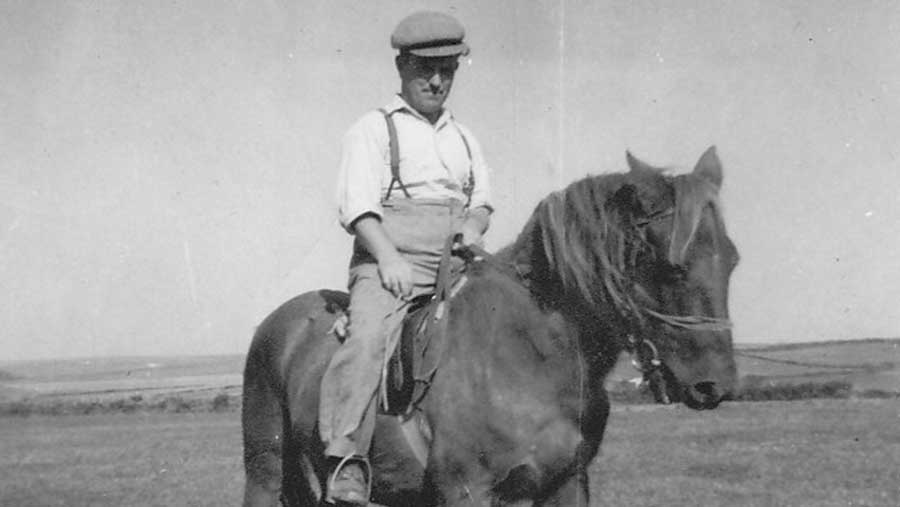 “Nobody missed the irony that Tom’s son married a Miss Tom,” says Juliet. “I was actually born here at Trewiggett, and my sister’s children are the eighth generation to reside in St Kew parish.”