The View From Here is the series in which farming women give an insight into rural life around the world.

We catch up with people around the globe to get a sense of the joys and challenges of life in the countryside.

From New Zealand and France to the US and Uganda, we get a flavour of the joys and challenges.

Here, Megz Reynolds gives us a glimpse of her life in south-west Saskatchewan, Canada. 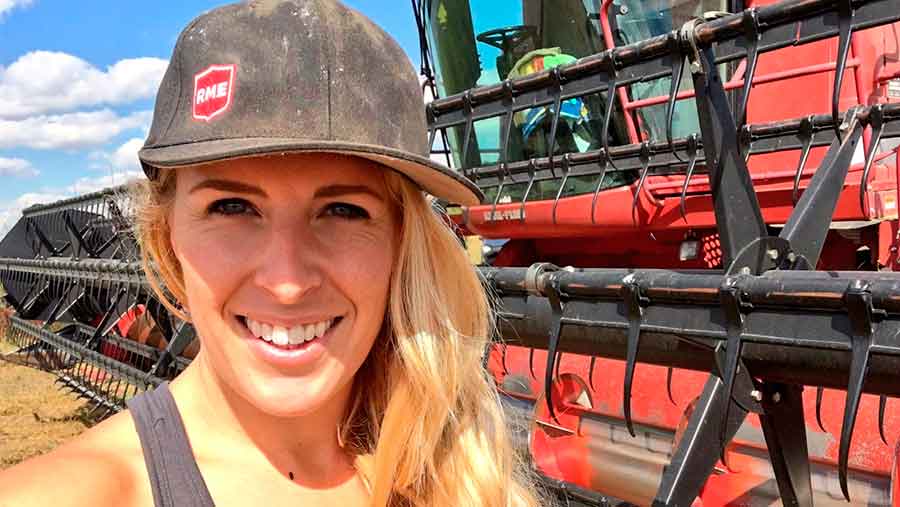 What sort of farm do you live on?

We are mainly crop farmers. We grow lentils, barley, canola (oilseed rape) and flax for seed.

We usually start seeding at the end of April or beginning of May and harvest usually starts in the second week in August. We currently farm 728ha but every year we try to grow a little more, usually through bidding on land to rent.

We also have a small herd of black Angus cattle. We calve them in the spring around March and then take those calves to market in autumn. They are bought to be finished for meat production.

My husband and I run the farm together. My husband works off farm so during the day, while he is at his other job, I run the equipment during seeding or harvest. When I moved out to the farm from the city (I used to work in the film industry), I took a job as an apprentice heavy-duty mechanic so I could learn to fix equipment.

Our area is mainly crop land, but when you get into the hills around the rivers there is more native grassland that is used for running cattle that wouldn’t make a good crop field. A lot of farms are a mixed operation of both grain and cattle.

I cannot speak for the whole country as it is so huge and diverse. In Saskatchewan, it is mixed – there are some very large family farms and some very small hobby ones. There are farms that do well, but at least one member of the family works off farm to have a consistent wage. Farming is so variable – one year there might be bumper crops and great cashflow, and the next can be a struggle to make ends meet.

What’s the best thing about living on a farm?

It’s the lifestyle that it affords my family. I love being outside most of the day and working with my hands. I love how every day is different and has a new challenge. I love that we raise our own meat and eggs and that we grow our own produce in the summer. I love that my girls (aged three and one and a half) are growing up knowing where their food comes from and how to grow it – and that they will know and respect an honest day’s work.

The most challenging thing about living in a rural setting as a parent is childcare, which our community doesn’t have at the moment. Coming from the big city, I also miss ethnic food – there’s only so much deep-fried bar food you can eat!

Farming is so variable – one year there might be bumper crops and great cashflow, and the next can be a struggle to make ends meet Megz Reynolds

What’s the single biggest challenge farmers face where you are?

The ever-changing weather and how we can’t do anything to control it. One year, everything lines up and we get bumper crops, then the next, most of our crops are destroyed by hail and what’s left to combine is worthless because of disease from extreme amounts of rain during the growing season.

In Saskatchewan, we have a huge variation in temperature between summer and winter.

In the summer we can get up to 40C and the winter can be -60C with wind chill!

I have lived here going on five years now and I don’t think I have ever seen a “normal” weather year.

Last year, we had 38in of rain during the growing season and harvest and the average would be around 8in, I believe.

Four winters ago, we had snow drifts as tall as the tree rows, but in the last couple of winters, we have only had a couple feet over three or four months.

I get a huge kick out of the conversations I have with my toddler. So cute!

The weather and breakdowns frustrate me the most.

It also feels like farming can best be described as “disorganized chaos” most days. When I was seven months’ pregnant with my second, I went to the farm to start banding fertiliser and the tractor needed diesel. I tried to fill it up and realised the power had gone out so the fuel pump wouldn’t work. I went to our 1952 Chevy truck that had a generator on it and tried to start it and the battery was dead. I sat there and said a couple of choice words before moving onto the next step…

This is a hard question and everyone would answer it differently. There are still women being paid less than men, but working the same job. There are women who feel treated differently because of their gender, not their abilities – and there is a large “women in ag” movement.

I fully believe in equality and equal pay and support women groups as they have come together because there is a need.

Personally, though, I have worked in male-dominated industries my whole life and have never felt like I have been treated differently or respected less because I am a woman.

Is farming well supported by your government?

Federally, the Canadian government supports farmers and I believe recognises that farming is a huge industry and contributor to the country’s economic well-being. That said, the Saskatchewan provincial government has supported its farmers more than the federal government in the past 10 years.

I am a pretty open and transparent person so this is tricky. If you follow me on twitter @farmermegzz than you already know a lot about me! But I love extreme sports and one of my front teeth is fake because of a snowboarding incident involving a cliff drop and biting my own kneecap.