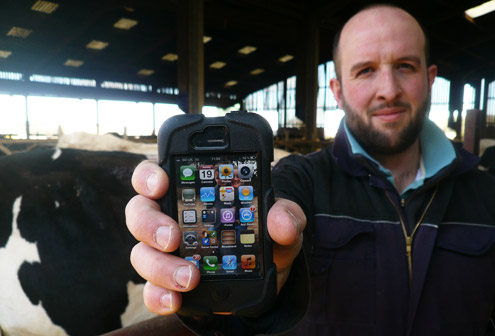 Few things have changed in the world quite like the mobile phone.

From Del Boy’s prodigiously-sized portable to tiny touchscreens, there is now something for everyone.

And Farmers Weekly’s 2011 lifestyle quiz went to prove it, showing the mobile phone as the one gadget that 56% of those questioned couldn’t live without.

Clever phones have been sitting in the jacket pockets of company bigwigs since 1994, but it’s only in recent years that things have really taken off.

The driving force is applications or ‘apps’ which have changed almost unrecognisably from the days of poorly-graphiced games on outrageously sized handsets.

The average phone today boasts a camera good enough to put your standalone digital to shame, as well as media players, diaries and social networking.

We asked four converts to smartphones to tell us about their experiences of using the technology around their farms.

Read their experiences below. There is also a glossary to help you with smartphone jargon and a review of five apps for farming.

You can join in too by completing our survey on smartphones. 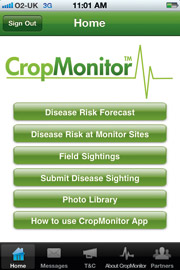 Gives wheat disease forecasting and allows user to submit disease sightings to share with other users. Current and future risk is also shared from 13 trial sites across the UK. A photo library aids identification of key diseases. Available on iPhone only. (£2.99)

Useability 3.5
The reviewers were frustrated by the app, citing that it is not quick to start using. “It requires a form to be filled in and submitted to obtain a username and password,” says Mr Redman. “Once it is set up though, it is easy to use and quick to load pages.”
“It seems to take an age to log in, so ideally you need to use wifi, which isn’t always practical when out in the field,” explains Mr Freestone.

Usefulness 3.25
Despite the app being described as very useful for identifying disease and assessing disease risk, it relies on users for some of the information it supplies.
“The field sightings part is a good idea to help build a better picture of disease findings, but there aren’t many users uploading information so it’s not working to its full potential,” says Mr Redman.
“It could be quite helpful when looking at key fungicide timings, and I like the sightings option but it’s still showing data from 2011,” adds Mr Freestone. 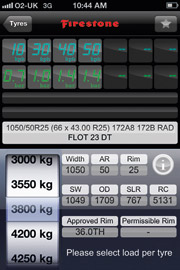 An app that helps the operator calculate the optimum tyre pressures to increase safety and efficiency when using Firestone tyres. It also contains listings of all Firestone dealers throughout the UK. Available on iPhone and Android. (Free)

Useability 3.25
The Firestone app is quite complicated and requires a lot of information to use it, says Mr Freestone. “You need load per tyre which can be quite difficult to ascertain if you have a full grain trailer on the tractor,” he adds.
“It lists every tyre model rather than just tyre size so can be difficult to get the information that you need, although it is free, so good to have a play around with,” says Mr Redman.

Usefulness 3.25
Our panel points out that more attention needs to be paid to tyre pressures when considering fuel consumption and compaction in the field.
“It provides a lot of detail about the tyres, pressures, rims, maximum speeds and weights, so it’s very specific,” says Mr Galloway.
“It’s a great app in principle,” says Mr Price. “It’s just a shame that I don’t own a single Firestone tyre.” 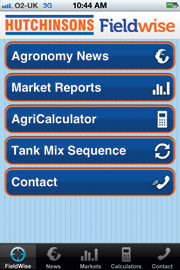 Provides market reports and agronomy news and in addition has practical tools for calculating seed and fertiliser rates, tank mix sequences and a unit converter. Available on both iPhone and Android. (Free)

Useability 4.25
“It’s really easy to work as you can navigate around the sections through the main menu or through the tabs along the bottom,” says Mr Freestone.
“It can be a bit hard to change values on the Agricalculator though,” Mr Redman points out.

Usefulness 4.25
The reason why iPhones are so useful, says Mr Price. “It’s the Agricalculator that makes this such a brilliant app. Even though you may know many of the conversions anyway, it’s nice to have it there in front of you,” he explains.
“It’s a terrific app, as it allows you to keep track of most aspects of the agricultural sector. The information on there seems to be up to date, keeping tabs on global prices such as wheat, corn and crude oil,” says Mr Galloway.
Despite this, Mr Freestone notes that the NIAB TAG section had not been updated for over a month. 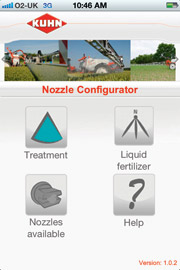 Useability 3.25
The Kuhn app is simple and easy to use and a good resource if you are in the yard and need to make a quick decision on which nozzle to use.
“It’s very easy to understand and work through, although you need a steady finger to select water volume, speed and wind conditions. It has a clear help section and a great resource to have,” says Mr Freestone.

Usefulness 3.25
The usefulness of this app is somewhat limited by the fact that it only lists Kuhn nozzles.
“It’s a great idea but a shame it doesn’t list common nozzles. If it did it would be a good app for spraying and liquid fertiliser application,” says Mr Redman.
“It does give a litres/min output for the given variables which is a good reference when using a nozzle chart,” he adds. 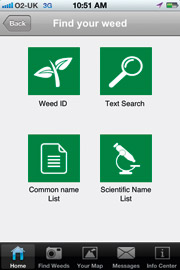 Developed with ADAS this app is a weed encyclopaedia on your phone containing over 140 weeds species with more than 1,000 pictures. Mapmyweed tool allows pinpointing of weed discoveries on Google maps. Users can share photos and location with customers/colleagues. Available on iPhone only. (£2.99)

Useability 3.5
Our panel generally found the app easy to use, although Mr Price found it a little confusing to navigate around.
“It took me a while to realise that you can scroll horizontally through weed pictures in a search,” says Mr Price. “Having said that, the ability to save the weed location on the map and email is really good,” he adds.

Usefulness 3.5
“It’s a really useful app if you are not 100% on your weed identification,” says Mr Redman. “It has great descriptions and pictures to help identify weeds, and is much easier to carry around than the BASF weed book,” he explains.
“It’s a good point of reference for more obscure weeds and especially grasses. The comparison aspect is a neat feature too. Worth the money at £2.99,” says Mr Freestone.