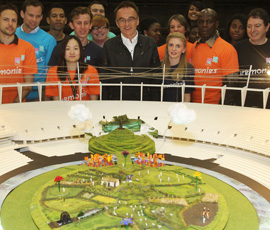 The British countryside will be centre stage at the £27m opening ceremony of the London 2012 Olympics.

The Olympic Stadium will be turned into rolling fields – complete with real livestock, crops, grass meadows, a thatched cottage, cricket match and model of Glastonbury Tor.

Artificial clouds will be suspended from overhead wires during the “Green and Pleasant” opening scene, which is due to take place in London on 27 July.

The set will show farmers tilling the soil among grazing livestock, including a flock of 70 sheep and three cows.

In total, the Isles of Wonder spectacular is scheduled to last for three hours. It is expected to be seen by a worldwide TV audience of more than one billion people.

“The ceremony is an attempt to capture a picture of ourselves as a nation, where we have come from and where we want to be,” he said.

On entry to the Olympic Stadium, the audience would see a scene that represented a traditional and idyllic view of the British countryside.

The set would be include fields and rivers, and feature families taking picnics, and sport being played on the village green.

Each of the four home nations will be represented by their national flower – the rose of England, the thistle of Scotland, the daffodil of Wales and flax from Northern Ireland.